Trump Of The North 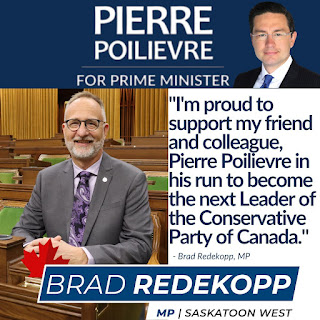 In his quest for the leadership of the Conservative Party, Pierre Poilievre is following Donald Trump's playbook. Susan Delacourt writes:

Show him an institution and Poilievre will knock it down — the Bank of Canada, the media, anyone deemed a “gatekeeper,” or the World Economic Forum. He doesn’t just disagree with his opponents, he calls them liars.

At the risk of giving the “freedom” candidate any more ideas, it should be noted that there is one institution Poilievre hasn’t directly challenged, at least not yet — democracy itself. But if Poilievre is going to go full Donald Trump in his bid to be the next prime minister, an assault on the legitimacy of the voting system is almost inevitable.

His stepped-up campaign against the World Economic Forum — declaring this weekend that a Poilievre government would ban Canadian officials from involvement with it — veers very close to the suggestion that the democratic system is rigged.

On the holiday Monday of a long weekend, as many people in his own Ottawa-area riding were cleaning up damage from the megastorm, Poilievre was tweeting comments from WEF chair Klaus Schwab as proof of an international governance cabal.

Like Trump, Poilievre has gone over to the dark side:

Generally, politicians don’t start suggesting the system is rigged unless they’re losing. Trump was fine with the U.S. voting system after the 2016 election, but not so much after Americans chose Joe Biden over him in 2020. (Pause here for Trump enthusiasts to assert again that Biden is not the real president of the United States.)

Poilievre currently has little reason to question a voting system here in Canada that has given him seven election wins since he was 24, several senior roles on the government benches and a pension that will keep him in six-figure salaries for the rest of his life.

But he is trying to lure support from people with a shaky knowledge of the system of government in Canada — the convoy protesters, for instance, who camped out in front of Parliament Hill for three weeks this winter to call for an end to pandemic restrictions imposed by provincial governments.

I am, to be candid, worried that Poilievre won’t be able to stop himself from whipping up suspicion about why Conservatives have been losing elections — it being far easier to blame a rigged system than the party’s own internal problems.

Like Mr. Trump, Poilievre knows he doesn't have the votes to become Prime Minister. And, if he can't get what he wants, he's willing to bring the house down.

"Poilievre knows he doesn't have the votes to become Prime Minister."

Does that claim come with your standard money-back guarantee? ;-)

"Skippy" is really the representation of everything wrong with political society today. Young, unruly, and inexperienced in life. They are loud and unable to undertake legitimate debate with out resorting to insult and rudeness. I would like to introduce my particularly favourite insult to explain my feelings towards these far right asshats. Backpfeifengesicht, the German compound word loosely translated as a "Face deserving of a slap" or punch. It's meant for truly irritating people, which best describe the little pissant.

Nonsense, he clearly realizes how corrupt the election system is since that has to be the only way he keeps winning. /s

Given where his riding is, I am surprised he has held it that long but I must be not understanding the demographics.

Skippy may have gone over to the "Dark Side" but I get the impression that, like Jason Kenny, that happened in his youth. He just realized that it was not a great idea to look like a raving loonie back when he was 24. After Harper, Trump and the Convoy he is letting the inner loonie take over.

I wish it did, PoV. Still, I don't think Poilievre sees the whole country.

He got into politics straight out of university, zoombats -- not a good recommendation for any politician.

Of course it does. OTOH, I rememer a couple of political pundits laughing loudly at the unlikely change of President Trump and Prime Minister Johnson.

And Emperor Caligula planned to make his horse a Roman consul, jrk. Let's hope this plan runs aground.

And Emperor Caligula planned to make his horse a Roman consul, jrk.

At the less than pointy end; we; those who do the electing, have had the same horses arse represent us for way too many years.
I fear for Democracy as much as I fear it's inadequacies..
The Republican party of the USA has blown wide open and exported the values of the Magna Carta
Which transferred the command of the King to the Oligarchs of the the day, the Lords!!

The Republican Party, TB, is a wholly-owned subsidiary of the oligarchs.