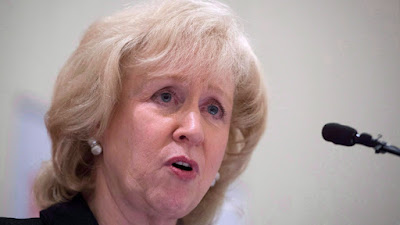 If you want to know how far the Conservative Party has devolved, consider former prime minister Kim Campbell's comments on what's going on there now. Sarah Turnbull writes:

Amid discussions about the battle for the soul of the Conservative Party, former Prime Minister Kim Campbell says without leadership on policies such as climate change, the party’s identity will remain in question.

“Canada has got to be part of the solution to climate change and the fact that there could be any party that drags its feet is just so depressing.”

Campbell is no friend of Pierre Poilievre:

The former leader also weighed in on Pierre Poilievre’s attacks on the Bank of Canada, and specifically comments that Governor Tiff Macklem should be fired for failing to manage soaring inflation.

Yeah, he should have predicted you know, the disruptions of the COVID supply chains and the war in Ukraine, right? Yeah. Get rid of the dude, he's not consulting his tarot cards. Grow up,” she said.

And on the independence of Canada’s central bank, she said “when people are appointed to hold independent positions you need to suck it up and respect that unless there is clear evidence that what they are doing is either incompetent or done in bad faith or dangerous.”

The party is obviously not Campbells's Party. It's not Joe Clark's Party. Or Brian Mulroney or Bob Stanfield's Party.

Email ThisBlogThis!Share to TwitterShare to FacebookShare to Pinterest
Labels: The Devolution Of The Conservative Party

Not by a long shot, Anyong.

I’ve said it before and it becomes more evident by the day and certainly by the election, the CPC needs to dump the reform contingent. They must or they will be completely swallowed up by them and the actual conservatives in the party will cease to have any say whatsoever. They must or they will be forever tarred by the same brush that we all who so much dislike the reform use to swipe over that swarm.
I don’t know know how they can do it frankly, it may be too late. It may be that now the conservatives need to leave and form a new conservative party, a true conservatives party. They would need to get as much space between them and the reform dominated one as possible.

Campbell also said, “That’s your job…to try and create the best public policy you can.” What a throwback!

I think you're right, Graham. But, on the other hand, I don't see a split in the party's future.

Exactly, Cap. The Conservatives believe that serving private interests is in the public interest.

Going conservative feels like volunteering for a Nantucket sleighride with no boat thru a septic system.
Don't do it.
I'm Albertan.
I know.

No, you’re right Owen, I don’t see a split anytime soon but… Maybe if PP wins the leadership ,maybe if they lose the next election,
maybe if their polling suggests it. I could see that if the more traditional conservatives see the party going in the direction of more nutbars like PP that could push them to finally try and get back to their roots.

Life must be very tough these days for Albertans, Graham.

Just as Spiro Agnew put America on the road to Donald Trump, Colin Brown put Canada on the road to this. The heirs of his legacy are still there, now helping their most recent chosen "smartest guy in the room" in his attempt to market a revised presentation of jumbled paragraph subtitles as "complexity". The flat foreheads are the new "critical thinkers".

"After years of the simplistic politics of Justin Trudeau and Jagmeet Singh, where virtue-signalling and endless government spending replaces restraint and long-term thinking, Canadians are seeing the consequences of that approach. ...

"Clearly, more and more Canadians are ready for the complex, idea-focused campaign of Pierre Poilievre."

Can you still laugh and puke at the same time?

Alberta is the most expensive Province to live in. Except for the bribe at the pumps at the moment. That happens to be the reduction of gas prices which we are paying for regardless of what Twinkle Toes says. JK thinks we do not see what he is doing. Anyong

Here in Ontario, Graham, two parties have splintered off from Doug Ford's PC's. Perhaps Poilievre will be the father of further federal Conservative dissolution.