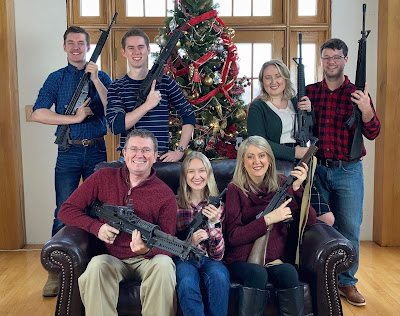 A week after a kid walked into a Buffalo supermarket and killed 10 people, another kid in Uvalde, Texas walked into an elementary school and killed 21 people, 19 of them children. Max Boot writes:

We are now embarked upon a distinctively American ritual such as the Super Bowl or the Fourth of July — only much, much grimmer. We are, for the umpteenth time, in the immediate aftermath of a mass shooting. Nineteen children and two teachers were just massacred at an elementary school in Uvalde, Tex., by a teenager who had been able to legally purchase two AR-15-style assault rifles — weapons of war — as soon as he turned 18 years old.

As usual, both Democrats and Republicans react with horror but with widely divergent perspectives on how to respond. Anguished Democrats call for more gun regulation. That makes sense since America not only has more guns in private hands than any other nation in the world (nearly 400 million) but also some of the world’s loosest gun laws. But Republicans want to do, essentially, nothing. They fiercely resist calls to make it harder to buy and carry guns with a variety of deceitful dodges that are no less contemptible for being so familiar.

The most common reaction on the right is to offer, as the Internet meme has it, “thoughts and prayers.” It’s as if Uvalde had been struck by a hurricane or tornado that we poor humans can do nothing to affect. Indeed, Rep. Lauren Boebert (R-Colo.) tweeted, “You cannot legislate away evil.” That is not, of course, the Republican reaction to Islamist terrorist attacks. After Sept. 11, 2001, they did not shrug their shoulders and say “What can you do?” They worked with Democrats to massively beef up airport security while also launching invasions of Afghanistan and Iraq.

Likewise, Republicans have no problem passing legislation to address the perceived evils that concern them — e.g., abortion or critical race theory. Many members of the “pro-life party,” however, simply do not appear to view the murder of children who are out of the womb as an issue that cries out for a legislative solution.

Rep. Marjorie Taylor Greene (R-Ga.) opined that “We need to return to God,” as if religious fanatics never perpetrate violence. She also echoed a common refrain on the right: “Our nation needs to take a serious look at the state of mental health today.” No doubt that’s true, and she’s Exhibit A. But (a) there is no evidence that the United States has more mental health problems than any other country and (b) Republicans consistently oppose more funding for mental health services. Indeed, conservatives are targeting mental health programs in many schools for elimination.

The reaction on the right is not merely stupid. It's insane. Full stop.

Email ThisBlogThis!Share to TwitterShare to FacebookShare to Pinterest
Labels: The Texas School Shooting

I believe some Republican politician(s) in Texas are calling for teachers to be armed. I can see you, Owen, getting ready to leave for work. Check list: Pens, class lists, copy of Hamlet, Glock, note pad, marked papers, spare magazine, packed lunch.

The USA has always thought itself exceptional and it is. Unfortunately this is not praise.

The people making these suggestions obviously know nothing about teaching or schools, jrk.

One of my siblings, Owen, watched a documentary on TV (don't know if it was US or Cdn station) but it was about researching why there are an inordinate number of young males in the US, in and around the age of 18 going out with a powerful weapons and shooting up schools and other places where people gather.

This particular group concluded that there were some commonalities: primarily, that these kids tended to be "home schooled" and therefore not experienced in the normal socialization that takes place in schools, starting in kindergarten through high school and grew up in a home that had a proliferation of firearms in it.

Of course, this conclusion can be subjected to all sorts of interpretation, depending on your view of the "gun mentality" that seems to proliferate in the US, but it sure gives me pause for thought. It certainly does give one pause for thought, yes?

I wonder it they can tie their own shoes.

Absolutely, Lulymay. It's painfully obvious that they lack what we used to call "social skills."

I suspect that they have trouble figuring out which shoe goes on what foot, jrk.

She also echoed a common refrain on the right: “Our nation needs to take a serious look at the state of mental health today.” ,,,,,,,,,,

I peruse the right wing US radio media who are , at this time, once again fighting fit against any gun control whilst placing the blame on those with mental health issues the very ones they deny medical care to!s

The lure of cheap goods from US/ Canada border towns and cities, with cross border shopping, blinds Canadian attitudes to the disgusting sole destroying USA lifestyle.
That lure could well destroy the wonders of Canada.

Certainly, TB, the Conservative Party sees its future as an imitation of the American Nightmare.

" Today UNICEF stated that Yemen has surpassed 10,000 children killed or maimed in the conflict."

There's a lot of insanity in a lot of places, PoV.