A World Of Problems 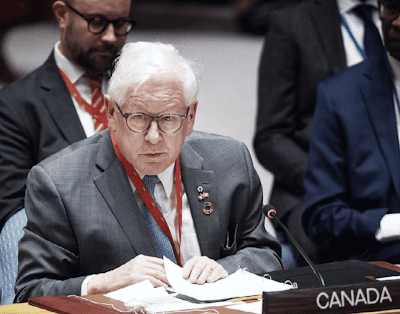 We live in a world of problems. Bob Rae writes from the United Nations:

We are meeting at a time of major disruption in the global economy, geopolitics and politics, the sustainability of the planet, global public health, the pace of technological change, and the inevitable human consequences of all of the above. The situation does not lend itself to simple bumper stickers, but we have become used, here at the UN, to referring to “a cascade of crises”, that fall into and amplify each other, and continue to have powerful consequences for the world, and inevitably for all of us.

While I have been here as Canada’s Ambassador, this was my first UNGA high-level week, which is really ten days of nonstop speeches, side meetings, breakfasts, coffees, pull-asides, lunches, more coffees, dinners, and for the strongest among us, late night conclaves.  After two years of Zooms, FaceTimes, Webexes, MS Teams and every imaginable platform, it was all in person and in your face.  The world we faced was an even bigger mess than what we faced before the Great Distancing of March 2020.  Canada more than held its own, but it was hectic.

What is Canada's place in the world?

Canada is — by virtue of its history, geography, demography, social makeup and economy — directly implicated in the world.  We are an indigenous country, an Arctic country, a country of the Atlantic, the Pacific, the Americas, and thanks to our dramatically shifting demography because of immigration, a country that is tied to every other country, language, and history, in the world. We are a trading nation, a country whose GDP depends on our economic interdependence with the rest of the world. We are members of a multitude of alliances, agreements, and associations. There is no part of the world that is far away or remote from us.  This is who we are.

And we cannot withdraw from the world:

Any attempt to ignore our global situation is bound to fail. The UN and multilateral agencies around the world are a critical place for us to do our business.

The most pressing problem at the moment is the war in Ukraine:

The issue for us is, how much do we care about these values and institutions? Four hundred years ago, Blaise Pascal wrote that “Justice without force is powerless, and force without justice is tyranny”.  We cannot afford to be powerless in our response to aggression.

But we face a myriad of issues:

COVID19’s effects on the global south have been serious, on both the health and economic fronts.  This will become a more serious issue this year and next, and we can expect continued pressure on global food and financial systems.

Conflict has been exacerbated, particularly in Africa, but elsewhere as well. This puts pressure on UN Peacekeeping and conflict prevention, but also on the global humanitarian situation, which is now more serious than at any point since the Second World War.  There are more displaced people, internal migrants and refugees, than even before. The challenge of responding adequately to this crisis is great.  Somalia and Pakistan are the immediate crises, but there are many others.  Our development and humanitarian budgets will be stretched, and will test our global commitment.

Climate change will require greater efforts in mitigation (lowering emissions) and adaptation. The broad crisis in development is made even worse by climate change.

Since Kyoto, we have seen some progress in reducing the pace of the increase in emissions, but have consistently missed targets both at home and globally.  The painful reality for Canada is that we are a large per capita emitter and a small global emitter.  We can’t have much credibility without taking measures that will continue to be domestically challenging.  The upcoming COP27 meeting at Sharm El Sheikh in November will focus as much on issues of adaptation and climate finance as on the reduction of global emissions.  China and Russia will use the disruptive impact of the invasion of Ukraine to point out that Western rhetoric exceeds its delivery. The most important message on climate is that it is today’s issue and today’s crisis. It is not something that happens in 2050 if we fail to meet our targets. It is a crisis of today, not of tomorrow.

Russia’s behaviour in Ukraine has its parallels in other countries taking the law into their own hands, which puts international mechanisms of accountability under great pressure to deliver.  China in Tibet, Hong Kong, and Xinjiang, comes to mind as a particular challenge, but there are others.

We can no longer talk with any confidence of a “rules-based order” because the rules are being broken too often for those words to trip meaningfully off the tongue. The phrase that we have used since the Atlantic Charter was signed in Washington in January 1942, the war aims that united the Allies against the common foe, and underpinned the founding of the United Nations in 1945, is not respected by many governments. Any doubt about this has been swept away by Russian invasion of Ukraine, and the uneven response to this invasion from the rest of the world.

The world has never been an easy or languid place. It certainly isn’t now. Canada’s greatest orator, Thomas D’Arcy McGee, reminded his fellow Canadians in the debates on Confederation that “We are in the rapids, and there is no turning back”.  It shall take all our skills to keep us on an even keel.

Email ThisBlogThis!Share to TwitterShare to FacebookShare to Pinterest
Labels: Bob Rae From The UN

We live in a society that we have created, and it's clear that that society is not working. Governments tinker at the edges of our problems but don't really do much. Most, if not all, problems we face are rooted in money and/or power. It's time to create a new, egalitarian society but I can't see that happening.

Big money calls the shots, Gordie. Until that changes, not much will change.

I am tired of this 37million population country spending and sending billions of dollars to these organizations and countries. I am 69 years old and have voted since 18-66 I haven’t voted federal or provincial and cannot see any reasons why. These elected governments actually do nothing to make things better for the citizens of this country. Since 18 yrs of age till now things are worse. As I said previously too much money leaves this country in stead of keeping it in Canada to improve life of Canadian citizens. One example is our Healthcare. Who is to blame for it’s demise? We are actually watching it collapse while the so called politicians are encouraging it . What do they do? Make up a dental care system, with what for financing. Seniors in poverty. 10,000’s homeless, nothing being done. Money sent to other countries to help there homeless. I won’t text the explicit language I am capable of in regards to what is happening.
As for Bob Ray he can take his dialogue and stick where the sun don’t shine.
The more I read the more things will stay the same. We need massive change.

Will remember to initial. JH