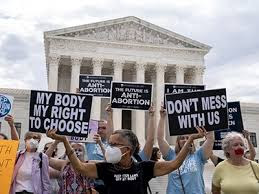 If you thought that the U.S. Supreme Court's last session was horrific, Ruth Marcus writes that you ain't seen nothin' yet:

Nothing in the behavior of the court’s emboldened majority suggests any inclination to pull back on the throttle. The Supreme Court is master of its docket, which means that it controls what cases it will hear, subject to the agreement of four justices. Already, with its calendar only partly filled, the justices have once again piled onto their agenda cases that embroil the court in some of the most inflammatory issues confronting the nation — and more are on the way.

Last term, in addition to overruling Roe v. Wade, the conservative majority expanded gun rights, imposed severe new constraints on the power of regulatory agencies and further dismantled the wall of separation between church and state.

The court is marching on toward fresh territory, taking on race, gay rights and the fundamental structures of democracy — this even as the shock waves of the abortion ruling reverberate through our politics and lower courts grapple with a transformed legal regime. And there’s every indication that the court intends to adopt changes nearly as substantial — and as long sought by conservatives — as those of last term.

The conservative justices are in a hurry:

In assembling its cases for the term, the conservative wing has at times displayed an unseemly haste — prodded by conservative activists who have seized on the opportunities presented by a court open to their efforts to reshape the law. The court reached out to decide a dispute about when the Clean Water Act applies to wetlands, even as the Environmental Protection Agency rewrites its rules on that very issue. It agreed to hear a wedding website designer’s complaint that Colorado’s law barring discrimination on the basis of sexual orientation violates her free speech rights to oppose same-sex marriage, even though Colorado authorities have not filed any complaint against her. It took the marquee case of the term — the constitutionality of affirmative action programs at colleges and universities — although the law in this area has been settled and there is no division among the lower courts.

“They’re impatient,” Harvard Law School professor Richard Lazarus said of the conservative justices, especially the longest-serving, Clarence Thomas and Samuel A. Alito Jr. “They’ve spent a lot of time waiting for this majority to happen, and they don’t plan to waste it.”

They're doing this even as a majority of Americans see the court as a political weapon:

If the majority insists on its current and hurried path, it risks deepening the very questions about the court’s legitimacy that have tormented the justices — divisions reflected in the bellicosity of their written work and that have erupted, in recent weeks, into their public debate. At a moment of extreme and increasing national division, change of such velocity and breadth is unhealthy not only for the court but also for a nation being asked to abide by its rulings.

Nearly 80 years ago, Judge Learned Hand observed that “the spirit of liberty is the spirit which is not too sure that it is right.” By contrast, “this is a court that is very convinced of its righteousness,” said Stanford Law School professor Pamela S. Karlan. “This is a court on which there are a number of justices who are very eager to push the law in directions they prefer, and they don’t think to themselves, ‘We should go slow on these things.’ ”

Email ThisBlogThis!Share to TwitterShare to FacebookShare to Pinterest
Labels: The US Supreme Court

Except for a brief time a half-century ago, the US Supreme Court has always been politically conservative. It has a long history of horrendous human rights and labour decisions, and is one of the reasons the US stands alone among countries in the Anglosphere in retaining capital punishment. Of course, the conservative justices will push the law in directions they prefer - that's their job after all. It would be naive to pretend otherwise.

It's a sad history and a sad legacy, Cap.

There was an interesting bit of film up which outlined how many people sat on the Supreme Court over its history. It also pointed out at one time Rosevelt increased the number of justices so laws could be passed, such as the min. wage act, etc. Perhaps Biden will take the same steps, if this continues. The unravelling of law in the U.S.A won't come to any good end.

What happens in the U.S.A could well spill over into Canada. We have to look no further than then Quebec's politician who said, immigrants didn't work, etc. Racism alive and well during election time in Quebec.

The intolerant side of some in Quebec is showing its face these days, e.a.f.