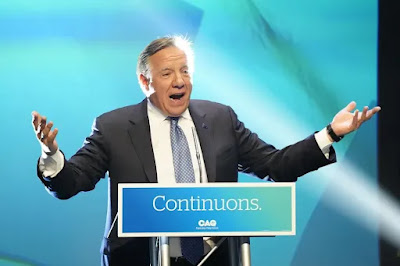 The Quebec election confirms that things have changed since we lived there. Forty years ago, the battlelines were between the Liberals and the Parti-Quebecois. Now four provincial parties duke it out. Chantal Hebert writes:

Until 2018, the Quebec Liberals and Parti Québécois played the leading roles in the debate over the province’s political future. On Monday, both recorded historically low scores in the popular vote.

The Liberals were essentially shut out of francophone Quebec. The PQ — with a mere three seats including that of leader Paul St-Pierre-Plamondon — will have to struggle to make itself heard in the provincial legislature.

The reason Legault won handily is the same reason our elections are contentious across the country -- the first past the post voting system:

The discrepancies are significant. The system inflated Legault’s victory. With almost the same vote share, the Liberals held on to the role of Official Opposition with 20-plus seats while the Conservatives — subject to a recount — won none.

But when it comes to the prospects of electoral reform, the Quebec proponents of a more proportional system are flogging a dead horse, one that is well on the way to the glue factory.

With the CAQ and Liberals both beneficiaries of the current system, unicorns will surround the legislature before the issue of electoral reform is live again within its walls.

More so than any policy, it is the CAQ’s positioning as a haven for federalists and sovereignists willing to focus on a common nationalist agenda that left the other parties fighting for crumbs in Monday’s election.

As the election demonstrated, none of Legault’s rivals holds enough cards to offer Quebecers a comprehensive alternative government, and irreconcilable differences stand in the way of any substantial alliance between any combination of them.

So what does the future hold?

Legault will not push sovereignty, but he will push the sovereignty of the French language -- which will mean further restricting the language rights of Quebec's anglophones and allophones -- those whose first language is neither French nor English.

And there are other battles on the horizon:

A showdown between the provinces and federal government on health-care funding is looming. Trudeau wants more input on where the money would be spent. But the prime minister could end up in a tug of war with Quebec and Ontario over the introduction of more private input in the public system.

On the environment, Legault wants the federal government to take a pass at assessing his government’s major infrastructure projects. Those include a controversial tunnel to link the Quebec south shore with the downtown core of the provincial capital, and the building of more dams to increase the province’s hydro output.

On the CAQ’s contention it should have total control over immigration to the province and against the backdrop of the party’s record on minority rights, the two governments seem headed for a major collision.

And then, of course, they will likely fight each other in the Supreme Court over bills on secularism and language.

So don't expect a detent between Quebec City and  Ottawa.

Email ThisBlogThis!Share to TwitterShare to FacebookShare to Pinterest
Labels: The Quebec Election

It is time for an Egalitarian System in this country. Anyong

It's not going to be easy to get there, Anyong.

It is unfortunate that the Premier was re-elected with a majority. Their actions in their previous term leads me to conclude they're a bunch of racists and the comments by one of their candidates during the election supports that.

It might be about time to give Quebec a wake up call. Don't play nice and you don't get the money Ottawa sends. Quebec's treatment of English and other language speakers is not acceptable and neither are their laws concerning "religous" symbols.

Perhaps its time to deal witht the racist attitudes in Quebec. Unless they are challenged it is not going to get better.

I've never been keen on Quebec leaving Canada, but these days, I'd just as soon kick them out of Canada. Of course the Indigenous People would keep their traditional territories and would decide what to do. I'd like to see how Quebec with a smaller land base and no money from Ottawa. We would see if the racists there would be singing the same song they are now.

The problem with separation, e.a.f, is that Quebec is in the middle of the country. Separation would cause horrendous problems.

For all intents and purposes, it appears to me that the politically-inscrutable Quebecois have achieved a sort of "sovereignty association" under the CAQ and Legault.

In its self-spun cocoon, Modern Quebec is soul-less and insecure while it thumbs its nose at Canada and many contemporary civil-rights. Not 'woke' in many ways. (The roots go deep, For example Pierre Valliere's cultural appropriation tome back in 1971 that ripped-off a truly disadvantaged group.)

It is to my knowledge, the only place in the world that puts arret on a stop sign.
"Are there stop signs in France? Yes, the stop signs in France look the same as in the UK, and, helpfully, they usually even display the English word 'stop' rather than the French equivalent 'arrêt'."

"The problem with separation, e.a.f, is that Quebec is in the middle of the country. Separation would cause horrendous problems."

Wait! There is another province " in the middle of the country. " going this way:
"Albertans will learn today who the new premier of the province will be."
"The leadership debate has been dominated by ways the province can assert greater independence from the federal government."
They are just itching to thumb their nose at Canada and many modern civil rights.

Both Alberta and Quebec contempate separation, PoV. But both are landlocked. seems to me that fact should stimulate some re-evaluation.