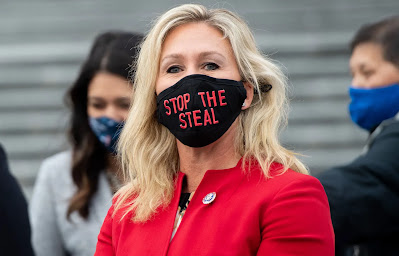 Marjorie Taylor Greene is no intellectual giant. But she knows what she's doing. These days she has taken to calling Joe Biden's government a "regime." Greg Sargent writes:

The term “regime” is a mainstay of Greene’s political vocabulary, and right-wing authoritarian nationalists in Congress and the media are using it more and more prominently. Understanding the term is essential to grasping what’s happening with today’s MAGA-fied right and why some experts fear we may be hurtling toward rising political violence and instability.

Greene is on the leading edge of this trend. After the Mar-a-Lago search, she suggested that only “countries during civil war” typically see such “rogue” behavior by the state. Soon after, the term “regime” quickly became central to the right’s Mar-a-Lago narrative as a way to express that thought.

It’s telling that all the “regime” talk exploded after the Mar-a-Lago incident. After all, the search was authorized by a judge who saw probable cause to believe that three federal statutes may have been violated. It ended up recovering reams of classified documents that Trump hoarded, after his own lawyers suggested to investigators that none remained.

To call this the work of the Biden “regime” is really to say that the act of applying the law to Trump will be treated as fundamentally illegitimate. When Greene claims this is the stuff of civil wars and rogue regimes, she really means that holding Trump accountable to the law should be regarded by his supporters as an act of war.

Conservatism scholar Joshua Tait explains how this works in his etymology of the “regime” term for the Bulwark. The word, Tait notes, is meant to invoke a sense that a range of U.S. institutions — the administrative state, the media, universities, etc. — have been irredeemably captured by the left, creating a “regime” that in some vague sense exercises hidden but tyrannical control.

As Tait writes, in this formulation, Trump is the tribune of “the people” — selectively defined — who is waging war on their behalf against this disguised tyranny. The “regime” has fought back with more oppression, which proves the truth of the original formulation in a conveniently self-reinforcing loop.

“What do people ultimately do to regimes?” Tait asks rhetorically. “They topple them.” To call the legitimately elected Biden administration “the regime,” Tait argues, “is an implicit call to overthrow it.”

Steven Levitsky, a scholar of democratic breakdown, sees this as roughly analogous to Latin American countries in which the concerted delegitimization of elected governments was followed by coups.

“To call a democratically elected government a ‘regime’ is to deliberately undermine its legitimacy and justify authoritarian and violent acts against it,” Levitsky tells me.

The mainstreaming of the term among Republicans bodes badly for what’s to come, Levitsky warns. This comes after a large swath of Republicans went all in with Trump’s efforts to overturn the 2020 election and then with placing him beyond accountability for the mob’s coup attempt, and as political violence is increasingly glorified in GOP politics.

Now the term “regime” is being employed strategically to justify the further abandonment of democracy, Levitsky notes: “This is clear evidence that a big sector of the party is now on authoritarian terrain.”

It's tempting to see Taylor Greene as an airhead -- because, in some ways, she is. But she is also very dangerous.

Greene, Poilievre, Truss ; all cut from the same cloth.
That voters can be convinced that giving more monies to a small group that will possibly hide that money away to avoid further taxation will be their salvation defies logic!
The world truly has swallowed the American dream!
Self flagellation is alive and well..
Sad part is , we are asked to welcome it!

Greene is no crazier than Danielle Smith, new premier designate of the People's Fascist Republic of Alberta, who lies like a trooper with every phrase she utters.

I see very little difference between Dems and Repugs in the USA, merely two heads of the same coin. They're both in thrall to business and the military, and let lobbyists for oligarchs write their laws, kind of like Truss in Blighty. No taxes for the rich, it inhibits their style. All kinds of sociopathic idiots in charge at federal and state levels who in no way really reflect the wants or needs of their actual populations. The citizenry is there merely to be ripped off and to pay the national, state and municipal bills through taxation, and that's about it. Nobody in power gives a damn about what John Doe thinks, and besides Biden being propped up on medication and Trump saying he can declassify secrets through his thoughts, well, the end is nigh. Reality left the room some time ago.

Same thing here in Canada. Certified lunatics like Smith and Poilievre lead the reflexively stupid to a promised la la land on the back of fake grievances, and the racist xenophobe Legault just got re-endorsed by the cultured peasants in Quebec.

Canada no longer really exists, and the US is likely to spontaneously combust soon. Britain is so far down the tubes of destruction, it may well be irretrievable, while Europe is so desperately short of energy, huge businesses are closing. The weather is turning into such pure bile from climate change that all the arm-twirling in the world cannot fix it.

Yup, that's about all she wrote for the West, and likely the world. People are scrambling for breadcrumbs, because the meal is over, and so demoralized, all society can offer up as "leaders" are total nincompoops.

Self-flagellation -- that's what it's about, TB.

On the contrary, Bill, I think you're right.

The news across the world has been particularly horrible for months, once Covid was ending and freeing up newspapers to report on other crises. But after reading your post on Marjorie Taylor Greene, this was the first time for ages I woke up in the middle of the night feeling sick to my stomach. Being a far right conspiracy theorist is fearful enough; being a woman expressing horrid views is beyond belief.