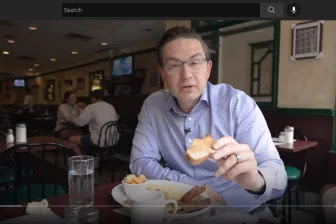 The more we see and hear of Pierre Poilievre, the more there is to dislike. Alex Boutilier reports that:

A Global News analysis of 50 of Poilievre’s most recent YouTube videos showed that they included a tag — hidden from viewers, but not from the videos’ publisher — used by a misogynistic online movement. The tag helps promote Poilievre’s videos among those circles, and signals to YouTube what users might be interested in the Conservative leader’s messaging.

The tag, #mgtow, is an acronym for “Men Going Their Own Way” — a mostly-online movement comprised of anti-feminists who attempt to cut women completely out of their lives. According to the Southern Poverty Law Center, the movement overlaps with more aggressive forms of “male supremacy.”

It’s difficult to quantify the size of the movement, and its overlap with other forms of misogyny both online and in the real world. But online spaces connected to the “manosphere” have proliferated in recent years.

Global News verified the tag was used on the videos using publicly-available software and checked it against the video’s source code.

Within hours of Global News sending a detailed list of questions to Poilievre’s office, the tag disappeared.

Poilievre’s office said the Conservative leader was unaware the embedded tags existed “and therefore was unaware they were used for uploads on his YouTube channel over the last” four and a half years.

Poilievre was also "unaware" of who Jeremy Mackenzie was despite posing with him for pictures. Mackenzie is the leader of Diagolon, a violent rightist extremist group, who is facing numerous charges, including weapons charges. Note that despite his apparent ignorance of right- wing extremist groups, Poilievre has made no commitment to find out more, or to find out and fire the person(s) linking his campaign to these groups.

Poilievre is all about stoking grievance, Cap. We only have to look south to see how that story ends.

Nobody should be surprised by Pierre Poilievre’s deceptive nature
Shocked perhaps.. that he’s somehow become the Great White Hope
for the dregs & droogs of the Stephen Harper Reform Rebranded CPC

It’s simplistic to pretend the engine behind his Pierre 4 PM vanity campaign
is not run by the same suspects from the 2011 Live & RoboCall Election Fraud
They specialize in secretive Data Mining, Vote Manipulation & Media Deceit
Money is no Concern - they will ‘empty the tank’
Ethics ? You must be kidding.. no holds barred
this ain’t about Democracy.. it’s only about Winning

Presumably the Campaign is run out of CPC Headquarters,
Remote Proxies, Giant database storage, basement hackers
as well as Stornaway. Whether he has moved in yet is moot
Stornaway has been infested by Partisan Parasites for years
Candice Bergen, the sour & dour temporary ‘Leader’ the latest

We ‘ain’t seen nothing yet’ from Poilievre.. just a toxic taste
He won’t even be living in Carleton Federal Riding in 2025
I expect a crafty campaign is planned to gain re-election there
The majority of eligible voters in the Riding Did Not vote for him
& predictably split the vote Liberal/NDP

It’s notable that a Ford MPP is the Provincial Public Servant
She ran again & was re-elected.. forgot to mention though
The Law Society Of Ontario has now suspended her

At the End of the Day.. on Carleton hangs Poilivre’s ‘future’
and that of the Conservative Party of Canada as well
Imagine a ‘Leader’ who cannot become PM ?
Would they even bother if they also lost the Federal Election
to assist him being ‘Elected’ via a By-Election somewhere ?

Perhaps only in Alberta eh !

What turn will they take, sal, when they lose again?

The saddest commentary on our "democracy" or method of governance may be that the only requirement to being a leading politician has nothing to do with competence or qualifications or intelligence or vision or welfare of people or the country, the only requirement is getting votes and winning an election.
Nice if the vote has a citizen name attached to it but really no longer a requirement.

The only measure of success these days is whether you win or lose, lungta.

Just think of the disaster that could occur Owen if Poilievre and Danielle Smith were in complete control of Canada and Alberta. It was bad enough with Curly, Larry and Moe (Kenny, Moe and Ford). RG

From Alberta something ugly from this way comes, RG

'Sanctuary City' NYC Mayor Eric Adams (D) has declared a state of emergency after the 'sanctuary city' was unprepared to provide sanctuary to migrants arriving from Texas and elsewhere.

On Friday, Adams said that since April, at least 17,000 asylum seekers have been bused to NYC from other parts of the country - and claimed that many of the migrants didn't realize they would end up in the Big Apple, Axios reports.

New York City officials have previously said they were not prepared to handle the influx of migrants. Adams requested federal assistance in August.

He said the city has received an average of five to six buses per day since September, with at least nine arriving on Thursday. -Axios

"This is a humanitarian crisis that started with violence and instability in South America, and it is being accelerated by American political dynamics," said Adams, adding "Thousands of asylum seekers have been bussed into New York City and simply dropped off without notice, coordination or care, and more are arriving everyday."

"The majority are adults, who cannot legally work in this country. Many are families with school-age children. Some are in desperate need of serious medical care," Adams continued. "We're going to do what we have to do in New York, but we do need help to deal with this crisis that we're facing."

Sounds like we'll have to increase the Carbon Tax.

As Poilievre gets angrier, Brian, he gets loonier.

If Pierre and his party were "unaware" for 4 years they had misogenistic material on their youtube, then he hardly qualifies to be P.M. He just isn't aware enough, or smart enough, or observant enough, etc. Its obvious then he isn't able to hire appropriate staff, so lets not let him hire anyone for the federal government.

As the saying goes, you are known by the company you keep. I've seen who he "hangs" with and it does not bode well should he become P.M.

Oh, well B.C. could leave and join Washington State, Oregon, and California and form a new country. Different people have been talking about it for decades out here. the B.C. government accepted an invite to meet with the Govenors of the states and B.C. has joined in financing a committee which will look at a railway which would run from B.C. to California and California is the 5th largest economy in the world.

I love my country and would never want it to change with a P.P. Smith leadership, but if that happened, and those 3 states which are not like the rest of the U.S.A. politically, who knows.
I'd rather be with a state which protects a woman's right to control her own body than to a country which doesn't.

As you note, e.a.f, we should pay attention to the company our politicians keep.