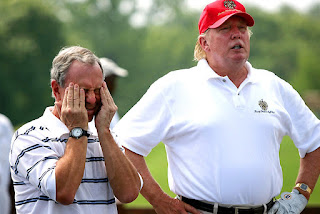 It looks like Michael Bloomberg will enter the presidential race. Whether or not that will be good for the Democratic Party is an open question But Maureen Dowd writes, things could certainly get interesting:

Donald Trump has turned the White House — and America — into his crib, wailing and spitting up and throwing things. Republican lawmakers have been consigned to diaper duty. So maybe it’s fitting for Mrs. Doubtfire to pop in to lay down the law in this federally funded nursery.

Still, it would be undeniably entertaining to have a stinging face-off between a couple of rich, caustic New Yorkers who have skyscrapers known by their names blocks apart.

One is a real deal maker who cares about public policy and one is a fake deal maker who only cares about himself. One self-made billionaire who’s good at business would mock the so-called billionaire and bankruptcy king who needed a constant cash flow from daddy Fred. One is in the media business and one denounces the press as degenerates, lowlifes and enemies of the people. One is a genuine philanthropist and one was just ordered to pay $2 million in damages after admitting money raised by his charitable foundation was used in part for his presidential bid and to settle business debts. One is totally controlling and one is totally out of control. One rants about trans fats and one gorges on them.

Both of these salesmen can be charming or thin-skinned and arrogant. Both have politically fluid histories. Both have their feet to thank for keeping them out of Vietnam; Bloomberg had flat feet and Trump (supposedly) had bone spurs. Both have been accused of having a sexist streak, even though they supported Hillary Clinton at times and have voiced appreciation for smart women. And both men have talked openly about their love of beautiful women.

As The Times’s Michael Grynbaum tweeted, slyly summing up the Gotham derby: “How many New York City personalities can one country handle?”


Good question. There's such a thing as too much New York.

Image: The New York Times
Posted by Owen Gray at 9:12 am

Email ThisBlogThis!Share to TwitterShare to FacebookShare to Pinterest
Labels: Bloomberg Enters The Race

I was watching a report on American news last night, Owen. Some people are not thrilled by the fact that he may skip the early primaries and only run in the "Super Tuesday" ones. If Bloomberg wants to run, he should run in all of the primaries, in many people's view.

"What this country needs is another elderly billionaire Republican president," said no Democratic voter ever. Bloomberg's vanity run is a total waste of his money and everyone's time.

From what I read, Lorne, Bloomberg plans to use his money to blanket the airwaves. The Americans don't need another billionaire -- or faux billionaire -- running for president.

Boiled down to its bare bones, Cap, the argument seems to be that money buys power -- voters be damned.

Let him debate Elizabeth Warren on the regulation of banking and financial markets. Then, assuming that its citizens bear at least a smattering of historical memory or understanding of cause-and-effect, America can judge who the real extremists are. But of course, I realize that's hoping for too much.

It's "Medicare for all! Medicare for all!" Better that Warren would have left out the labelling and simply said something like, "​I am going to take care of everybody. I don't care if it costs me votes or not. ​The government's gonna pay for it," as Trump did in 2016. But she's a real lefty and an extremist and maybe even a socialist, you know. That's what I've been told. Only somebody committed to real capitalism can get it done. I've been told that as well.

When Americans hear "socialist," they here "communist," John. They're not given to making careful distinctions.

Tom Steyer has already blown $45 million or more to get all the way to what, 2-3% in the polls at best? Money and flooding the airwaves helps, but it won’t create supporters where none exist. Bloomberg doesn’t stand a chance for the same reason Steyer is burning his cash, there really isn’t any constituency in the Democratic Party these days for a “moderate" billionaire that will coddle Wall Street and other billionaires. The best he can hope for is to take support away from “moderate” Biden, and probably not much at that. (And really, if you’re going to run because you’re scared of Warren, why not just support the guy already leading her in the polls, unless you suspect he’s damaged goods himself?)

Also, the strategy of skipping the early states because he’s too late to get going there is such a great strategy. Just ask eventual Republican nominee Giuliani. All this really shows is that if you’re a billionaire with your own media company, you can get people talking about you. Getting them to vote for you in a party that has made income inequality one of their major issues is another matter.

If Bloomberg is truly serious, he made a good decision to come in late. He avoided all the fighting with trump and he didn't have to bother with the debates and the game show style being sent home.

He may be running to avoid Warren or Sanders winning. He be running to give Trump something to talk about. What ever he is up to, it will be interesting. On he other hand, there is another billionaire running for the Democratic nomination also. I do believe Bloomberg was just plain clever to avoid all the stuff the others went through and just comes in late. it may work for him or perhaps not, but I'd sure like to know why he is really running........he's up to something.

Your analysis is solid, BJ. Like you, I can't see a pathway for Bloomberg's rise to the presidency.