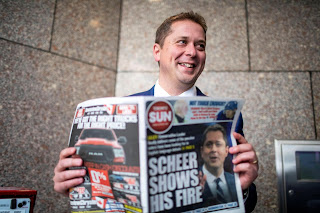 Andrew Scheer's leadership of the Conservative Party, Tom Walkom writes, is doomed  -- because he cannot win in Ontario:

The Conservatives did gain three more Ontario seats. However, their share of the popular vote in Ontario dropped by two percentage points.

More importantly, they were unable to unseat Liberal incumbents in huge swaths of the so-called 905 belt outside Toronto. In Toronto itself, the Conservatives were completely shut out.

The main reason is that Scheer failed to connect with Red Tories.

Red Tories represent the dominant form of Conservatism in Ontario. They are typically moderate. They are amenable to using government to achieve useful social ends. They generally value co-operation.

Premier Doug Ford has belatedly come to understand the importance of the Red Tory vote in Ontario. That’s why his Progressive Conservative government is so busy backing away — rhetorically at least — from its initial hard-line positions.

Ontario’s ever so practical Red Tories know from experience that refinery shutdowns and turmoil in the Middle East have more effect on gasoline prices than Ottawa’s carbon tax.

It emphasizes balance — in this case, the balance between economic and environmental needs. It suggests action without getting bogged down in the details of what this action will accomplish. It allows people to think they are doing something about the climate problem without requiring them to bear a hefty cost. And it is based not on government fiat but on market pricing.

Image: Reuters
Posted by Owen Gray at 9:55 am

Email ThisBlogThis!Share to TwitterShare to FacebookShare to Pinterest
Labels: Scheer And The Conservative Party

Since Harper's hostile takeover of the PCs, it was long suspected that the Cons were nothing but rebranded Reformers. Scheer's agenda proved that. He won massively in Alberta and Saskatchewan, and got creamed where it counts, in Ontario and Quebec.

The 338canada analysis summed it up this way:

Together Quebec and Ontario hold 199 federal electoral districts and the Conservatives lost ground in 139 of them (70 percent) compared to 2015. That’s the election right there for the Conservatives. Losing ground in 70 percent of districts in the two most populous provinces in the country is a sure path to defeat.

Reform never did well in Ontario and Quebec, and remained a Western Canadian rump party. The Prairie provinces are desperate to sell their oil and gas and will believe any nonsense about the Libs standing in their way. Residents of Ontario and Quebec, home to the banks, know that low world oil prices and the ever-decreasing cost of renewables are turning tar sands operations into stranded assets. We need a plan to retrain roughnecks, not more pipelines.

When I think about what's happening in Alberta, Cap, I think of the asbestos industry in Quebec. We lived in asbestos country. The mines have long since shut down. That's why we live in Ontario. We were forced to make large changes -- and that's not easy.

.. Canadians need to recognize, that The Conservative Party of Canada is targeted by the Pro-Life and Evangelical movement and organizations. Full Stop.. Those factions are committed to ensuring every possible 'winnable' riding's campaign committee is overwhelmed, simply by flooding those ridings with Party Memberships. Thus the ridings' Party candidates are Pro-Life and/or Evangelical. That is their intention and goal.

The process of using overwhelming Party memberships to gain control works .. which is exemplified in how Patrick Brown 'won' the leadership of The Ontario Conservatives, and Jagmeet Singh won the 'Leadership' of the federal NDP. I am not neccessarily saying either is a Pro-Life advocate or evangelical.. but that is how they 'won' a 'leadership' competition. How did Andrew Scheer 'win' at the last moment over Bernier is a question for the ages.. Why was Michael Chong the first candidate eliminated ? How were there more votes than the number of actual memberships ? Hanky Panky rules the day !! And be sure Party rules dictate all ballots burned the day after, or all electronic voting data triple wiped the day after..

And as we know via Doug Ford, once Patrick Brown was toast.. he just flowed into the void.. We could say the same for Jason Kenney.. there's nothing like political opportunism eh.. and timing is huge in the septic tank of Party Politics and extreme partisanship

Your parallel is apt Owen, but Quebecers never made it worse for themselves by putting all their political eggs in one basket. As even Lucien Bouchard recently conceded, it's better to have three Quebec cabinet ministers than 40 Quebec opposition MPs. But voters in the Prairie provinces just keep voting Con even after the Libs spent billions on the TM pipeline to support them. There's no cure for stupid.

The Reform/Alliance/Conservative movement has been disastrous for our country. With its veiled Christian conservative underpinnings it exhibited an obvious social conservatism. It was never about the needs of the society at large. I remember when Harper's then BFF, Tom Flanagan, took a speaking gig on Saltspring Island and told his paying audience that Harper eschewed even the idea of 'vision' and instead chose to operate by stealth, incrementally, so that the public would be lulled into complacency while he sought to emulate terminal-stage Republicanism.

They have nothing to offer the country, particularly in this climate-emergency. That's not to say Trudeau is much better.

Quebecers also had a more diverse economy than Alberta's economy, Cap. Albertans are caught in a classic resource trap.