Democracy Can't Be Taken For Granted 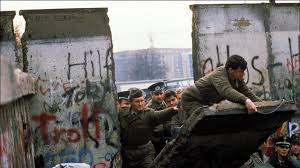 We are approaching the thirtieth anniversary of the fall of the Berlin Wall. The conventional wisdom then was that freedom was on the march. Max Boot writes:

I was a student spending part of my junior year abroad at the London School of Economics, and I was profoundly affected by the collapse of this symbol of tyranny. “Like Westerners everywhere,” I wrote a few weeks later in the University of California at Berkeley student newspaper, the Daily Californian, “I was exhilarated by the West’s apparent victory in the Cold War, as well as by the opportunity to shape a Europe of free markets and free elections.”


Boot's exhilaration has long since dissipated. Since the fall of the wall, freedom has not been on the march:

The world remains much better off than it was during the dark days of the Cold War, but freedom is much more embattled today than I expected in 1989. China, home to nearly a fifth of humanity, has not progressed toward democracy; the suppression of the Tiananmen Square protests a few months before the fall of the wall foretold its future. Russia flirted with democracy but reverted to autocracy. New democracies have emerged, but a number of them — e.g., Poland, Hungary, Serbia, the Philippines, Nicaragua — have been backsliding. Authoritarian populists are rising. Even India, the world’s largest democracy, is seeing minority rights threatened by Hindu nationalists. Freedom House reports 13 consecutive years in decline in political rights and civil liberties around the world.


Most worrisome of all, in the United States, freedom is in retreat:

Who could have imagined in 1989 that the United States would someday be governed by a president who refers to his critics as “human scum” and “the enemy of the people,” who obstructs justice, ignores Congress, assaults the media, invites foreign election interference, engages in blatant corruption, locks children in cages, praises white supremacists and kowtows to dictators? Yet here we are — and the latest poll of battleground states suggests that President Trump could easily win reelection despite (or because of?) his assault on democratic norms.


Age tends to temper youthful idealism. But this is more than old age's re-evaluation of youth:

Freedom will not prevail because of historical forces; it will only win, if it does, because of historical actors. In other words, us. Those like me who came of age around 1989 used to take democracy for granted. Now I realize we have to fight for our freedom, just as our ancestors did. And there is no guarantee that the perpetual struggle against oppression will have a happy outcome.


Democracy should never be taken for granted.

Email ThisBlogThis!Share to TwitterShare to FacebookShare to Pinterest
Labels: After The Fall Of The Wall

As you are aware Owen, I started writing over at 'Democracy Under Fire' of my concerns about what I perceived to be a decline of our democracy during the Harper years, the Trump years now seem to be bringing out more and more right wing 'authoritarian populists'. Unfortunately that autocratic style of governance appears to be infecting several of our own leaders here north of the border, we must indeed constantly stand up to those who would diminish the democratic norms.

Autocrats have no respect for borders, rural. But they do take inspiration from the rise of intolerance.

Democaracy is not to be taken for granted. this I have known since a child, growing up in the 1950. I was aware of what had happened in Europe and our Mother taught us it could always happen again. As your post outlines what is happening in the U.S.A. I don't think we envisioned it happening there. but we ought to have. For centuries vast number of people were denied their human rights and their right to participate in democratic "rituals" such as voting. what is happening in the U.S.A. is just an expansion of what was once used against people of colour, mostly black. Now these practises extend to people of all colours, as the financial elite expanding their "territory" or rather their claim to more. During all of this decline in Democracy, some have acquired much more wealth. Some like the big tech companies know a revolution could happen so they're throwing a few crumbs around with a billion here or there for affordable housing in the California.

The politics of division has always been there, the attempt to turn half the working class on the other half. For a few decades, the working class's wealth increased, but then it began a turn down, with the advent of Reagan and the 'ratfuckers' such as Lee Atwater, Roger Stone, etc.

Intolerance is practised so autocrats can expand their base and in North American this goes back all the way to the days of slavery and Reconstruction. the corporations want more and don't care how they get it. autocrats like Putin, want more and he has a tool to attain it, trump. The vilification of Mexicans is simply another attempt to divide the working class. Most in the middle class have forgotten that they are actually also working class. If you are not part of the 250 financial elites in the U.S.A., you are either their tool or working class. It is all the same, With each act trump inflicts upon the U.S.A. people become more and more numbed. This will not end well. On the other hand, the people of Hong Kong are surely working hard to create a better democracy and willing to put their lives on the line for it.

The people of Hong Kong are reminding all of us, e.a.f, that democracy requires great courage. It dies when cowardice is the order of the day.


Blood poisoning often results from an open wound that allows bacteria to enter the body. Sepsis ensues and, unless treated quickly and aggressively, death usually results.

Our societies today are a gaping, open wound. We are torn apart and reform as rival camps - suspicious, often deeply hostile to each other. Tribalism, Lord of the Flies sort of thing.

When you have a nation whose people are pitted against each other, bacteria like Trump can infect the wound and inflict grave, lasting and sometimes lethal damage.

America is riven. Its government is detached from its people. Political capture begat regulatory capture and now, with Trump at the helm, even judicial capture is in place. The 2014 Princeton study by Gilens and Page documents how America's 'bought and paid for' Congress routinely favours special interests when they clash with the public interests. Professors Gilens and Page concluded there was no doubt that the US had ceased to be a democracy and had, instead, become an oligarchy.

Political capture meant that regulated industries could stack regulating boards and bodies with their own representatives, giving them direct control over some vital governmental powers. What started with establishing influence progressed into control of some powerful bodies.

Throwing Trump out of office is not going to remedy these ills. They existed before he decided to seek the Republican nomination. It's no surprise that the private interest influence and control has consolidated under Trump's administration.

The public is acrimoniously divided to the point where it is sometimes too distracted to object. Trump's people hear his harangues against the "deep state" when the real alternative government is right before their eyes in the capture of political and regulatory power.

I once thought that those such as Hedges who advocated for something seismic but short of outright revolution were extremists but, having stared this beast in the eye since the Bush/Cheney era, I can't think of anything else that offers real hope of democratic restoration. Thomas Jefferson was right.

Jefferson believed that, occasionally, a little blood letting was required. I shudder to think what that will mean in our time, Mound.

Has ALEC got down to the serious part of going to work on the US Constitution, or have they put the project on a temporary hold? Maybe they won't need to after all.

Back in the 80's as I watched what transnational investment interests and their proxies were willing to do to promote freedom and liberty in Central America, I often wondered what outcomes would have come about in Europe if they'd had automatic small arms in the Thirty Years' War. In any case, I think America will provide some answers to that before anybody else is likely to.

The answers will probably leave everyone in a state of depression, John. And it doesn't have to end that way.