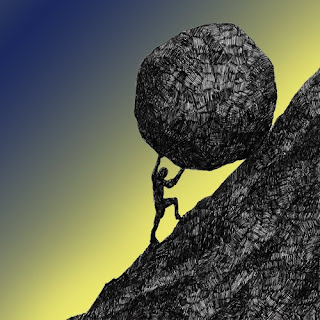 UBC economist William Rees argues that we are -- in George Bush Sr.'s memorable phrase -- "in deep do do:"

We can probably agree that techno-industrial societies are utterly dependent on abundant cheap energy just to maintain themselves — and even more energy to grow. The simple fact is that 84 per cent of the world’s primary energy today is derived from fossil fuels.

It should be no surprise, then, that carbon dioxide from burning fossil fuels is the greatest metabolic waste by weight produced by industrial economies. Climate change is a waste management problem!

Cheap fossil energy enabled the world to urbanize, and this process is continuing. The UN expects the urban population to rise to 6.7 billion — 68 per cent of humanity — by 2050. There will be 43 mega-cities with more than 10 million inhabitants each as early as 2030, mostly in China and other Asian countries.

By 2018, the combustion of fossil fuel alone was pumping 37.1 billion tonnes of carbon dioxide into the atmosphere. Add to this the net carbon emissions from land clearing (soil oxidation) and more vigorous forest fires, and we can see why atmospheric carbon dioxide concentrations reached an all-time high of 415 parts per million in early 2019.* This is 48 per cent above pre-industrial levels and concentrations are rising exponentially.


We'd like to think that green energy will save the day. But Rees claims that's a pipe dream:

There is plenty of superficial support for the notion that green tech is our saviour. We are told repeatedly that the costs of providing renewable energy have fallen so low that it will soon be practically free. Australian professors Andrew Blakers and Matthew Stocks say “Solar photovoltaic and wind power are rapidly getting cheaper and more abundant — so much so that they are on track to entirely supplant fossil fuels worldwide within two decades.” Luckily, the transition won’t even take up much space: UC Berkeley professor Mehran Moalem argues that “an area of the Earth 335 kilometres by 335 kilometres with solar panels... will provide more than 17.4 TW power.... That means 1.2 per cent of the Sahara desert is sufficient to cover all of the energy needs of the world in solar energy.” (Someone should remind Prof. Moalem that, even if such an engineering feat were possible, a single sandstorm would bury the world’s entire energy supply.)

The growth in demand exceeds additions to supply from renewables, the latter cannot displace fossil fuels even in electricity generation — and remember, electricity is still less than 20 per cent of total energy consumption, with the rest being supplied mostly by fossil fuels.

Nor is any green transition likely to be cheap. The cost of land is substantial and, while the price of solar panels and wind turbines have declined dramatically, this is independent of the high costs associated with transmission, grid stabilization and systems maintenance. Consistently reliable wind and solar electricity requires integrating these sources into the grid using battery or pumped hydro storage, back-up generation sources (e.g., gas turbines, cruise-ship scale internal combustion engines, etc.) and meeting other challenges that make it more expensive.

Also problematic is the fact that wind/solar energy is not really renewable. In practice, the life expectancy of a wind turbine may be less than 15 years. Solar panels may last a few years longer but with declining efficiency, so both turbines and panels have to be replaced regularly at great financial, energy and environmental cost. Consider that building a typical wind turbine requires 817 energy-intensive tonnes of steel, 2,270 tonnes of concrete and 41 tonnes of non-recyclable plastic. Solar power also requires large quantities of cement, steel and glass as well as various rare earth metals.


We are, Rees argues, like Sisyphus -- rolling that stone up the hill, only to see it roll down again.

These are not pleasant thoughts for a Sunday morning. But I offer them for your consideration.

It appears that we have gotten into a bind that no technological developments can pull us out of, Owen. So much for those counting on a deus ex machina, eh?

This is all to maintain a consumerist lifestyle that is sold to us by a profit-driven capitalist system.

I am sincerely proposing that we transition to a leisure society. We spend so much time making, selling, buying, discarding so much that we don't need (and wouldn't even want were it not for the brainwashing campaign known as marketing-advertising).

One place where leisure isn't needed is in farming. Cities are full of hands that could go into backyard and community gardens. Paved streets could (some of them anyway) be transformed into fields and orchards.

I have for a long time had thoughts about first steps that could be taken towards such a society, but there's been no audience to hear it.

It was just days ago that the International Energy Agency's latest forecast was released. It heralded a massive expansion of renewable energy but predicted demand will grow even faster creating a steady increase in demand for fossil fuels.

Rather than being slashed, the IEA sees GHG emissions from fossil fuels growing by 20 per cent by 2040.

We know what that means. No point dwelling on it.

So, if we're not going to break our fossil fuel addiction, what then? Humanity has three mortal addictions. Cheap fossil energy is only one. It is compounded by our relentless growth in the global population. Those two are then compounded by exponential growth in GDP - extraction/production/consumption and waste.

All three of those rise to the level of existential threats. One or more of them will do us in, at least as we now live. The question is reduced to which one - or perhaps two - of them has the shortest fuse. We're burning more climate-bending hydrocarbons than the environment can bear. That stops at some point. We've burdened the biosphere with with our sheer numbers at least twice its carrying capacity. Whole lotta people going to die. And we're using more resources than the planet can sustainably provide - by a factor of 1.75 times and that's growing.

If you listen you can hear all three of those fuses crackling, hissing and popping. Nobody is much interested in putting them out - any of them.

We had a chance to do this on our own terms but we weren't up for the heavy lifting.

Do you realize it was way back in 1975 that Springsteen penned "Born to Run," his ode to the "runaway American dream."

The myths have been proven wrong, Lorne. This is a catastrophe of our own making.

The trouble with dreaming, Mound, is the requirement that you remain asleep.

The problem with a consumer society, thwap, is that it piles up waste. We have reached the point where we are drowning in our own waste. This can't end well.