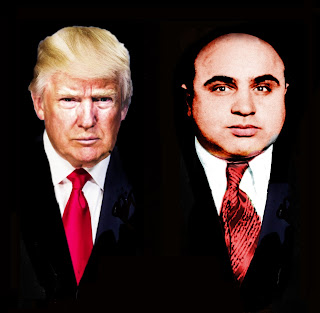 As far as we know, Trump has never gone full-Capone and actually ordered one of his capos to literally take out any of his business or political opponents. But lest we forget, during the 2016 campaign, Trump boasted he could “stand in the middle of 5th Avenue and shoot somebody” and not “lose any voters.”

And lest we think Trump was simply waxing hyperbolic, one of the president’s private attorneys told a three-judge panel of the 2nd Circuit Court of Appeals in October that Trump could not be investigated or prosecuted until he leaves office, even if he really did shoot someone on 5th Avenue. The astounding assertion was advanced in support of Trump’s attempt to prevent Manhattan District Attorney Cyrus Vance from obtaining Trump’s income tax returns. The circuit court ruled against Trump on Nov. 4.


And it's taxes where Trump's world and Capone's world really come together:

When Capone was finally held to account, it wasn’t for masterminding the St. Valentine’s Day Massacre of 1929, in which seven of his gangland Chicago rivals were killed, or for the violent extortion and bootlegging empire he had built. The Feds never got Capone for his most heinous offenses. Instead, Capone was arrested, tried, convicted and sent to prison in 1931 for the mundane white-collar crime of income tax evasion.

Still, Capone’s conviction brought his career as a mafioso to a close. After serving his time in custody, Capone was paroled in 1939, suffering from syphilis and early-onset dementia. He died in Florida eight years later, with what his doctor described as the mentality of a 12-year-old child.

To be sure, it is highly doubtful that Senate Republicans will follow the example of Capone’s jury and vote to convict Trump and remove him from office in an impeachment trial conducted in the upper chamber. But if the impeachment case against the president is skillfully prosecuted in the Senate, it will severely damage Trump’s reelection prospects and hasten the demise of his political career, much as the tax-evasion prosecution of Capone brought an end to the career of the most notorious mobster in American history.


It's been clear for some time that Trump has run his business and the United States like a mob boss.

Image: Medium.com
Posted by Owen Gray at 9:27 am

Email ThisBlogThis!Share to TwitterShare to FacebookShare to Pinterest
Labels: Trump and Capone

Americans do seem to like their renegades, Owen. The problem comes when they elevate them to positions of power.

At least Capone has one up on trump, Capone died with the mentality of a 12 yr old. dtrump has been operating like a toddler in the middle of a tantrum.

I'd suggest Capone was the more honest of the two men, in my opinion.

That's a valid point. e.a.f. Trump has been a child his whole life. It took Capone a while to regress.