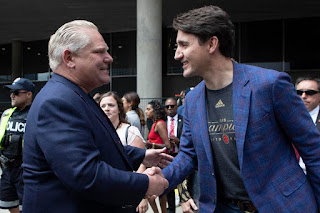 A month is a long time in politics. And, Susan Delacout writes, the past month has made a difference in Ontario's politics:

Trudeau and Ford will be having what’s widely expected to be a cordial meeting in Ottawa, to talk over what they can do together to help the province.

Officials for the prime minister were saying on Thursday evening that they were cautiously optimistic about both the tone and potential for progress at the meeting, especially on issues related to infrastructure and transit.

For his part, Ford doesn’t seem to be holding any post-campaign grudges.

“Politics is politics and I have a pretty thick skin and I understand what he was doing,” the premier said when asked about how he’ll work with a leader who cast him as an enemy for 40 days running. “When I had a conversation with him, I told him politics are done and let’s roll up our sleeves and start working together.”


And there is no talk of alienation:

All the talk of Western alienation in the wake of the federal election has almost erased the memories of the running antagonism between Ford and Trudeau during the campaign. It raised very real questions about how Ottawa and Ontario could possibly work together.

But note, as Ford surely has, that no one is talking about “Ontario alienation” in the aftermath of the election and the national fissures it has exposed. More than half of Trudeau’s new cabinet members are from Ontario, and the Toronto contingent is placed in some of the most senior roles: Chrystia Freeland as deputy prime minister, Bill Morneau in finance, Bill Blair at public safety.

Trudeau is reportedly going to urge Ford to cultivate deeper relationships with all of these ministers, especially Freeland, who is also going to be serving as minister of intergovernmental affairs.

Indeed, the Freeland-Ford relationship may be the one to watch in the coming months.


Freeland proved during trade negotiations in Washington that she knows how to deal with difficult people. Politics should not be about obliterating your opponents. It should be about creating win-win scenarios. Who knows? Perhaps such a scenario can happen in Ontario.

Email ThisBlogThis!Share to TwitterShare to FacebookShare to Pinterest
Labels: Trudeau And Ford

Sounds like Bay Street told Ford to drop the junior varsity GOP act and work with Trudeau on getting PPP infrastructure funding and other goodies.

Ford was put in the broom closet by the Cons during the election, something, I'm sure he wasnt keen on. Trudeau is most likely being nicer to him than Scheer and Kenny. In my opinion, Scheer and Kenny's religious beliefs spill over into the political, while Ford, using the religious right to attain office, himself is more secular . there fore it will be easier to do business with him.

By now the world knows Freeland isn't a push over. Kenny and scheer may not have gotten the memo and have problems dealing with her. Freeland will most likely have a chat with Kenny which will leave him stunned, thinking he can get away with his wexit routine. he might do well to remember Freeland was getting on a plane to leave Europe when negotiations ground to a halt because one politicians wouldn't buy in. Kenny could find he has no power. if the other premiers buy into programs and he doesn't Alberta may find they've been left out in the cold or Ms. Freeland simply does a work around. Other premiers won't be happy if Kenny holds up programs for the whole country and the voters of Alberta won't be happy if they miss out on programs the rest of Canada has.

The majority of voters do not live in Alberta and Sask. Alberta never did send a lot of Liberal M.P.s to Ottawa so who cares what Kenny wants. Alberta may have sent a lot of money to Ottawa, but they made a lot of money and what they made, a lot of it was pissed away by the Conservatives in Alberta.

I suspect that Kenney will opt out of things like a national phramacare program, e.a.f. -- until Albertans tell him to get with the program.

I note his attempt to restrict access to some forms of health care failed to pass in the Alberta Leg. The boy is, in my opinion, what I call the christian taliban. in his case,the catholic tabliban. If things are so bad in Alberta, as he alleges, he will truly look like an idiot if attempts to block people from accessing better pharma care. Although B.C. has a government plan of sorts, I'm not aware Alberta does.

My guess, e.a.f, is that Kenney will claim Alberta can't afford pharmacare.