He Used To Be A Fed 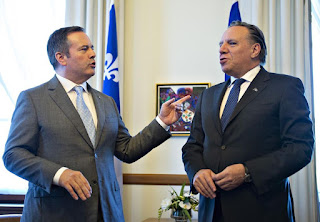 Jason Kenney has been railing against the federal government's equalization program. He claims that Alberta has been short changed and that Quebec is a provincial welfare bum. But he neglects a few facts. Alan Freeman writes:

As Trevor Tombe, a University of Calgary economist points out, even with the fall in oil revenues, Alberta remains the richest province in the country by far. “Quebec gets equalization because they’re poorer across a number of metrics.” And that’s what equalization is there for, to try and equalize the ability of provinces to provide services to their population depending on their fiscal capacity.

Quebec’s finances are healthier because its economy has strengthened, it’s got its spending under control and taxes are much higher than in Alberta. But to deal with its budget crisis, Kenney actually cut corporate taxes, digging the province deeper into the hole. The idea that Albertans should actually pay for the services they receive remains an alien idea to the United Conservative Party.

In fact, Tombe says that if Alberta imposed Quebec tax rates, the province would have an extra $21-billion in revenues and a surplus of $14-billion, rather an $8.7-billion deficit.

“A province’s budget balance has nothing to do with equalization,” says Tombe.


So, rather than rejigging the system, what should be done? After all, betting the farm on the oil sands has hurt Albertans. And there's a lot of hurt. Freeman suggests one time payments to help Albertans through this mess, while they -- hopefully -- rejig their economy and their tax system:

There may be small changes to equalization, but there’s no way the Trudeau government is going to scrap the program or make huge cuts that would undermine fiscal planning in the five recipient provinces. What’s more likely is that Ottawa tries to find a way to transfer some cash to Alberta and Saskatchewan by giving them one-off grants to compensate for their tough times.


Will that satisfy Kenney? Probably not. Bashing the feds has got him a long way. And Albertans seem to forget that he used to be a fed -- who, back in 2009, helped establish the present equalization formula.

Email ThisBlogThis!Share to TwitterShare to FacebookShare to Pinterest
Labels: Kenney's War On Equalization

Jim Prentice, the last honest Alberta premier since Peter Lougheed, spoke openly of the need to raise revenue through taxation. Notley sent him packing and carried on with the "Alberta Advantage" nonsense.

British Columbia looks on Albertans as saps. We know resource markets rise and fall. Our forestry industry lives with that. Our mining companies, likewise. That's the nature of resource economies. You simply must take the good with the bad and use the good years to fill your treasury to withstand the bad.

"Dear God, please give us another oil boom and, this time, we promise we won't piss it all away." How many times can you recycle that bumper sticker? They treat that as wry humour even as their profligacy evaporates cyclical wealth and leaves the beach hard and bare when the tide ebbs. It's childlike behaviour.

And then, when bust comes, they do what children do. They ball their fists, they stamp their feet and they throw an ungodly tantrum, blaming everyone else but themselves.

Kenney - federal, provincial? Nah, that's not how he rolls. He churns. Whether he's in Edmonton or Ottawa is irrelevant. He's a churner. His shtick depends on a steady supply of grievance, more often than not manufactured at least in part.

There are progressive Albertans but it's never their voice we hear. Our ears are assailed by the Redfords and the Notleys, the Kleins and the Stelmachs and, now, Kenney.

There used to be an old adage that you saved for a rainy day, Mound. Kenney tries to blame others for the rain.

.. I try not to blame Alberta or Albertans.. though 'they' did give a creep and his sack of hammers Reformer UCP a majority provincially and a clean sweep federally. I don't know if the Liberals just nodded and walked away.. nor do I really care. I called for 4 bitter years in Alberta after it seems the population collectively stampeded off Head-Smashed In Buffalo Jump.. Critical thinking ?

But despite all the braying from Jason Kenney et al.. here's an example of the underlying rules of the petroleum grift. All Canadians contribute toward Big Energy subsidies, All Canadians are collectively invested in CPP and Old Age Pension.. but here's an classic example of Canadians being deceived, taken advantage off.. and MainMedia is too lazy to dig into this..

This is either sustained astonishing incompetance or outright stupidity

Or a vast fraudulent collusion of Energy Regulators, Governments and primarily foreign controlled Energy Industry. This pertains to daily pipeline leak volumes.. and we certainly are never told what kind of 'oil' spilled.. that's too much to ask.. though for first responders, its their very first question

The other aspect revealed is Remediation (recovery and cleanup, and actual terrain) It seems the data is gathered from behind desks, not in the field.. and the data form seems set on a default setting of 100% recovered & same for restoration. Keep in mind that the terrain may be stagnant or running water, muskeg, diverse First Nation Reserves, boreal, mountain passes, urban areas, coniferous, farmland or grassland etc in Canada. So this is the stacked deck, Kenney can deal from.. 'world class' pollution control and Remediation - my ass. And do they have a special category for coastal marine shoreline or big open water ?

Its a stunning study.. and it deserves and requires an immediate follow up and investigation. The flimsy explain from a bureaucratic regulatory spokeswank re the study findings is ludicrous

Thanks for the link, sal. The deck is, indeed, stacked. There's black goo on lots of different hands.

A more useful link for most.. especially if not on Twitter

It's not just Alberta, sal. We keep refusing to deal with reality. It's not just a data failure. It's a moral failure.