The Kiss Of Death 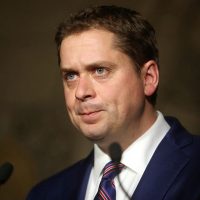 The knives are out for Andrew Scheer. When you lose an election, the people who worked for or with you get snitty. And there's lots of snit coming Scheer's way these days. Robin Urback writes:

Moderate conservatives are publicly urging him to get it together. Social conservatives are publicly urging him to get lost. Conservative Senator Jean-Guy Dagenais recently quit his party’s caucus explicitly because of Mr. Scheer’s views. And now two former Harper advisers have teamed up with the creator of Ontario Proud and Canada Proud to start a non-profit, called Conservative Victory, with the goal of putting pressure on Mr. Scheer to resign ahead of the party’s scheduled leadership review in April. Some friends, eh?

Indeed, despite years in the spotlight and weeks on the campaign trail, Mr. Scheer has managed to communicate very little in terms of a comprehensive world view or personal approach to governance.

On social issues, he’s clumsy and vague. Social conservatives interpret this as him lacking the temerity to see to social change. Progressive conservatives detect a cowardice of a different kind, and many recognize that Mr. Scheer’s waffling is fatal with voters in areas of support the Conservatives desperately need.

During the election, Mr. Scheer’s fiscal policy promises were a mixed bag of lower taxes and tightened government expenses, combined with big spending promises and boutique tax credits. His foreign policy outlook was virtually non-existent (other than a vow to roll back foreign aid) and his guiding principles as a policy maker were, and remain, tough to decipher.


Scheer's going to have a hard time staying in the driver's seat. In politics, losing is the kiss of death.

Most PMs get a couple of terms in office, and Scheer was elected as a place-holder leader. He didn't put his stamp on the party and his election platform consisted of microwaved leftovers from the Harper era.

But after seeing how vulnerable Trudeau was, the party bigwigs figure Scheer blew it and want the leadership for themselves. The old Harper apparatchiks like Teneycke, MacDougall and Byrne are calling for Scheer to leave now.

If Scheer really wants the job, he's going to have to viciously stamp out dissent like Harper did. He'll have to call out his critics, seize control of party policy and tack hard right towards the party base which is strongly influenced by Trump. Instead, he makes a former Lib his deputy leader. I'll be surprised if he holds on until April.

With the possible exception of a Rona Ambrose candidacy, the ranks of those who might replace Scheer are thin, Owen. While Peter MacKay undoubtedly thinks he has the right stuff, many will still remember his terrible betrayal of David Orchard when he broke his promise not to merge the PCs with the Reform Party.

I agree, Cap. I don't see Scheer holding on for long.

It's true that the Conservatives don't have a very deep bench, Lorne. But, despite their lack of talent, I woudn't be surprised if they dump Scheer. They are a congenitally unhappy lot.

The hierarchy of conservatives are quick to pull out the daggers, but they won't take a run at heading the party themselves. Cons have a history of cannibalizing their leaders, and they can keep doing that as far as I'm concerned. RG

The problem the party has, RG, is that it simply is not where the country is.

After ditching Scheer - I'm hoping they bring in Harper as 'interim' leader until the April review.

T.S. Eliot was right,!?. April is the cruelest month.

"I'm hoping they bring in Harper as 'interim' leader..."

Exactly when did Harper ever quit being the actual boss/leader of the CRAP organization? If one thinks realistically about this political group, his stamp and hold are still firmly in place. Anyone else is just keeping the seat warm.

They continue to be a disparate group with varying issues that simply do not reflect the majority of modern Canadians. I know that many blame FPTP as a reason for all this, but unlike the US, we do have more than 2 functioning political parties in Canada and it seems like we are closer to having some version of the different voting systems that have been favoured in the past?

We now have the kind of government which we'd get with proportional represention, Lulymay. Whether we want it or not, that's what we have.