The Evidence Keeps Piling Up 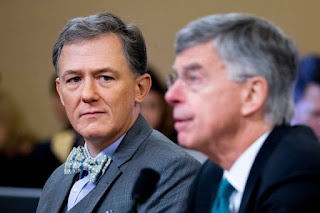 Yesterday was quite a day in Washington. The evidence to support Donald Trump's impeachment keeps piling up. Noah Bookbinder writes in The New York Times:

Mr. Trump used the immense powers of the American presidency to pressure an ally to open investigations that would help him personally. That much is clear just from the call memo of the July 25 conversation between President Trump and President Volodymyr Zelensky of Ukraine.

But today’s testimony made clear that it goes much further. Two respected public servants — Ambassador William Taylor, an experienced diplomat and a decorated Vietnam War veteran, and Deputy Assistant Secretary of State George Kent, the State Department official overseeing European and Eurasian affairs — testified that the president and his personal attorney sought politically motivated investigations by the Ukrainian government into former Vice President Joseph Biden and allegations concerning the 2016 election (the latter references an unfounded conspiracy theory that Ukrainians, not Russians, were behind the hacking of the Democratic National Committee, and the Ukrainians framed the Russian government to make it look like that country was working with Mr. Trump’s presidential campaign).

Pressuring a foreign power to investigate a political rival is, alone, a potentially impeachable offense. But Mr. Trump’s effort to condition needed military and diplomatic aid on investigations helpful to his personal political interests may also constitute bribery as contemplated by the Constitution for the purpose of impeachment. It also likely violates criminal laws, including the federal bribery statute.


And new evidence emerged during the hearing:

The second-hand information argument is especially galling when the WH ordered those with first-hand information to ignore Congressional subpoenas. But I loved the way Dem Rep Peter Welch called the GOP's bluff, saying, “I say to my colleague, I would be glad to have the person who started it all come in and testify. President Trump is welcome to take a seat right there.”

Every defence the Republicans mount is easily knocked down, Cap -- because what Trump did is simply indefensible.

.. I've suggested an obvious reality, quite loudly from Day One.. when Trump won the GOP nomination and Day Two when he won the election and Day Three upon his inauguration. That being, America had elected a scurrilous thieving liar as President.

Further, I predicted that History would not be at all generous or kindly to anyone who enabled or conspired to bring such a failure about. Certainly The Democrats and Hillary Clinton thinking 'it was her turn' was an enabling misconception. Joe Biden has nothing to prove as a Vice President.. but that's all he 'deserves'.. or the Democrats. Does America deserve better ? Good question !

But the history books.. ! You know.. the ones that recount Washington crossing the Potomac, John Paul Jones, John Wilkes Booth, PT 109 and John Kennedy, Sirhan Sirhan.. Nixon.. ya those history books. They have a funny way of sticking around.. and more and more getting written about the same event seems a trend.

So I will repeat.. Both Democrats and Republicans have a choice. Infamy or Fame. Heroism over Cowardice, Home of The Brave or Land of the Corrupt. Whatever they choose, will not not vindicate them or forgive them.. that is for History.. and History can happen today, tomorrow a week from now.. or 50 years from now. She can be a critical, scathing, spare nobody voice and judge, she can also be a gentle gracious admiring will o the wisp.. its all in what you give her, not what you try to hide from her. She's younger sister to Mother Nature, along with The Wind, the Waters.. and always finds her way

We are not going to see the ancient Chinese proverb 'He who rides the tiger dare not dismount'.. but the message is in there.. Its like the Masai legends.. that a young warrior might dash in and seize the lion at the root of its tail such that the warriors would rush in en masse and slay the beast. Up here in Canada eh.. we are watching one of the most stunning historical events in American history. Trump must ride Air Force Two.. the chopper ride to ignomy, infamy.. to be reviled forever.. and all who rode him or with him. Just being aboard to take that shot guarantees a Pulitzer

Its simply astonishing to witness.. ...
its like watching the fearful panicked herd
plunge over Smashed In Buffalo Head cliffs
or the run of the lemmings into the sea

I agree, sal. History will be unforgiving to Trump -- and to all who hitched their future to his damned soul. Damnation -- I've been told -- is one hell of an experience.

It seems to me that Trump has so infected the American political landscape and so debased respect for law that far too many Americans will blithely dismiss the mounting evidence as just another peccadillo on their leader's part. The future continues to look very dark for our neighbours to the south, Owen.

I agree, Lorne. Benjamin Franklin knew that there was no guarantee that the republic would survive. It's not hard to imagine what he would say if he were alive today.

Its not about what they can see right in front of them, its what they don't want to look at. if trump is impeached americans will be forced to accept they made a grave mistake electing him, not just the individual citizens, but all those within the GOP who kept him in his job. there is no reason why people like Lindsay Graham and Moscow mitch could not have stood up to him, beyond they wanted to continue to enjoy their positions and the perks it provides them.

This is not a criminal trial, so "first hand information" doesn't play a big part. In civil trials, what one person says and it is testified to second hand, its enough to win. Back in the day, a friend sued because the CEO of a corporation failed to live up to a verbal agreement. CEO's position was, they never made the promise. However, my friend came home from the meeting and advised us about the agreement, 5 years later while in discovery, the lawyers spoke to me and I was able to recall what my friend was wearing when he came home, what he said, time of year, etc. The CEO and the corporation caved. I wasn't at the meeting, it was simply reported to me, shortly there after.

You're right e.a.f. The rules for impeachment are different than those in a court of law. That said, every defence the Republicans have used has failed. The news that two people overheard Trump on the phone does away wwith the hearsay argument.

This is all about seeing the truth -- and Trump's whole career has been based on selling lies.

It seems to me, Mac, that the there is ample evidence to support that definition.