Learning On The Job 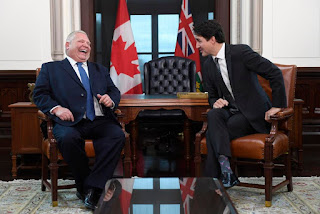 Doug Ford has made a big U Turn. Tom Walkom writes that Ford began his term in office by going to war with Ottawa:

He launched an all-out war against Trudeau’s federal carbon tax. He even brought in a law requiring gas stations to post stickers that blamed Ottawa for the high price of fuel.

He cut back provincial funding for refugee claimants, saying they were the federal government’s responsibility. He chose not to follow federal requirements for infrastructure funding and then blamed Ottawa when the money didn’t flow.

All in all, he had a fine time bashing the federal government. And he seemed to believe that this populist campaign against the powers that be would work for him politically.

In this, he was badly mistaken — just as he was mistaken when he assumed that the scattershot of spending cuts announced in his first budget would earn him political points.

Most Ontarians don’t view the national government as an external entity imposed upon them. They view it as their government. They expect it to reflect Ontario’s interests and are usually proven correct.

That’s why the politics of regional grievance rarely works here.


So, instead of bashing the federal government, he is now saying he can work with Ottawa:

Ford has not dropped his opposition to the federal carbon tax. But he is no longer fixated on it. A few months ago, he was at daggers drawn with Trudeau on virtually every file. Now he says his relations with the prime minister are “great.”


It appears that the lessons of history are beginning to sink in. Only Oliver Mowat -- in the 19th century -- and Mitchell Hepburn -- in the 20th century -- have successfully gone to war with Ottawa:

Like Ontario premiers before him, ranging from Progressive Conservatives John Robarts and Bill Davis to Liberal David Peterson to New Democrat Bob Rae, Ford says national unity is his focus.

He used to style himself as part of the opposition to federal Liberal infamy, aligning himself with Alberta Premier Jason Kenney and Saskatchewan Premier Scott Moe.

Now he is adopting the traditional Ontario role of conciliator — a kind of marriage counsellor devoted to smoothing out differences between disaffected provinces and Ottawa.


Ford appears to be learning on the job.

Image: The Toronto Star
Posted by Owen Gray at 8:41 am

Email ThisBlogThis!Share to TwitterShare to FacebookShare to Pinterest
Labels: Ford and Trudeau

That's what happens when you elect a premier with no relevant experience. When will people learn that success in business rarely translates into political success? You simply can't dictate public policy the way you'd do in business. It doesn't work that way. Now the Ontario government has wasted millions because of Ford's uniformed blunders. We're literally paying this guy to learn on the job!

Exactly, Cap. For too long now, citizens have bought the fallacy that government should be run like a business.

Another thing, Owen - those stickers on the gas pumps. How many of them were printed by Deco?

.. the big problem facing Doug Ford is ignorance. He fancies himself as some wise, clever, informed, modern hip, smart man. This was as obvious as Jason Kenney making the same mistake. Both believe they are smarter then actual educators, healthcare experts, economists, scientists, biologists, climatologists, resource managers, urban planners.. damn but don't they both know everything !

The reality is they both rely on their shallow ideology and the cheering of their psychophants. Its laugable, ludicrous, horrifying. Both are blind to their ignorance.. because they rely on their glibness. Their mouth opens and the smug distorted talking points spew out with practiced ease.. What could go wrong ?

In Ford's case, public opposition has made a difference, sal. It remains to be seen if opposition to Kenney will have the same effect.

I don/t know if he is learning on the job, but what he may have learnt is that those who put him in his job aren't his friends, they are using him to achieve their own political goals. The others could put enough distance between him and their federal campaigns. He got the message. He sees its time to "change sides". the other Cons would step all over him to get what they wanted. The feds offer him a chance to keep his job for at least the next couple of years.

He drank the cool aid and believed budget cuts were the way to go. what he didn't understand was when you cut the budget, you cut the services and all though the citizens of Ontario want lower taxes and all that, they don't want to give anything up. One could say the voters of Ontario learnt a lesson along the way also.

A.: Ford wasn't successful at business either. His father was and he managed to cause the company some real damage. As I recall his sister in law sued him,, because of the money the company lost after his brother died.

It appears that Doug has learned a couple of lessons, e.a.f. There are lots of us who hope he won't have a relapse.