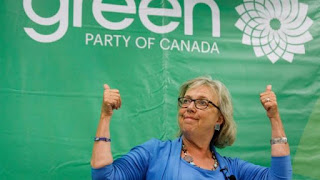 Yesterday, Elizabeth May resigned the leadership of the Green Party. It was not  a hasty decision. Susan Delacourt writes:

It’s a moment that’s been in the works for three years, even if the precise timing was only chosen this past weekend, when May sat down with party officials in an Ottawa hotel boardroom to plot out her exit strategy.

In 2016, May promised her daughter, Cate May-Burton, that she would get succession plans in place. Failing to find anyone interested in replacing her before the most recent election, she vowed again to her daughter that this past campaign would be her last.


May's Party only captured three seats in the election. But climate change is now at the top of the Canadian political agenda. The three seats were far from what May was hoping for. And she has a right to feel her campaign was sabotaged by dirty tricks. However, she's not bitter. And she's as honest as she was when she took on the job:

“I've always kept my word and I’ve never lied, and I think that's important,” she said at the news conference when the talk turned to legacy and how she’ll be remembered.


The Green Party -- under First Past The Post -- may never hold the balance of power. But that doesn't mean they can't drive the agenda.

I had suggestet that Ms May was due to be replaced, her job done and well I thought.. I felt Dr Weaver of the BC provincial branch filled the bill.. but then he was struck with a serious health issue. The jury et al is out re a permanent successor..

.. ah - to those 'thoughts' .. kindly old Don Martin of CTV - Power & Politics of course suggested, rather than a planned stepping down as she said - she was a quitter.. after all.. in his select words to a National TV audience said 'she quit' - he said the same re an elected MP and senior Minister named Ms Wilson-Raybould.. who as I recollect, resigned (seemingly with cause) Rather than being a 'quitter' Ms Wilson Raybould ran again in her home riding as an Independant and was re-elected. I await mr Martin eating his words on National Television and have suggested so via Twitter to his stunningly large horde, fan club and the great man himself. One presumes Ms Jane Philpott too is a 'quitter' in his elevated glass house.

Speaking of Twitter.. haha.. I somehow find salamander country gets periodic 'dispatch' notices from one Ms Amy MacPherson.. If Kevin Donovan and his crew at The Toronto Star are wolves on the hunt, surely Ms MacPherson is an apex predator akin to a polar bear you unfortunately are sharing an ice flow with, albeit not for long. The great white bear has an enormous appetite. Ms MacPherson's dispatch an op-ed on Freethepresscanada.com - 'Political Warfare: The Truth Behind Axing Jody Wilson-Raybould' is a shattering research broadside upon quite a large number of sleepy presumptuous sailers who must nave raided the rum stores. She does tend to dig deep.. very deep, loads the finest red gunpowder.. and arrives as a surprise out of the mist at the witching hour

Her dispatch, Tweeted to me among several twitterati is fascinating and timely.. moreso re Ms May's stepping down. Twitter is inflamed with extreme Liberal partisan sniping. Lazy & pompous MainMedia floated out the rumor that Ms May asked or offered to Ms Wilson-Raybould re the leadership of Federal Greens. It seems the knives are out for her.. Ms MacPherson pulls no punches.. but one can form their own sickening feeling of how this came about and unfolded via her exceptional, Timeline.. buttressed by direct links to validated source docs. She does not fire blanks, its grapeshot dismasting the sails and cannonball barrage below the waterline where the Party planks are worm eaten and rotted

So to the weakass snipes and snouts on Twitter and MainMedia I ask re their source docs, their archived reference.. silence follows.

I believe Ms May will do exactly as she has suggested, represent her riding ably, their dreams, needs and wishes as an elected MP.. Ms Wilson-Raybould has displayed her strong ethics and determination.. against all comers.. Watch for Mrs Philpott.. watch out in fact.. she may be a powerful Green leader given the opportunity.. I hear she has some time on her hands.. and her Christian bonafides blow Andrew Scheer and Jason Kenney out the door. And, she is situated in her home riding in the center of vote rich Ontario !! Michael Harris of course swung my perspective of her. via his excellent article.. If I can become a fan of Mrs Philpott, anyone can.. & I a real hard sell..

I'm in favour of the first past the post system and the Greens are why I continue to hold with that position. both the NDP and Greens have made progress under the system. They, in my opinion, will continue to do so. If you build it they will come, as the line goes. May has built the Green Party and in the last election gained 2 seats for the 4 year term. No small feat. May has made a great contribution to Canadian politics. She may not think she achieved as much as she wanted, but if not for her, there would not be the number of Greens in provincial politics. You have to start somewhere, and now that the Greens have taken the number of seats they have provincially, if they continue to offer some thing the public wants, strides will be made.

Green is now a political force, in other parties. the environment is important to voters. Even if a political party doesn't form government, they can have a great influence on how a country develops. We have to look no further than the NDP and how they managed to attain a couple of their goals, CPP and a national health care. You don't always need to have all the seats, sometimes all you need to do is threaten to take all the seats. the conservatives will eventually also see the writing on the wall and come around. that is all due to the work Ms. May did. Lets hope the party continues under a new leader.

There are a number of able people who could replace Ms. May, sal. As for her reasons for stepping down, I take her at her word. She is one of the few politicians whose word is her bond.

Ms. May has, indeed, done us all great service, e.a.f. We owe her a debt of gratitude.

Ms. May deserves congratulations for a lot of things. One thing we, and she, should not overlook is that she seems to have navigated what seems to me to be an essentially soul destroying profession for virtually every person who becomes caught up in it and retained her original sense of purpose, integrity and basic values. And made progress against very, very difficult odds.

I would love to see her elected as Speaker of the House.

.. a quick followup.. quelle surprise.. Don Martin yesterday announced he is quitting.. that's right, he's a quitter ! He made that bed.. so sleep in it & quitting for more travel, more Florida.. blah blah, proud to have blah blah.. a Senator if Scheer ever gets elected or Peter 'easter island face' McKay.. Bet the farm. We do not suggest he is not a highly capable host.. Power Play on CTV.. (my mistake saying it was Power and Politics) But it gets tainted by his sly nuanced on air patter.. cleverly masking the overt slanted opinionation.. and a certain smugness while broadcasting to a National audience.

I sent him a Tweet, congratulating him on following in the footsteps of 'quitters' as he calls them.. and doing exactly the same thing, which normal people often call 'stepping down' or resigning. I did suggest he had earned my 'faint praise'.. Look for op-eds from this TV host down the road.. or another book.. I plan to look down his backtrail.. out of sheer curiosity.. the period before he was with Calgary Herald etc

A quick other aside.. I note Evan Solomon stuck the pin in the Kenney Pinata.. by asking if it was not ironic that Kenney was ranting about an unfair Equalization equation or algorithm that was designed and implemented by The Harper Government.. that he was a senior minister in.. Kenney is running with the bit in his teeth on the tiny sliver of Albertan Seperatist noyz. Older, overweight white folks, approx 700 plus the organizers & WEXIT leader Peter Downing say, attended a dance bar rally, licensed for mid 400's.. Media is pouring gasoline on this.. Kenney et al smoking carelessly.. by taking every Alberta Advantage of the free media saturation fireworks. BC has just banned fireworks by the way.. !!

I didn't know that Martin had stepped down, sal. Another sign that the ground is shifting under our feet.

Having resigned from the leadership of her party, I would not be surprised if she moved to the speaker's chair, james.