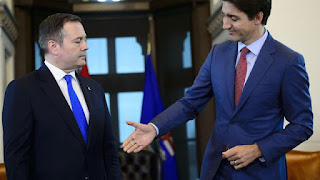 The report makes for grim reading. Scientists reckon that if Earth is to avoid global catastrophe, the temperature increase from pre-industrial times to the end of this century must be held to between 1.5 and 2 C. That in turn requires a dramatic reduction in carbon emissions released by the burning of fossil fuels, such as oil.

But as the UN report points out, global carbon emissions are not declining. They are rising.

Over the last decade, they have risen by 1.5 per cent a year. If this rate keeps up, by the end of the century global temperatures will be 3.2 C higher than they were in pre-industrial times, leading to even more catastrophic floods, wildfires and violent storms.

To avoid this, the report says, global carbon emissions must decline by 7.6 per cent a year for the next 10 years.

This is not an easy target to meet. Under the terms of the 2015 Paris Accord, signatory nations agreed only to set and meet their own carbon reduction targets, most of which were far less rigorous.

The report notes that unless Canada does something quite different, it will fail to meet its self-imposed target of reducing carbon emissions to 30 per cent below 2005 levels by 2030. In fact, says the report, Canada’s emission levels will be 15 per cent above that target.


But, on the prairies, Jason Kenney and Scott Moe are complaining about the equalization formula and insisting that the federal government drop its carbon tax. And  Mr. Trudeau's government is trying to accommodate them. We live in a world of alternate narratives -- and we're missing the alarm bells.

These crises are global but the onset and severity of the impacts are not. Global warming is, by definition, global. Ocean heating and acidification are also global issues. The weight of overpopulation affects the entire planet through our global economy. And so it goes.

Yet the impacts aren't received equally. If they were we would probably be far more collaborative. Because they're not, we aren't. We know that global warming will hammer the equatorial and tropical regions first. It's already occurring but some say it will enter a new dimension in those areas in just a few years. The more temperate regions in which the advanced nations are mainly situated will have a few decades before they're similarly afflicted. In this way, their sense of urgency is not ours. Their necks are stretched on the headsman's block right now.

I heard on CBC this morning a report that Canada must raise carbon taxes above $200 per tonne (GHG) within ten years. Can you imagine a worse political football? I don't think we trust our political leadership enough these days to tolerate such bitter pills.

I heard the same report you did, Mound. The economist who looked at the various mechanisms to deal with the problem said that such a tax would be the best -- and least costly --alternative. It's either pay me now -- or pay me more -- later.

The problem is of course that the price to be paid later may be, almost certainly will be, beyond the worlds population ability to pay. When paying off a debt it is necessary to pay more than the interest being charged I always thought Owen…....

.. we are North Americans..
in terms of climate, realistically no borders
Caribbean to the south - Artic Ocean north
Pacific west - Atlantic east
Lot's in between.. lots n lots

Where and when is 'the awakening' ??
(forget the rapture, prayers n thoughts, elexirs)
get smart, get lean n mean..
Get real, Be real.. Walk In Beauty ..

Lots of us believe that it's acceptable to make the minimum payment on the credit card, Rural. The result is that we merely spin our wheels and never deal with the problem.

We live in hope, sal. But, increasingly, hope is in short supply.

Owen, that look of smarmy arrogance on Kenny's face is very telling. He is more or less saying, Im not going to shake your hand. RG

I would add "self centred" as well, Owen, to Jason Kenney's well known "qualities".

I'm absolutely certain that every night before he goes beddy-bye, he hums to himself: "And I say a little prayer for ME"

It's quite clear that Kenney is ambitious, Lulymay. ME is in there somewhere.