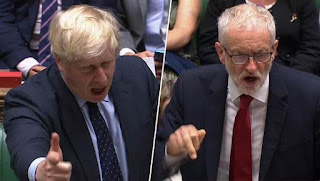 If you think our election was a horror show, Robin Sears writes that you should pay attention to what's happening in Britain these days:

This week the Conservatives were threatened with being banned by Twitter for changing their party’s account name from “Conservative Party” to “FactCheck.org,” to blast out lies. FactCheck is the name of an organization devoted to … well, fact checking, not conservative propaganda.

More seriously, the level of hate speech and death threats circulating in the digital demimonde, especially directed at women and candidates of colour, is stunning. Several women MPs have stood down citing their fears for their families. There are some candidates dumped for anti-Semitism, Islamophobia and racism, many more who should have been.

The two main parties are each led by the most polarizing figures in national politics — even for many in their own base. The two most important challengers — the Scottish Nationalists and the Liberal Democrats — are led by tough and capable women. The existential threat to a united Britain, Brexit, divides families, parties, and communities, but interestingly many voters are not willing to make it the ballot issue.

Massive floods, and the government’s lacklustre response to them; a National Health Service with the worst performance stats in decades; and a deep housing crisis all claim more attention than squabbles over Europe.


And, as in Canada, the First Past The Post System is making things worse:

[This election] is also a showcase of the foolishness of the “first past the post” electoral system in a divided nation with 10 parties (sic 10!) potentially electing MPs. As one British wag put it, “It’s an absolutely brilliant system — if you’re racing horses. Not so much if you’re choosing governments.”


How will it all shake out? Sears reports that:

The Conservatives seem on the way to winning a small majority. It may turn out to be a bittersweet victory, however. Their campaign slogan is “Getting Brexit Done.” Veteran trade negotiators say that the withdrawal process, and new agreements will take a minimum of five to seven years to complete. Setting Boris Johnson up for a very different slogan next time, “Sorry. We couldn’t get it done …”


And the morass Britons have mired themselves in will get deeper.

Email ThisBlogThis!Share to TwitterShare to FacebookShare to Pinterest
Labels: The British Election

When I was last in England, Owen, I was dismayed by the signs of decline that were everywhere. It seems that the British have noticed them too. Surely, a day of reckoning cannot be far off.

The signs are everywhere, not just in Britain, Lorne. We are unraveling.

Britain is nothing but a squalid, miserable, rainy place where foreign criminals go to launder and hide their money. It has little industry left that hasn't been sold to foreigners, yet the Brits are determined to tear up the treaty that allows them to trade tariff-free with the world's largest trading bloc. All to keep the dirty foreigners out who keep bringing money and investments in. In short, the Brits have gone effin' barmy.

It all seems madly self destructive, Cap.

I refuse to refer to Bitumen as 'oil'.. its a synthetic oil when upgraded somewhat
and highly refined diluent is added - approx 1/3rd.. to form a 'slurry'
a la wet concrete or thick porridge
The daily diluent value is a locked in aspect of the daily price of dilbit
as it will be extracted prior to the bitumen being 'coked'

Fantasies such as the late myth, Energy East need to be revealed.
An aged natural gas line headed west, turned around east for dilbit
with destination St John, New Brunswick and export to 'somewhereville'
Irving will not / cannot coke or refine.. its bound for their superport & export

'Tidewater' is Burnaby BC. 1/2 full Afromax supertankers
will depart and scrape over Second Narrows shallows, on to English Bay
into the Salish Sea.. for the riches of Asia ??
As Non-Discounted Benchmark oil.. uh .. no
It will head instead to Washington State and California for refining
and Canada will buy back resulting refined derivatives later..

Alberta round steak does not become Texas tenderloin
by inserting in a pipeline.. or a reefer truck or refrigerator railway car
We do not call roundsteak 'discounted tenderloin' 'ever
Alberta 'beef' yes.. and can we please note 'Alberta beef'
whether 'on the hoof' ie feedlot heifer or steer 'feeders'
shipped east or west for 'finishing'.. or fattened in Alberta
are quoted daily.. and subsequent prices of 'cuts'
ie dozens including hamburger.. flank, sirloin, striploin
fill a range of grading and fluctuating prices

Its dreamland to think such supertankers will traverse the Panama Canal
bound for the US Gulf Coast refineries.. to be discounted further
by higher grade Venezuelan tar sands bitumen, lower in sulphur
and cheaper via a straight shot across the Caribbean, fully loaded
to Superports that can unload and reload simultaneously
and head for Asia, cheaper, far faster.. Hello Jason Kenney ?
Hello Justin Trudeau ? Is anybody in there / out there ? Can you hear us ?

We have our own frauds, failures, liars, deceivers, parasites
Britain is a foundered empire, USA in the same boat.. failing, flailing

My concern is Canada.. my fuel, my belief, is 'fact' driven, not fiction
My tiny guerrila operation is just that .. Email, Twitter, Facebook, commentary
All capable of veracity delivered Iroquois style.. or privateer
midnight, pre-dawn.. sudden broadside rippling out from the mist
head upwind, live to fight again, or double back like a rogue Grizzly
'prepare to grapple & board' .. !!
In the words of Jean Paul Jones.. 'I have yet begun to fight'
This is mere woodland skirmishing to this point

There is nothing 'fair' or 'unfair' in my outlook,
Kansas City rules.. not Queensbury
sledge hammers at dawn in 6' of muddy muskeg .. I am 6' 3"
I have zero partisan or religious loyalties
I decide what is 'fair' - not some fervent evangel political wankers
suckling their entire lives off us.. parasites.. lamprey eels
who are headed to the BC coast.. already entrenched in Alberta

Maybe some day I will take in a 'prayer breakfast'
attended by Jason Kenney, with his Harper scumbag thug Matt Wolf
Few might notice a tottering aged nun who departs early by a side door
10 minutes before an implanted stink device from hell erupts.. childs play

I am a man of reverence at times.. a former altar boyo
its just my sense of humor grows weary of inaction
and I often wonder how fast the release a wondrous batch
of well putrified limburger cheese n offal accompanied
by a recording of the Hallelujah Chorus
might spice up a prayer breakfast.. and empty the venue
& I scarce believe it would be held in a sanctified church anyway..

I regretfully must agree with you, Owen. We are unraveling just as are other nations in our liberal democracy circuit. Some, such as historian, Yuval Harari, suggest that liberalism has lost much of its utility and is on its way out. He makes compelling arguments that we have entered an era of technological order from social media to artificial intelligence and robotics. Algorithms now rule. He offers several chilling examples.

It's been an often rocky road since Runnymede in 1215. We never did get it quite right but we were close. Perhaps if those who bear the ultimate responsibility for defending democracy had upheld the public interest rather than served narrow private interests during the age of globalism, the public might not be so indifferent, even disaffected, to democracy. Austerity, coupled with a massive transfer of unearned wealth into the hands of an advantaged few, has been a horrible betrayal facilitated by confounding, confusing, distracting and misleading of the public. We don't even have a common reality to argue over any longer. We have 'alternate' realities based on often flimsy beliefs that, through repetition, become accepted as facts.

Off-topic, but I have been trying to make sense of the supposed five stages of grief. How do we grieve this world? The "five stages" shtick may work for a death in the immediate family, a divorce, that sort of thing but the entire order gets jumbled when it comes to what we're experiencing today, the accumulating loss, the protracted collapse, the multi-decadal tragedy.

The Globe has an interesting piece by one of the co-founders of the Occupy Movement about the recent surge in public unrest. https://www.theglobeandmail.com/opinion/article-the-new-wave-of-protest-is-an-opportunity-for-humanity/ Worth a read if you can get through the firewall.

Owen, "madly self destructive" acts have achieved a normalcy in governance these days.

Is it time for Canada to distance itself from that dysfunctional royal family?

So much of the information we consume these days is synthetic, sal. We've lost our ability to smell fraud. And Britain is a vivid illustration of what happens when you follow phonies.

.. here's a current sample of 'news' or 'journalism' via The Guardian

Read carefully and note the generalizing.. 'Albertans - sweeping the province' etc etc
Let me know if you spot any indication 'seperation' is not a done deal.. I do not know the authors or the editorial outlook of The Guardian, nor do I know if more than a thousand males primarily - from Alberta, plus their elected provincial government who appear to see it as a fine threat & cover for their cash grab of all pension dollars to come under their purview. Let me me know also if you spot the government or MainMedia rationale for such sensationalist shit disturbing. I do not recall it as an 'election promise'

We are seeing GOP & Trumpstyle travesty & snouting from Kenney Inc. Kenney has never really held a real job, nor has any educational background to speak of.. Just personal & problematic ideology.. and a massive talent for being glib. This is dangerously thin ice to be skating on.. extreme lack of responsibility, ethics.. & Canadian values MIA.. Three more bitter years a comin Alberta.. and you aint seen nothin yet. Jason Kenney with no leash, running wild, spouting his unfounded 'expert' economist fantasies via an evangelical sold out Oil & Gas agenda.. zero Remediation ever.. with 'Royal' majority assent.. I see no sign of a 'conservative' to be found.. however, there are Reform leftovers in abundance.. sign everywhere that this is so... Classic Harper manouvering run wild and loud.. very loud

Thanks for the link, Mound. It seems to me that it's very hard to weep for a dying world order. The tragedy seems almost too big to comprehend. And the size of the tragedy leaves people paralyzed.

Those who the gods would destroy they first make mad, Mound.

I've always felt that the Queen was blessed with good judgment, Toby. Unfortunately, her good judgement has not filtered down to her children. And she will not be with us forever.

Re the Queen.
It is possible that she will be the last of a long line ( of what is debatable).
The problem with replacing monarchy ,as detestable as it is, is what comes next?
What do we replace it with?
I shudder to think of a Trumparchy or a Borisarchy!
With that in mind I throw up with the thought of a Trudeau or Kenny -archy.
We live in a very different world to that that was when Kings and Queens ruled.
We are ,fast, approaching the time when Governments ruled!

If Donald or Boris gets their way, TB, they'll declare themselves the new monarchs.

Con men have been having a good run, sal. And Jason knows how to run a good con.