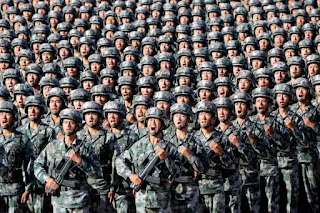 The United States and Britain have been involved in wars for twenty years. Simon Jenkins asks a simple question: Why? After all, the results have not been not encouraging:

The US has spent a staggering $6.4tn on almost two decades of interventions, with more than 7,000 military dead. Britain has lost 634. In addition, unknowable thousands of civilians have died, and billions of pounds’ worth of property been destroyed. Christianity has been all but wiped out in the region, and some of the finest cities in the ancient world have been bombed flat. No audit has been made of this. The opportunity cost must be unthinkable. What diseases might have been eradicated, what climate crisis relieved?

The wars of 9/11 must rank among the cruellest, most costly and senseless of the post-imperial age. Yet in Britain successive governments have parroted absurdities about “keeping our streets safe from terror”. The opposite is manifestly the case. The threat to London is said to be “substantial” and parts of Westminster look like a pastiche of Guantanamo Bay.

The assumption is that at least the public and the military establishment are “behind the troops”. That is clearly not the case. As long ago as 2004 Lord Bramall, who died this week and was once Thatcher’s favourite soldier, challenged the government to prove that the Iraq war, then just a year old, was worth the cost. It had, he said, already proved “erroneous and counter-productive” despite promises that it would bring democracy to Iraq. He added: “One can but wonder what legal – or, now, even moral – mandate the [western] coalition really has to do that.” Bramall was emphatic that he spoke for many in the military establishment opposed to Tony Blair’s mission, undertaken to please the Americans. In the 15 years since he made that speech nothing has changed.


So why do these wars continue? Jenkins suggests that it's all about not looking foolish:

Thick is the glue that keeps western troops on alien soil. Staying is now an exercise in saving face, in not being seen to cut and run. Downing Street wants any chance to play on the global stage, to keep in with America for after Brexit. None of these objectives seems plausible. Nor are they popular. We are stuck with war, and no one can explain why.


Barbara Tuchman called it The March Of Folly.

Email ThisBlogThis!Share to TwitterShare to FacebookShare to Pinterest
Labels: The March Of Folly

These wars continue because they make gobs of money for the arms industries. Producing arms is one of the few high-tech manufacturing industries left in the US or the UK. So wars are needed to fuel demand for current weapons and to provide testing grounds for new ones. That these weapons and tactics have failed to deliver "victory," however you define that, is entirely beside the point. Just like Big Pharma, Big Arms is more interested maintenance of sales than in victory or cure.

the cost is immense and hasn't improved the lives of those living in the countries. well perhaps the stogies of the Brits and Americans. All this war has however, make armament corporations billions upon billions. that is the aim of the game, making money. when you have a look at the American budget for the military and their various private corporations, they're making money. as long as money continues to be made, wars will continue. what is amazing, is that soliders continue to play this game. now it might be said, they too are making money, but really at the cost of their lives and their mental health along with those of their children and families.

they could have gotten out of Iraq when they found there were no weapons of mass destruction. they could have said, sorry, here is a trillion to rebuild the country and we're out of here, but no..........

the Kurds were able to get their part of the country up and running and if given the opportunity, I'm sure they could help the rest of the country. Some may worry Iran will move it, its doubtful.

then there is all that oil, which the americans and brits want, or rather their corporations want. as we heard dtrump say, they wanted to protect the Syrian oil, but not the Kurds. It always comes down to oil and money.

People ought to simply vote out of office these war mongers and soliders ought to simply say, enough is enough. The U.S.A. could easily use their military to rebuild large sections of the country after all the huuricanes, fight forest fires and rebuild after them, etc. But large corporations won't be making as much money and the key politicians won't have any thing to deflect the attention of the voters to. Hey lets have a war and people won't notice how bad the bridges and roads are in the country.

War is a money making bonanza, e.a.f. -- for the right people.

Some people -- those who haven't been in a war -- think it's entertaining, John. Those who have been there have no such delusions.