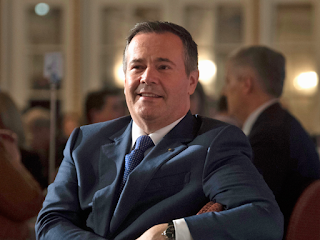 The pattern is pretty clear. Wherever conservative governments come into power, one of their first targets is education. It has happened in Ontario. And it is happening there again. But it's also happening in Alberta. Duncan Cameron writes:

The province should be building on its recognized education system (students ranked third in the world in science and reading, seventh in mathematics) and welcoming more graduates to the most complete post-secondary system in Canada.

Alberta has two research universities rated in the top 200 in the world. As post-secondary education expert Alex Usher has pointed out, based on population size, only Switzerland, the Netherlands, and Massachusetts do better.

Created over 50 years ago, the Northern Alberta and Southern Alberta Institutes of Technology (NAIT and SAIT) give Alberta two big polytechnical schools that along with big and small universities prepare graduates to contribute to the knowledge-based economy.

In an incomprehensible attack on the foundations of an advanced society, the Kenney government has decided to slash funding for the current financial year (that ends next March) to the university sector by five per cent, with further cuts of five per cent projected for each of the following three years.


But Kenney has made exceptions to the cuts:

Pointedly, the Kenney government excluded the four faith-based Christian universities from its cuts, while singling out Grant MacEwan University and Bow Valley College for initial 7.9 per cent reductions.


When it comes to cuts, Kenney dishes them out to his enemies and protects his allies. And, overall, he hamstrings his province:

The consequence will be to throttle back the research activities of these world-class institutions, forcing the universities to reduce all spending on items not covered by long-term contracts and denying Alberta students access to important opportunities in the emerging sectors that drive the modern world economy.


Kenney dropped out of university after his first year there. He didn't need a higher education to get to where he is. Perhaps he figures he's Alberta's everyman. Unfortunately, he's deluded.

Image: The National Post
Posted by Owen Gray at 8:30 am

Email ThisBlogThis!Share to TwitterShare to FacebookShare to Pinterest
Labels: Kenney's War On Education

"The consequence will be to throttle back the research activities of these world-class institutions... denying Alberta students access to important opportunities in the emerging sectors that drive the modern world economy."

I agree with you, Anon. If you initial your comment, I'll publish it.

.. Big Oil & Gas in both Canada and the USA have long been meddling in education curriculum.. all levels, primary through to higher education.. indeed into the faculties. The age old maxim 'fight the battles you can win' is employed by them.. but so is an equally old practice.. 'poison the wells' ..

The Koch Brothers wield enormous power.. funding, lobbying, grooming.. of taxpayer paid 'public servants. Pro Life & evangelistic factions are also infecting democracy and political parties, funding think tanks.. all are going for the throat.. purpose ? To take control of the levers of political power.. and thus be able to dictate policy, legislation, process to whatever end game they espouse. We have classic examples in North America yet the voting population (the common sense, literate or concerned taxpayer) has no power really, no control.

We got an ass kicking from Stephen Harper, Mitch McConnell doing the same via a Senate Majority in the US. Lord Ford of Ontario now dabbles with 'Notwithstanding' usage and retroactive legislation to quash class action lawsuites already dealt with in Court of Law. Who controls Jason Kenney ? Not the taxpayer, not the voter.. thus the new smartest guy in the room rules supreme.. and with the Harper drafted Alberta Firewall Letter as his holy bible. Horgan in BC.. is sniffing the big money from LNG.. lots of frackin in NE BC for natural gas.. bring the supertankers ! Trump topping even Harper by destroying environmental legislation & protection.. Like, who is feeding him these targets to take out. He aint the kind of guy to think on those channels.. he's way more mundane & slow.. plus he just don't care

Where is our Mainstream Media gone to wither & die ? MM is more ghoul.. walking dead than vibrant and sound.. useless to us

Big money has a long history in politics, sal. But, these days, it absolutely rules the roost.

It isn't just about education, its about the Unions which the workers belong to. The aim is to destroy the strength of the Unions which represents every one in the education field. They are strong, organized, smart. In Kenny's world, that can't go on. Kenny believes if they are being attacked they won't have time to attack him.


If you're going to destroy a society and bring it down to your level, you first destroy the educators. Just have a look at Pol Pot and Mao's Cultural Revolution. People with education were eliminated. This is just the current version of the same game.

When dictators come to office, they usually arrest and murder intellectuals and educators. They don't let them out of the country for fear they will continue to their opposition.

When education is only the prevue of the wealth, it advantages them.

When a province has a high unemployment rate is doesn't make sense to create more unemployment. so you ask you self why does Kenny do it. The above will explain.

Kenny and Ford want to create an Alabama style education system. Alabama is rated 48th in the U.S.A. for its education system. It isn't expected to get better. Ford is making "changes" to the education system also, as in destroying it. His preference for "computer" learning is just the first step. To day he cited Alabama as a great e.g. of computer learning and education. Watch Kenny do the same and then watch the American systems move north. I do expect to see charter schools come to these two provinces.

of course these religious "educational" facilities will be given more money. they are the favoured.

People in Alberta had a decent government and voted to replace it with a man who is all about himself, his religious beliefs, and his quest to be P.M. They got what they deserved. I just feel sorry for the children of Alberta who will encounter greater difficulty in education and life.

It makes one wonder what the people of Alberta will do when they realize they don't have their jobs back, tar isn't in demand and most likely won't be again, and their education system is flat and broken? the last one leaving can turn out the lights.

With Ford wanting to bring Alabama style education to Ontario, go have a look at the corruption and poverty in the state. A good blog to start with is Legal Schnauzer. Jeff Sessions home state. the word corrupt doesn't begin to describe Alabama, in my opinion.

Here in B.C. although the former government started building Site C, and the NDP has continued it, year over year, B.C. uses less electricity.
energy isn't what it used to be.

If the people of Alberta and Ontario want to drink the cool aid, who are we to stop them. The tar isn't going to sell. Coal is cheaper and China is using a lot of coal from South America and various countries in Africa.

As Kenny and Ford drag down their provinces' education and economy, they will continue to blame Trudeau and Ottawa for everything.

People like Kenney require an enemy to justify what they do, e.a.f. You can count on him to find as many enemies as he needs.