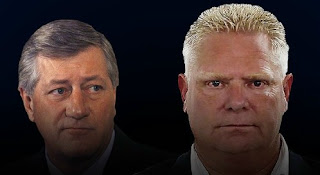 Like premiers before him, Doug Ford has gone to war with Ontario's teachers. Martin Regg Cohn writes that Ford is hoping for his Mike Harris moment:

For months, the Progressive Conservative government has scorned the teachers as ungrateful and greedy. Now, they are raising the rhetoric to fever pitch, fantasizing that they can replay the Mike Harris playbook from 1995, when another PC premier took teachers on.

But Ontarians have seen this scenario one time too many. Ford is in no position — politically or fiscally — to reprise the Harris role of pretend Robin Hood, purportedly taking from rich teachers to give to poor taxpayers.

Today, Ford’s popularity is in free fall; his first education minister, Lisa Thompson, was thrown under the bus; and her successor, Stephen Lecce, is the new fall guy. Call it the domino effect.

Thompson had proudly announced that average high school class sizes were jumping from 22 to 28, and loudly proclaimed this would make students more “resilient.” No matter that thousands of teaching jobs would be cut from the system, she argued that students would be enriched by four mandatory online courses — an untried experiment.

Lecce leapt to the rescue, dialing down the teacher-student ratios from 28 to 25, and cutting the online courses from four to two. Enraptured by his rhetoric, Ford fell in love with his new “all-star” minister, hailing his persuasive powers in public.


However, Lecce soon headed for the rocks. That's because he's not the one calling the shots:

The politician pulling the strings here is the man who controls the purse strings behind the scenes on Ford’s behalf, Treasury Board President Peter Bethlenfalvy. A little-known business executive who boasts of his Bay Street credentials while baying about a supposed Venezuelan or Greek-style bankruptcy crisis in Ontario, Bethlenfalvy is the driving force behind the contrived austerity emergency. Yes, the government inherited a major deficit last year, but only half as much as he first claimed ($7.4 billion, not $15 billion, and only after Bethlenfalvy ignored outside experts by pretending Ontario didn’t enjoy an $11 billion surplus in employee pension funds).


The revised deficit was close to Kathleen Wynne's projected deficit. And the difference between the two figures is roughly the same amount of revenue the government lost when Ford cancelled Ontario's cap and trade system.

Put simply, Ontarians know they've been conned. And they know their premier is not a bright guy.

Email ThisBlogThis!Share to TwitterShare to FacebookShare to Pinterest
Labels: Ford and Harris

I would note however that the real Harris moment here is the create a crisis scenario that Snobleton orchestrated as offered here by the bay street wunderkind.

Why should we bother teaching the kids to add and subtract when all we have to do is to get these guys to show them how to kiss ass? They don't have a clue about arithmetic and look how far they've gone in their political careers. Maybe they can even do it online.

Education should teach you how to do things, John. But it should also teach you wisdom. These folks don't know how to do things. And they don't possess wisdom. Th moral is that you need neither expertise nor wisdom to become premier. But it's clear that there is a price for electing people who possess neither.

If Gordon Campbell is still a Ford "advisor" what is going on there is what played out here in B.C. for 16 years. A constant attack on the public education system. They wanted more private schools, in my opinion. Not only did teachers strike, the B.C. Lieberals (cons) not build sufficient schools, those which needed earth quake resilient re structuring, weren't. the children of B.C.'s lives didn't matter.

I would not be surprised if the American private education corporations have been up to "chat" with Ford and his gang. Buy us, buy us. As was written on this blog, the computer courses idea come from Alabama, 48th down the line for education in the U.S.A. and they don't have a good system to begin with. Ford and his want this in Ontario because a dumb population makes dumb decisions and don't engage in critical thinking. hello Texas and the U.S.A. in general. What you wind up with is dtrump as President. In Canada, we'd wind up with some thing similar.

When teacher aids are removed from classes and class size increased all the children suffer. At a time when many of these children are undiagnosed autistic children, they think 1 in 43 are, and live below the poverty line, some in in adequate housing, even two extra children can be too much to handle for one teacher.

A good education isn't about teaching kids the answers to questions, but what questions to ask to begin with.

Taking teachers on is also a way to send the labour movement a signal. Out in B.C. the Teachers Federation (Union) is a force to be rekoned with. They're intelligent, have good education, and are well organized. they're every thing a right wing bunch of baffons hate.

When I was young, and B.C. elected its first NDP government, one of the things we saw for the first time, were teachers going in pairs to homes, door knocking and simply explaining what each party's platform talked about when it came to education. it was the first time in B.C. history that had happened. The NDP won. The Socreds were creamed. I do believe the year was 1972 or so.

All I see when I look at what is going on in Ontario's education system, is the fine hand of one Gordon el gordo Campbell. Good luck to the children and their parents.

You've lived through this kind of stuff in B.C, e.a.f. And you know where it all leads.