Guilty. It Couldn't Be Clearer 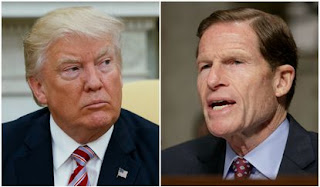 Yesterday, the House Intelligence Committee released its report into Donald Trump's shenanigans in Ukraine. Senator Richard Blumenthal -- a former federal prosecutor -- writes that Trump was bribing the Ukraine. And bribery is an impeachable offence:

President Trump solicited a bribe. And the Constitution makes clear that a president who engages in bribery “shall be removed from office.” In fact, along with treason, it is one of only two crimes specifically mentioned as conduct that would necessitate impeachment and removal.

Before I joined the Senate, I spent decades in law enforcement deciding when bad conduct rises to the level of illegality. Any good lawyer starts with the legal text, and when the Constitution was drafted, bribery was defined broadly as any “undue reward” for a public action. As illustrated during the House impeachment inquiry, which moves to the House Judiciary Committee on Wednesday, a political investigation ginned up to reward Trump for providing needed military aid would certainly fit the bill.

But even under the narrower definition of bribery currently in the criminal code, Trump’s actions clearly qualify. Federal law defines bribery as the solicitation of “anything of value personally” by a public official “in return for” an official act. It also specifies that a bribe can be a reward for an act the public official would have done anyway. In short, merely soliciting a bribe is bribery.


The entire Republican Party -- in the House and Senate -- offers two defences of Trump:

First, they argue that Trump can’t be guilty of bribery because Ukraine never conducted the investigations he demanded and because the country still received military aid. Of course, the money was released only after a government whistleblower exposed the president’s plans. As a law enforcement official, I prosecuted criminals whose illegal schemes failed because they were caught red-handed. None had the gall to say they were innocent because their crimes did not achieve their goals. Ineffective criminals are still criminals.

The bribery statute makes clear: Soliciting a bribe is illegal even if the bribe is never paid.

Second, Trump’s defenders argue that no one has testified they directly heard Trump order anybody to demand a bribe. Apparently, they want us to believe that Giuliani — a private citizen — ran a shadow foreign policy to secure political benefits for Trump without Trump’s knowledge or support. The fact that Trump specifically told foreign leaders to contact Giuliani is simply an unfortunate coincidence.

That no witness heard Trump utter the words “please solicit a bribe from Ukraine” should not be shocking. Anybody who has watched a mob movie knows criminals don’t spell out their illegal plans to every subordinate. More importantly, individuals who might have heard Trump say those words may have unlawfully refused to testify, at Trump’s request. When a defendant improperly withholds evidence, courts instruct juries to assume that the evidence would not help the defendant. Americans should make the same assumption here.


But simply, Trump solicited a bribe -- an impeachable offence -- and he was caught red handed. Any other criminal would be sent to jail. But, because he's the president, Trump will probably get off.

Is this "Truth, Justice And The American Way?"

Justice be damned, it's been the American way since Reagan beat the Iran-Contra rap by reason of dementia. I believe Trump will skate this time for the same reason.

Trump's signs of dementia are becoming hard to ignore: inability to recall what he's just been told, slurred speech, perseveration, confusion, disorientation, difficulty reasoning, impulsivity, and so on. The physical signs are there as well: balance issues, weaving when walking, limited upper limb mobility, etc. Compare a campaign video of Trump in 2015 to a recent one. Trump famously stalked around the debate stage, gesticulating wildly. Now his hands grip the lecturn and rarely leave it. He seems incapable of raising his left arm. There was the recent emergency visit to Walter Reed for reasons never disclosed. Trump's dad died with Alzheimer's and he looks like he's going the same way. His enablers will cover for him as long as they can, just as they did with Reagan, but Trump is declining quickly and it'll become harder and harder to hide.

And as his decline hastens, Cap, he becomes more and more dangerous.

.. an analogy might be useful..
I write a lot of fiction.. in many cases it involves how a protagonist.. pursues their target.. I got my first bath in this kind of thinking & perception as a young man reading National Geographic.. and years later reading 'Track Of The Grizzly' .. all related to the experts.. the Craighead Brothers of Yellowstone. Despite their expert opinion, it was decided to abruptly close the dumps in Yellowstone Park.

The Park Admin asked the Craigheads for assistance.. assist in the finding of and euthanizing of the offending bear or bears

They joined the group of rangers etc.. and followed the obvious trail.. Suddenly the Craigheads stopped.. motioned.. got the party to retreat quietly & quickly. They looped around to approach the trail from the side & downwind.. The bear was there hidden atop a rock from anyone on the trail. It had backtracked to ambush, kill pursuers and feed again.. it was truly rogue. It was an old bear, broken down teeth, mating war wounds.. but it had become accustomed to dump foraging year round.. and suddenly had no real food source. Just as the Craigheads had predicted.. which was 'politically unfavorable' to the Park Admin

My point.. the obvious is not really useful in dire or extreme times. Cast aside the ritual response, the common sense solutions, break away from patterned pack behaviour or belief.. Get a grip, get survivalist - get mean, go lateral.. activate intense critical informed thinking.

Trump and the GOP represent a clear threat to Canadians. On the Environmental and Pollution file it should be obvious.. it will be disastrous. Do not expect, much less count on Mainstream Media in Canada to lift a lazy finger of assistance or comprehension.. that Canuck horse left the barn a ways back. Do not expect, much less count on your Federal or Provincial Government to defend you. A high percentage think Trump is annointed by gawd.. he excites them

Your elected riding MP is whipped.. does not intend to represent your safety, dreams, needs or wishes .. you have served his interests however... Your political parties are long since 99% tired, jaded, corrupted or befuddled.. or worse sold out just for $ .. take your pick of their excuses or who owns them.

Our Parliament is archaic, clumsy, inefficient, moribund.. We waste a day of governance on the Monarchy ritual dance. The mace is trotted in.. all bow.. The Governor General will speechify.. mebbe wave a ceremonial sword.. ergh. Then comes the farcical 'question period' as portrayed and managed once by poor Andrew Scheer, retired Multi Millionaire Insurance office cabin boy.. in his dream home with his brood of 7.. never an expense spared by the generous taxpayers !! Did I mention The Sober Second Call To Wealth called The Senate ?

Corruption is all around, sal. It's the order of the day.