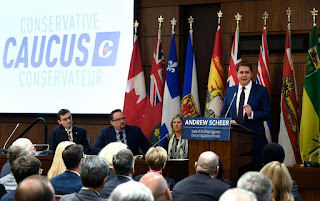 There is a way to lead a political party after a defeat. Robin Sears writes that Tommy Douglas was a master of the art:

Having lost more elections than any other contemporary political leader — 1962, 1963, 1965, 1968, and his own riding twice (!) — it is a little staggering to reflect that Tommy Douglas never endured a leadership challenge until 1971. His success was grounded in an evangelical skill at persuasion, but even more importantly, his ability to rebuild confidence and conviction even on a losing election night.

His election night speeches became a cliché, but to hear him deliver it, to a room full of hardened farmers and tough factory workers, many in tears, was always a stunning moment. He would start slowly and then his voice would rise to a crescendo: “My friends. I am hurt, but I am not slain … I’ll lay me down and bleed awhile, and then … I’ll rise and fight again.” You believed him and you immediately felt better.


Jagmeet Singh and Justin Trudeau  have taken a couple of lessons from Douglas. But

then there is Conservative leader Andrew Scheer.

He has broken most of the rules of tribal leadership following defeat, already.

Older Conservative clan leaders have not felt consulted or respected. Defeated and depressed former MPs and candidates have not been given a persuasive call to arms. The media — always suspect in contemporary Conservative circles — have been given no believable narrative about his path to rebirth, leaving a couple of savvy Tory operatives license to magnify and exaggerate the extent of open rebellion against him.

It did not need to be this way. It may not be too late for those who want him to survive, to mount a counterattack. But Scheer himself will have to decide and declare a change in his thinking on cultural issues and climate. Even many Conservatives who wish him no ill are gloomy about his willingness or ability to so do.


Mr.Scheer's future does not look rosy.

Image: The Toronto Star
Posted by Owen Gray at 9:53 am

You post puts us in mind of the dearth of true leadership in contemporary politics, Owen. While it is true that everyone who runs hopes for victory, in the past that hope was coupled with real principles, best embodied by Tommy Douglas. Today, it seems to be only about the winning.

As Vince Lombardi used to say, Lorne: "Winning isn't everything. It's the only thing."

.. 'What have you done for me lately'.. seems the codeword Owen..

I cannot express just how momentous my grief is for Andrew Scheer's failed grab for the brass ring, indeed the entire non conservative political party that brand themselves as Harper did, via a hostile Brand takeover via Peter McKay. Today's entity is the warmed over Harper Reform Rump.. the 'proud' pimpers of 'contraryism' which is their current dogma. Carbon tax.. not for them. Climate warming ? Never happened. Trump ? Exciting ! Election Fraud R Us.. their stock & trade. And there, lo.. building in layers of sedimentary partisan slime.. the constant stench of evangelical & pro life crusaders on some holy political mission. Jason Kenney just a distant provincial disciple or high priest.. Ford much the same.. but passing the collection basket too

Conservatives is a misnomer for these folks, sal. They're Randians. Ayn Rand is their oracle. They are not who they claim to be.

The only honest thing i have seen a conservative do is drop the progressive from their title.

Good point, lungta. There is nothing progressive about the Conservative Party.

Scheer could hang on to his leadership, but he is too ingrained in his beliefs to be able to do that. He fired the wrong two guys. He ought to have fired Hamish Marshall. He ought to have owned his mistakes and taken some advise and moved his party to the center a bit. He isn't going to do that, because he is one of those religious nut bars, in my humble opinion. Tbey don't see anything but what they believe it.

The Conservative Party isn't even conservative. they're far right of center. If they looked up the word conservative they'd see they don't qualify. However, had the party looked at Scheer's record as Speaker of the House, they could have seen what was coming. He doesn't under stand the word flexible.

It's true that Scheer isn't flexible, e.a.f. But neither is his party.