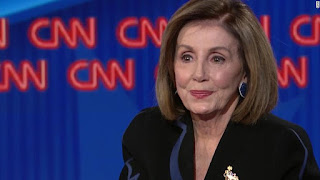 One of the many things that have been lost in the Trump years, E.J. Dionne writes, is the art of persuasion:

One of the most debilitating aspects of our politics is the assumption that nobody can be persuaded of anything anymore. We are said to be locked into our identities, our media bubbles, our religious beliefs (or nonbelief), our homogeneous neighborhoods and our online friend groups.

Elections are not simply census-like head counts, and political arguments are about more than marshaling talking points to solidify the views of those who are already on your side. The advantage of democratic republics is that they foster a free exchange of opinions. This makes it possible for all of us to learn things we didn’t know before, and even change our minds. This process, in turn, allows for national self-correction.


That's why Nancy Pelosi's answer to the reporter who asked her, "Do you hate the president, Madame Speaker?" was so important:

Her answer brought cheers from her admirers, especially from liberal Catholics who were buoyed by her insistence that “as a Catholic, I resent your using the word ‘hate’ in a sentence that addresses me. I don’t hate anyone.” It was bracing to see Catholicism invoked as a call to Christian love and prayer — especially for Trump.

She knows that Trump’s apologists want to keep the focus on the motives of the president’s opponents and to make this battle about nothing more than partisanship. Those who would let Trump get away with anything want us to talk as little as possible about his own behavior. Their claim is that it’s all about identity — the president’s big-city, liberal, Christian-hating, elitist, immigrant-loving, politically correct enemies vs. his hardworking, religious, gun-rights-defending, taxpaying friends who live in small towns and the countryside.

Pelosi’s invocation of her faith was one way to blow up this narrative, but her care in separating out her political disagreements with Trump (on immigration, guns and climate change) from the reasons for impeachment (his abuse of power and constitutional violations) reflected an awareness that opinion about impeachment is still fluid. Yes, there is room for persuasion.


But persuasion requires an ability to make distinctions. The political pundit Mark Shields pointed out last week that Pelosi was channelling St. Augustine: hate the sin but love the sinner.

How many of us are able to do that?

Email ThisBlogThis!Share to TwitterShare to FacebookShare to Pinterest
Labels: The Art Of Persuasion

What I especially liked about her rebuke, Owen, was that it showed the kind of outrage so often on display in Republican circles, the difference being that hers was justified. Maybe it's time for more Democrats to stop being their usual restrained, polite, reasonable selves and show they have real backbone.

Trump is a bully, Lorne. And he'll only bully those who have no backbone.

.. words & terms matter.. so does context.. bigtime !
Some call it stance.. I look more for 'standing'..
Thus I may have myriad reasons or rationale for my opinions
but do I have any sort of 'standing'.. or its valid cousin, street cred ?

A current example is Canada's own Warren Kinsella ..
the breathless media story goes that he will be sued
by that oddfellow Maxime Bernier for calling him a racist !

So what defines a racist ? Yes yes.. we think we know
certainly Mr Bernier's lawyer believes he and Maxime know
but what of Mr Kinsella's opinion or use of such a term
in this specific lawsuit.. if it ever comes to that.. ?

If we thought Kinsella had achieved levels of fame prior
this potential case may take him and Bernier into lunar orbit
Will there be a clear winner.. or just joint losers ?

I for one do not believe Bernier will persist.. will fold his cards
I predict Kinsella will call his bluff, let him off easy
Why do I believe this?

Bernier in 'on the record' all over the place, both languages
and who knows what witnesses might surface..
with private damning texts or emails..

Kinsella however has 'standing' .. look him up on Wikipedia
solid track record going after racists & legal wins, published books

Pelosi is no spineless whiner or obstructor.. more the warrior
Meanwhile, name a single GOP with 'standing' on these specific matters
McConnell, Nunes, Graham, Barr, Hannity, John Kennedy ? Pense ??
She is backed by the US Constitution, Trump by.. uh Twitter ?

Who is standing atop the other ? This is historic.. unfolding
Trump is caught in a classic enfilade.. disaster
Pelosi et al simply need to keep firing into the kill zone

Who really really wants to die politically for Trump ?
To go down in the history books.. as being found wanting..
.. with no standing whatsoever

The white flag moment is a helicopter ride away, a la Nixon
but straight to Mara del Lago.. with Hannity & mebbe Giuliani
and Secret Service babysitters for life.. in golf carts no less

A resignation and a helecopter trip to MaraLago are devoutly to be wished, sal. But, given who Trump is, both are very unlikely.

I'm always leery of politicians invoking religion as a justification, and I apply the same standard to Pelosi as I do to Scheer. Pelosi's point would have been made more succinctly had she simply said, "I don't hate anyone. So don't mess with me when it comes to words like that." The argle bargle about praying for Trump persuaded nobody, certainly not Trump's white Evangelical base who will cooperate with Catholics only to advance their war on women's autonomy.

I have no issue with a politician being religious. But when they use religion to justify their acts they lose me.

There are those who will look cynically on Pelosi's Catholic reference, Cap, But I suspect that Pelosi doesn't always follow the Papal line.

There are only two impediments to a more inclusive and honest electoral system in the U.S. and elsewhere, including our “slightly delinquent” country... big money and religious fanatics....
Its a toss up which group will take over the world IMHO Owen (if climate change does not get us first!).....
Me, cynical? Yep

We are not doing ourselves proud these days, Rural.