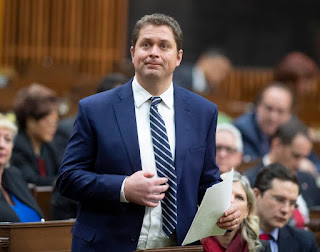 Yesterday, Andrew Scheer resigned as leader of the Conservative Party of Canada. There are, Susan Delacourt writes, interesting parallels between the fortunes of Scheer and Joe Clark:

The Joe Clark parallels have come up a lot in Scheer’s relatively short reign as Conservative leader. A largely unknown politician from the West, an unlikely competitor against a charismatic Trudeau, this very newspaper marked Scheer’s 2017 leadership victory with the headline “Andrew Who?,” just as it gave Clark the “Joe Who” nickname that endured throughout his ill-fated years as leader.

Scheer didn’t even get the short run as prime minister that Clark did, but he came tantalizingly close, and politics can be even more unforgiving for leaders who almost make it. Scheer was probably never going to be allowed to get past his inability to defeat Justin Trudeau in this year’s election, just as Clark was never quite forgiven for letting the power slip from his hands on a cold December night in 1979.


The defeat of Clark's government brought Pierre Trudeau back into the game -- and lots of things happened:

When Clark’s minority government fell, Pierre Trudeau was lured out of retirement and romped back to power in 1980 for a final, four-year mandate that put his indelible stamp on Canadian history — notably a new Constitution and a Charter of Rights and Freedoms. Without that final four years in power, it’s been argued, Trudeau’s legacy would have been more of the footnote variety — a prime minister who blazed briefly, if meteorically, across the 1970s with a handful of small achievements and checkered controversies to his credit.


Justin Trudeau is not his father. But Scheer's resignation means that the Conservatives will be busy remaking themselves. And Trudeau the Younger may have the opportunity to do big things:

Justin Trudeau and his Liberals would be totally fine with having another four years in power, perhaps to do some nation-changing kind of things that happened in the early 1980s — new national programs (pharmacare, for instance?) or, if they’re really ambitious, a national-unity adventure like the constitutional saga of Pierre Trudeau’s last mandate. (Though presumably Justin Trudeau doesn’t want to replicate some of the disunity that also arose from those years, notably in Quebec and the West.)

Image: The Toronto Star
Posted by Owen Gray at 8:52 am

Passing the Charter of Rights and Freedoms took a vision of the country's future that I don't think Justin is capable of. Justin backs away from progressive change when he meets resistance.

As for the Cons, they could do a lot worse than electing John Baird as leader. Although he beclowned himself early on as a Harper attack dog, he had the good sense to leave the government early. He's from Ontario, has a good record on LGBTQ issues, and is not an anti-abortion fanatic. On second thought, he hasn't a chance.

The Conservatives have dumped their leader, Cap. But they haven't dumped the platform they ran on. Until they rethink what they stand for, they'll remain in opposition.

Now what indeed. The hapless comings and goings of this present Government, Alberta, Ontario, the Harper years, the folly of the Liberals post Cretien, Obama, Trump, and now the present doom and gloom of the results in the UK leaves one to just shake a bewildered head. Now to add the present state of the Canadian Cons a search for a new leader in an all ready mired cess pool of leadership just makes me cringe. What buffoon will rise up to take the reigns of lies ? Baird, my God , perhaps Harper's son or Ben Mulrooney. It's not that I view the present situation, here and abroad with fear and loathing as much as a feeling of heart break

The late Elisha Cummings was famous for saying, "We're better than that," zoombats. Now is the time to prove it.

Elisha Cummings might have been that, but the rest of us are definitely not. We're going the other way. Is it time to consider that we might need more optimists or at least to start giving an ear to the ones who have survived? I think I'll ask our neighbourhood Pollyanna for her ideas on that question and some others when she brings mom her Friday chocolates this afternoon,

There's always two ways of looking at the liquid in the glass, John. There always has been.

I'm not too sure about the remaking of the Conservatives Owen. Michael Harris has an article on yesterday's Tyee about the return of Harper. That would be the ultimate disaster. RG

A really interesting piece, RG. And I believe Harris has good instints. I don't know if it will happen. But, if Harper is resurrected, the party platform will essentially stay the same.

Don't know if Harper will come back. He most likely is making much more money these days. Politics have also changed in the last few years. If harper had to run again, he might find even the advertising against him different. This is the man who forced his party to pass 8 pieces of legislation which violated the Constitution. Run a few ads comparing him to dtrump and it could be all over.

Scheer will never be a Joe Clark. Joe went on to rebuild a base of public respect that Scheer will never achieve. His rejection of the Reform/Alliance takeover of the Progressive Conservatives as that party was betrayed by Peter MacKay was possibly the zenith of Joe Clark's political career.

As for Harper, I doubt that Canadians would welcome his return. He had no vision while he was in power and his former BFF, Tom Flanagan, says he eschews the very idea. He's on the wrong side of the climate emergency and some "come to Jesus" moment at this point would be much too hypocritical for anyone to swallow.

Time will tell, e.a.f. Coming back might appeal to Harper's ego. But, if he's smart, he'll listen to wiser counsel than the members of a desperate party.

Wise analysis, Mound. But I note that blatant hypocrisy seems to have gone viral.