Insanity And Self Destruction 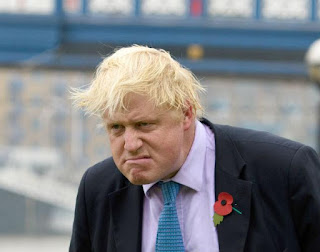 Polly Toynbee warns her readers to be afraid -- very afraid:

In erstwhile Labour-land, Brexit is the tin-opener that gives Conservatives a chance, not with dog-whistle but foghorn. That old populist template casting honest working people as being deceived by “the elite” echoes down the centuries from the far right. Already hard-pressed seats suffer from 10 years of lost public jobs, investment and services, yet Johnson urges them to blame not entitled Etonians but Jeremy Corbyn’s “great betrayal orchestrated from Islington by politicians who sneer at your values and ignore your votes”.

This old script worked for Mussolini as for Brazil’s Bolsonaro. It worked for Donald Trump, and, across Europe, for Silvio Berlusconi, Matteo Salvini, Viktor Orbán and Jarosław Kaczyński. Never mind if the messengers are hyper-elite metropolitans or kleptocrat billionaires: the trick works because they all use the same tin-opener – gut nativist “build the wall”, us-and-them fear of foreigners. The EU stands for that foreigner in Johnson’s refrain: “End uncontrolled and unlimited immigration from the EU, take back control from an unelected elite in Brussels.” He tells Sky News he will no longer let EU migrants “treat the UK as if it’s part of their country” – a sinister threat.


This is all old hat now. And, if Johnson is elected, no one can claim that they didn't know what they were getting:

If the UK gives him a majority, let no one pretend they didn’t know what he was about. The music is so familiar, we recognise these old Enoch Powell tunes. If some shrug it off as what politicians say to get elected, it’s not. Powell was thrown out of his party, too out of step; yet Johnson has expelled those who won’t sign up to his new Powellism.


Johnson is making dark references about changing the Constitution. The Conservative manifesto declares:

“After Brexit we also need to look at the broader aspects of our constitution,” the manifesto says, to “update the Human Rights Act and administrative law to ensure that there is a proper balance between the rights of individuals, our vital national security and effective government”. That “updating” means leaving the European convention on human rights, us alone with Belarus. Johnson, free from those restrictions, will unpick “the relationship between the government, parliament and the courts; the functioning of the royal prerogative; the role of the House of Lords; and access to justice for ordinary people”. Judicial review, the citizen’s guarantee against overmighty government, will be stopped from being “abused to conduct politics by another means”.


If Johnson is elected, he will "take revenge on the legal system, on remainers, on human rights and on any democratic aggravations that stand in his way. We saw how fast his people moved to threaten to “review” Channel 4’s licence when it empty-chaired him for refusing its climate debate. Ofcom backed C4: what price will it pay?"

Insanity and self destruction march on.

Email ThisBlogThis!Share to TwitterShare to FacebookShare to Pinterest
Labels: The Johnsonian Threat

.. as with Trump etc.. sure, shoot Boris the messenger.. but the most dangerous fault lies in corrupted political parties and the existing pathways & processes they have built upon.. They're just like a vast peat fire.. or termite colony always thriving & cooking but not always obvious or visible, despite their great size, resources and capability.

The political parties in Canada are what draw my ire, my fears, my anger & my reaction. Britain to me is a collapsed old colonial empire and still (somewhat) ruled by a token Queen.. Some sort of Divine Right of birth one assumes. The upper crust much the same. The biggest assets a political animal can have are glibness & astonishing retention of dogma and talking points.. the rest is pure horse manure of course. This is the new era where political parasites thrive despite deception, deceit and ignorance.. They are 'on the take' while stealing from taxpayers and sellong out to Big Business.. and they don't care.. they can suck and blow while sleeping like promiscuous vermin with sold out Mainstream Media

Deception, deceit and ignraonce. No democracy can survive a co-ordinated assault from all three, sal.

Precisely, zoombts. As a scholar of the classics, Boris has been far too impressed with the Greek and Roman gods.

The UK media including the BBC and the Grauniad and its rather nasty chief editor Jonathan Freedland have attacked Corbyn as if he were the wizened devil itself, and an anti-semite one at that. As the retired speaker John "Ordah!" Bercow has said, Corbyn is no anti-semite, and he's known him for years. Makes no difference. They even dragged out the Chief Rabbi to impugn Corbyn.

I was born in England, became an 11 year old landed immigrant to Canada in 1959 and returned for grad study from '69 to '74. During my last stay, the place was rather free and nobody paid the aristocracy much notice, because a new leaf seemed to have been turned. The UK joined the EEC in 1973 after all. But already Mrs Overbite Big Hair Margaret Thatcher was harumphing around in the Tory back benches, a sort of souped-up Mary Whitehouse who spent the '60s complaining about lack of morals in society. And a bloke name of Enoch Powell beat the xenophobia drum concerning "foreigners" filling up Blighty. He was mightily derided from all sides. Then. Now, he'd seem like a reasonable chap compared to Farage because he wasn't a blood and guts guy, he just foresaw deep future social problems and argued immigration should be stemmed. He was off key compared to society then, and paid the political price.

Well, no-nonsense Thatcher and deadhead Ronnie Raygun introduced actual neoliberalism, going from theory to practice in the early '80s, and it's been downhill from then on. In the UK, it meant flogging off Crown corporations to private enterprise for peanuts and influence. The resulting private companies proved less efficient and more expensive than before (well someone had to pay profit), the railways a prime example.

Fast forward to today when you have the snake Boris at work, a sort of Derek Fildebrandt/Jason Kenney conjoined twin of nastiness from Alberta, all wrapped up in a singular prime dork of capricious semi-aristocratic right wing nastiness. Johnson is willing to tell any lie, dun any opponent in any manner, and act like the obvious sociopath he is. He is completely unsuited for any other job in modern society than being a spouting hooligan politician, and a knowledge of classic Greek plays means bugger all in a digital world, which is why he doesn't give a sh!t about industry and Brexit. Let the lower classes suffer. Unimportant to a disturbed egghead like him. So long as he remains in power, and he will this Thursday, the Brits are nothing if not stupid on the "class" issue acting like Mrs Bucket from the sitcom Keeping up Appearances, so the Tories will win. Boris has to learn nothing apropos to modern society to be an overbearing PM cutting up social policies and throwing them away just for public schoolboy japes. He can just act like an autocrat, and will.

I pity my poor home country. They are about to descend into hell voting in a disturbed man as PM. Polly Toynbee is reliable and no doubt correct as to consequences. The end of Blighty as a country with any influence, and likely to be even more of a US poodle than we are. The rest of the EU will say good riddance, and Boris will insist it's their loss the UK has Brexited, because upper class Brits uniformly regard themselves as geniuses. No one more than the dumb nasty twit Johnson himself.

There is a blight on Blighty, BM. And it's painful to watch it canabalize itself.

people get the government they deserve. they voted for them, it were their own actions. usually when voters fall for the populist rantings of politicians, the politicians want to restrict rights of citizens. they do this by saying they're going to save the population from outsiders and the elites. However, its usually the "elites" who benefit and every one else suffers. We need look no further than the U.S.A. and dtrump. the rich got the tax benefits, the working class is fast loosing their health care. the U.S.A.'s maternal and infant mortality rates are climbing. Post partum health care is declining as is infant health care.

Americans got what they deserved. Trump was clear about what he was going to do. the Brits ought to know by know what Johnson is up to along with his Conservative Party. its the rich and entitled who want more and they will get it at the expense of the working class. Boris will bring the country back to its living standards of post WW II. For any who want a quick look at that, have a look at Call the Mid wife on the Knowledge Network here in B.C. You can see how poor the working class of G.B. was. How crammed their housing was, slums, lack of food, etc.

The only people I feel sorry for in these cases are the children. they didn't get to vote for any of it

What is particularly amusing in G.B. is many of those racists who want "foreigners' to leave, don't understand all those people of colour they dislike, are British Citizens and aren't going anywhere.

Without the continued influx of educated Europeans, G.B. could easily fall into second world status, much like Russia and eastern bloc countries.

What's happening these days in Britian is self destruction, e.a.f. And, sadly, there are a huge number of citizens who approve of it.

They approve of it now because they think all those "foreigners" will leave and they'll have the jobs, houses, etc. What they don't understand, the majority of those "foreigners" are British Citizens. Those citizens who approve off all of this will be singing another tune when tbey don't have their health care, no work and no welfare. They'll be immigrating all over the world, like they did after WW II.

G.B. isn't the world power it once was and still hasn't grasped that fact. They were a world power because they traded, manufactured, and had a strong navy. today, not so much.

Johnson promises Britons a return to the Grand Old Days, e.a.f. If he gets his way, nothing grand will happen in the United Kingdom.