So What Was That All About? 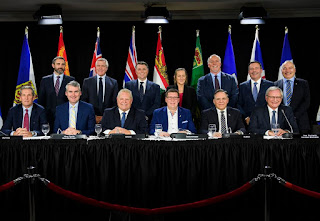 Yesterday, Canada's premiers gathered in Mississauga. Martin Regg Cohn writes that it was a strange meeting:

For a moment in time Monday, Canada’s premiers all pledged fealty to national unity.

No more disunity, not until further notice. They put their best faces forward collectively even if, as a country, we’re not much further ahead.

How did they achieve their new-found harmony? By putting their old discord on hold.

Pricing carbon? Not in this or that province.

Preventing religious discrimination? None of your business (if Quebec bans articles of faith for some, it’s not for others to weigh in).


They did, however, agree on one thing. They all needed more money from the feds:


And that, Ford says, is a sign of national unity. But Cohn is sceptical:

Without a voice, or a vision, the premier’s musings on national unity mean everything and nothing.


As Gertrude Stein once said of Oakland, California, "There's no there there."

Email ThisBlogThis!Share to TwitterShare to FacebookShare to Pinterest
Labels: The Premiers Meeting

Ford is clueless. The Raptors won the league championship this year, but Ford gave each visiting premier a Leafs jersey. This is a team that hasn't had a whiff of the Cup in over half a century! Legault must have felt like the boy in Roch Carrier's book the Hockey Sweater. I guess that booing at the Rap's victory parade really got to ol' Dougie.

Ford's trying to be diplomatic, Cap. But diplomacy isn't in Doug's toolbox.

.. what a great opp for grandstanding.. selfies .. posed group pictures..
All that was missing was Andrew Scheer & a few clingons..

Hell, then they could have done The Last Supper or a Fathers of Confederation shot
the national heroism, sacrifice, service and 'leadership' assembled all in one room..
deary me.. I thought I felt a tear forming.. but it was a happless fruit fly
Will contemplate the implications.. of the fruit fly & its origin.. what store & fruit
they get chilled and go static in rhe cooler.. awaken when brought home

Sorry, drifted off topic there.. ah yes.. The First Ministers..
Are they all like Kenney and Ford.. in lockstep to the das leader, Harper ?
Even Horgan ?

When one thinks that Ford is the voice of reason, we are all in trouble.

They were all smiles, sal. But I suspect there's a lot of turmoil under those smiles.

I agree, Mac. It's hard to buy the idea that Ford is the Great Moderator.

Owen, a little off topic, have you seen this article. Calgary Herald. Full of misinformation.

Shakespeare's Much Ado About Nothing seems as apt a description as any for this gathering, Owen.

I hadn't seen the article, Mac. But, given Morton's Reform Party roots, I guess I shouldn't be surprised.

Remember the comic book, Sad Sack? That's what came to mind when I saw this photo - a gaggle of Sad Sacks. Even our guy, Horgan, is a bit of a buffoon. I wonder how he's managing his LNG fetish now that Putin's gas pipeline to China is up and running?

Trudeau, pere, really opened Pandora's Box when he introduced these third-raters to the notion of "cooperative federalism." Prior to that they were treated as glorified mayors and were kept in their place.

Remember when we had premiers of the stature of Bill Davis, Roy Romanow and Peter Lougheed? It seems that as their perceived powers have increased, their calibre has declined.

They look like the Happy Gang, Mound. I'm betting they're not.

They all agreed the, provinces, wanted more money from Ottawa. OMG, what a riot. Do these idiots think there is a cash machine in Ottawa that Trudeau can access and just hand it out.


Note to the premiers. there is only so much money in Ottawa and it comes from the taxes of all of the rest of us in the country. If the boys say they want more money from Ottawa, what they are really saying is they want us, the taxpayers to pay more taxes to Ottawa, so they the premiers can spend it on what they want. If the premiers want more money, all they have to do is raise taxes in their own provinces. oh, right they don't want to do that because the taxpayers might vote them out of office.

Don't see why we need to give money to Alberta or Quebec, they both want to leave Canada. By Trudeau not sending money to those two provinces he is really actually helping them get ready for the day they leave Canada and have to go it on their own. Oh, they just are threatening, they don't really plan to leave.

As to the Premiers who carry on about western alienation, especially Alberta and
sask. NEWS FLASH. you are eastern provinces. Yes, there is B.C. and we are truly the only western province and we're good with the rest of the country and plan to stay.

If Alberta and Sask had saved a bit more money in the 40 year oil extravaganza, they wouldn't be in this pickle they are in. Remember no one seemed to interested in the 1970/80s when the B.C. forest industry collapsed and Vancouver Island established the first food bank in Canada.

Trudeau can just tell those premiers they can tax their own corporations to get the money they need. There is no bottomless pit in Ottawa. There are transfer payments for provinces who need it. why should NFLD. pay for B.C.s quest for more rapid transit and the billions it costs.

.. re the J MacDuff comment & link.. Though its a must read (with a proviso)
I believe its best read as presented by the capable Ms Garossino ..
segment by segment she rebutts it elegantly & with ease
Will seek that link out and add..

The Oil Boom was a good opportunity to put money in the bank, e.a.f. Norway did it -- and Norway is in good shape.

Thanks, sal. Context can make all the difference.