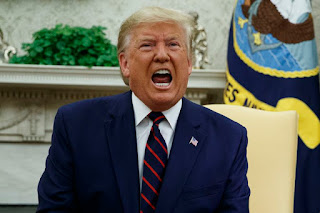 Donald Trump has finally let it be known how he really feels about Justin Trudeau. Erin Banco and  Asawin Suebsaeng report in The Daily Beast that:

The famously sensitive American president lashed out during a closed-door meeting at the White House with more than a dozen ambassadors to the United Nations present, according to three sources with knowledge of the gathering.

In doing so, he made a number of foreign officials noticeably on-edge and also upended a portion of the meeting meant to focus on world powers’ security cooperation, not personal gripes.

During this private airing of grievances, President Trump repeatedly denigrated the Canadian prime minister behind his back and called the French president a “pain in the ass” while referring to him as “short,” according to an individual who was present for the meeting. Trump also bashed the French leader for not doing enough to help in recent Iran negotiations.

Over lunch with the ambassadors, President Trump again addressed the video and went on a prolonged tangent, complaining to the diplomats about Trudeau and Macron, according to two sources briefed on the meeting. This lasted several minutes and was enough to derail the ongoing conversation about NATO countries contributing more money to security.

Another individual in the meeting told The Daily Beast that Trump’s comments made ambassadors present “visibly uncomfortable,” especially those whose leaders were involved in the hot-mic video. (The Canadian ambassador to the United Nations was not present at the meeting.)


None of this should be surprising -- just as the mockery of NATO leaders should be equally unsurprising. And how should Trudeau take all of this? After the late actor Paul Newman discovered he was on Richard Nixon's enemies list, he said he considered making the list "the highest single honour I've ever received."

Image: Chicago Tribune
Posted by Owen Gray at 9:15 am

Email ThisBlogThis!Share to TwitterShare to FacebookShare to Pinterest
Labels: Trump and Trudeau

I'm sure the Cons and their media mouthpieces will wail about the dangers of angering Big Orange Daddy. They can get stuffed. JT's been trolling Trump since their first meeting, when he gave him an old photo of Trump's grand daddy's Yukon whorehouse. Play on, JT, the rest of humanity approves.

The central problem is that Trump -- a pompous windbag -- has managed to intimidate all kinds of people, Cap. When he is unable to intimidate others, the wind will seep out of his balloon.

It's way past time people should start standing up to Trump. Instead of "looking uncomfortable", the ambassadors should have told Trump that what he was saying was inappropriate and left the meeting.

Precisely GDN. Trump has acted like this his whole life -- because people have let him get away with this kind of behaviour.

Apparently he has also lashed out against Greta Thunberg on Twitter, Owen. Notably, despite her angry tweet railing against the fact that son Baron was mentioned during the impeachment hearings, saying children should not be targeted, Melania is remaining silent on her husband's latest harangue.

I suspect that Melania's dealings with her husband involve financial calculations, Lorne.

At our age it can seem that life has been a succession of "it can't get worse than this" people and events. Just when you tell yourself you've seen it all, along comes the jarring realization that was wishful thinking.

Trump did not create the degraded circumstances, the septic field that propelled him to the White House. It was there just waiting for him or perhaps someone even worse. He has terrible instincts but he's an intellectual lightweight and very lazy. Imagine someone equally vile as Trump but without his drawbacks.

Life for many, perhaps most, is about to become much more difficult, more precarious. The disaffection that launched Trump will likely deepen. What then?

Is it possible there could be someone an order of magnitude worse than Trump already waiting in the wings? Can you be confident there's not?

I'm quite confident, Mound, that there are people as equally vile as Trump, but whose intellectual gifts are far superior to his. God help us.

He just hates Trudeau and Macron because they can speak to each other and he canèt understand them. Really who cares what dtrump thinks about the two leaders. Once again dtrump didnèt deal with the issues at hand.

Paul Newmanès line most likely applies in this case also.

Agree the ambassadors ought not to have stayed for the rant. Just excused themselves and went and did something else. They obviously didnèt get done what they were there for.

People might just start walking away from him when he carries on like he does. The man has mental health problems. what adult attacks a 16 yr old child because they got on the cover of time, instead of them. Like how infantile is that behaviour. Hes a joke, but they did give him the nuclear codes.

Let's hope that none the guys who write the term papers and provide the tutoring that all the little Trumps of the world require to get their college degrees are overcome by a sudden interest in a political career.

Good point, John. It took other ignorant and incompetent people to help Trump and his ilk to get where they are.