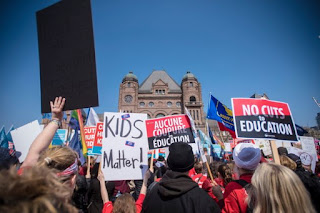 The Ontario Secondary School Teachers Federation has declared another one day strike for next week. Martin Regg Cohn writes:

A one-day strike in public high schools is a declaration of warning.

A second day is a declaration of war.

With this week’s province-wide warning shot, and next week’s targeted strike planned for Toronto schools, it’s tempting to conclude that Ontario’s Tories and teachers are fighting to the finish. Right down to the last student and parent in the province.


We've been here before. Back in the Mike Harris years, the premier -- a failed elementary teacher, who spent three years in the profession before he dropped out to become a golf pro at his father's golf course -- appointed a high school dropout, John Snoblen, to the Ministry of Education. Snoblen immediately declared that he was going to revolutionize education in Ontario. And the best way to do that, he said, was to "create a crisis." He proceeded to do just that.

And now we have another education crisis:

Yes it’s about budgets, because billions of dollars are at stake. But the undeniable reality is that this time, it’s not just about money but pedagogy.

The Tories have grudgingly admitted as much — by backing down on their pre-emptive moves against teachers which seemed designed to provoke the latest strike action. Even before both sides sat down at the bargaining table, Doug Ford’s Tories set it to blow up:

Ahead of negotiations, the government announced thousands of teaching jobs were out the window, thanks to four mandatory online courses for students (an untested innovation never attempted on that scale); and major increases in class sizes (an unwanted degradation that the government falsely claimed was welcomed by employers and parents).

In the ensuing uproar, Ford replaced his first education minister, Lisa Thompson, with rookie politician Stephen Lecce, who quietly walked back the regressive and provocative moves. But it was only a tactical retreat, in which the government tried to split the difference.

Instead of pushing average class sizes up by roughly six students, the government countered with three; instead of four online courses, it recalibrated to two. This wasn’t so much a concession as an admission of contrition for failing to think things through in the first place.

Lecce now complains the unions won’t meet him halfway. But if the government cuts its cuts in half, that’s not much of an improvement, as the opposition New Democrats keep pointing out. They have a point.

Reacting to the strike action, the government is casting teachers as money-obsessed: In fact, the Tories obsessed over money before talks even began, announcing a one-per-cent wage freeze across the public service (the OSSTF wants only a cost-of-living increase).


Teachers are asking for a 2% raise. Not unreasonable, considering that "the provincial government’s own statistics bear this out, showing the average collective bargaining increase in Ontario was 1.9 per cent so far this year — and even higher in the private sector, at 2.1 per cent."

No. What this is all about is what it was all about twenty-five years ago: In Ontario, the uneducated are waging a war on education.

Image: HuffPost Canada
Posted by Owen Gray at 9:02 am

Email ThisBlogThis!Share to TwitterShare to FacebookShare to Pinterest
Labels: Ford's Attack On Education

I can't say I'm surprised, after all Ford ran on Common Sense Revolution 2.0. I'm just amazed that Kenney beat him to the second front in CSR, which is the attack on nurses. Kenney's already announced that he's cutting 750 nurses (500 FTE) out of a stressed healthcare system. Ford's really slipping up on the job of putting women in their place.

Conservatives -- the gift that just keeps on giving. Doug removed the Progressive from the provincial party just by standing there looking sleek, missing just a fat cee-gar as a prop for a boss with a waistcoat and suspenders. Doug Ford, open for business with a cowed caucus ready to stand up and sit down at his whim. From afar down here in the Maritimes I can say nobody dressed like that with slicked back hair, a permanent fake grin of self-satisfaction and a sweaty swagger would have a look in as a pol. I mean, how observant does a person have to be to pick out a sleazebag who resembles a '50s Las Vegas Casino owner from Hollywood Central Casting?

Boy, I do not envy the lot of Ontarians. They made a stab in the dark electing Doug, and in return he has turned around and screwed the lot of you. Abandoned projects so cancellation fees have to be paid out, having even a US Public Utilities Commission turn down Ontario Hydro's application to buy a utility due to likely political manipulation. What do you think they saw? A self-interested blowhard in all likelihood, likely to, shall we say, dabble. He wants the populace to be as ill-informed and uneducated as he is, presuming then they'll see things his way and despise anyone with knowledge and a job with a pension that they don't have. I mean, it's been crap over boomer week for a couple of years already. Who needs good schools? We don't need a whole new passel of well-educated kids not willing to toil for minimum wage, he must think. Think of all the money they'll demand! And that'll spoil his slogan of Ontario open for business where the wages are low and the people are happy with slurping buck a beer and jobs with no bennies.

I dunno. Good luck to you and all of us because Ontario is 40% of this country. And we all have an even greater peril to face. Jason Kenney. An intelligent and cunning self-interest seeker - the Unctuous Voice of Doom for the general (obviously wildly overpaid if you're a brainwashed Con) public toiling in AB's public sector. He'll ousource everything to privateers who'll pay even worse and pocket the difference while offering zilch pensions - what the employees have now has been seized to invest in tarsands. Reality is worse than Orwell. Dissemblers both, Ford and Kenney, not builders of social trust but builders of projects that require investor capital and a fancy return. Good to be friends with those people if you're a Con leading light. Who cares about the stupid losers who elected them? That's the coldness of these pols who are just in it for themselves. Good luck to the teachers.

Spot on, BM. Dissemblers both. Now the piper will be paid. These are not easy times.

4 on line courses you say. what about students who don't own computers and parents can't afford internet? do it at school they say? well what if there isn't time. In my opinion, this is all about privitization of eduction. If you have a look at what Betsy DeVos has done in the U.S.A. and is doing, you'll see this on line junk is an American move. By moving courses and the entire education of a child onto on line, there is not only a declining need for teachers, but rural schools.
the land these schools sit on can then be sold to their developer friends. On line education can never replace class room learning for children. School is much more than simply absorbing information. Its about learning to work and play in the world around you. children who are only educated on line or in home, frequently don't have the skills to develop as mature functioning adults who can inter act with others in a team.

If we look at what Americans have done to public education over the decades and then look at how their society has developed other problems, well that is what Ford and the Cons have in mind for Canada. Poorly educated people can not make informed decisions. If you have a look at states which have poor public education, you will also find unemployment and poverty.

Its not about the money, its about bringing in private education and such lovely things as "charter schools". Any one can set them up in the U.S.A., not even have a campus, collect the money from the government and then leave, closing the doors, delivering nothing.

What Ford is doing has nothing to do with saving money and everything with producing an ill informed public under class.

Some of us in B.C. are looking forward to all those laid off nurses from Alberta coming to B.C. and I'm sure the laid off teachers of Ontario will enjoy B.C. Housing is more expensive in the lower mainland and Greater Victoria, but the weather is much warmer in the winter. We're short teachers and health care professionals.

Those who voted Conservative now can learn to live with the results or die because of them. Welcome to the world of dtrump

Ford is on record as an admirer of Trump, e.a.f.

of course, he is just as vain, stupid, ignorant as dtrump. the voters of Ontario got what they deserved/voted for. I'm just sorry children are the victims of it all.

We all have to pay for our mistakes, e.a.f.