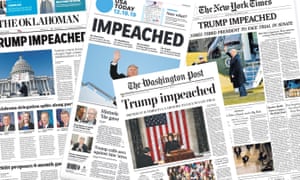 Yesterday, Donald Trump was impeached. Listening to the logical fallacies the Republicans were spouting, it's clear that madness has descended upon at least one of the political parties. But, Gail Collins writes, things could get nuttier:

The scariest thing about the whole process has been the president’s absolute, total inability to handle it like a sane person, let alone a sensible politician. On the day before the impeachment vote, when reporters asked Trump if he accepted any responsibility for what was happening, he did not say, “I just wish I could have been clearer about my total dedication to the country’s welfare.” He said: “No. I don’t take any.”

The events leading up to the House’s big day were a pretty good example of how out of control the president has become. He sent a loopy six-page letter to Speaker Nancy Pelosi, attacking her for saying “I pray for the president.” (“It is a terrible thing you are doing but you will have to live with it, not I!”)

In the impeachment vote run-up, Trump also tweeted that Pelosi’s “teeth were falling out of her mouth.” We are not going to discuss the state of the speaker’s teeth, which appear to be fine. And you cannot let him pull you into this kind of rabbit hole. It’s nasty to make fun of politicians’ personal appearance. Next thing, you’ll be talking about people’s hair and deeply artificial skin color.


Trump has been impeached. The man who loved to plaster his name on all kinds of things -- buildings, wine, a "university" -- now has a historically dirty name.

But he's still in office. And the madness will continue.

Image: The Guardian
Posted by Owen Gray at 8:21 am

The Republicans are making a spectacle of themselves but they have no choice. You simply cannot defend debased lunacy with sane rhetoric. Can't be done. To defend Trump you have to go where Trump is - out on the fringes of reality. Only there can you spout the utter nonsense needed to vouchsafe for him and impugn the Dems.

It's part and parcel of their Faustian pact. It's either abandon their integrity, debase themselves or face the rage of Trump's base who are even more detached from reality than their beloved leader.

The dynamics eerily resemble the means that have kept the Kim family in power for more than 70 years. Few realized it at the time but when Trump boasted he could stand in the middle of 5th Avenue and shoot someone and it wouldn't cost him a single vote he had the measure of his flock.

Trump is about to use this to deepen the rift in America as though it wasn't already strained to the breaking point. The Electoral College no long reflects the popular will. The Senate now uses the imbalance of small, white-state representation to transform itself into a bastion of white privilege. Democracy, never particularly robust, stumbles. Perhaps Hedges is right, America is in a pre-revolutionary moment.

This may, indeed,be the moment where a new kind of civil war breaks out, Mound. A friend of mine has just finished the book, A Warning, by that Anonymous insider. He sent along this passage:

“Speaking to a group of Civil War veterans in 1875, Ulysses S. Grant speculated that if ever the nation were torn apart again, it would not be split North versus South along the infamous Mason-Dixon Line, the geographic boundary that separated free states and slave states. He surmised that in the future the dividing line would be reason itself, with intelligence on one side and ignorance on the other. Grant was a student of history. He knew that societies where truth comes under attack, the fertile soil is tilled for violent conflict. Austrian philosopher Karl Popper took it a step further, writing, 'The more we try to return to the heroic age of tribalism, the more surely do we arrive at the Inquisition, at the Secret Police, at a romanticized gangsterism,' a horrible degeneration that begins with the push of a domino-

'the suppression of reason and truth.'”

What gets me is that Trump's supporters seemed not to realize that he was insulting them when he made the crack about shooting someone. I suppose many of them can be excused for overlooking the insult because they'd already invested in one his hats. The ones who hadn't done so have no excuse.

Ordinary Americans once knew that a rich man -- Franklin Roosevelt -- was on their side, John. Now they think that, because he's constantly enraged, Trump is their friend. They couldn't be more wrong.

John B: dtrump's supporters don't see it as an insult. Remember they love their guns and dtrump is saying what they would like to do, kill some one they don't like. they love him for that comment. Its much in keeping with the states which have the "stand your ground" laws. what they are all about is whites being able to shoot people of colour at will

Agreed, the country could well divide along lines of ignorant and knowledgeable. Perhaps that is why dtrump is constantly threatening and attacking California.

dtrump has been impeached. its is most likely the first time in his life some one or something told him": NO and he couldn't do anything about it and like a toddler, he is having a temper tantrum and calling people names.

The Republicans will continue down this road and it will end badly. dtrump has stacked the courts so "justice" will be denied and the Constitution violated. Lets see which state will pull out of the Union first.

Pelosi has announced she isn't sending the case to the Senate yet. Am wonder if she is in "negotiations' with a few Republican senators to get them to vote with the Democrats to have a couple of witnesses testify.

You gotta love George Conway right now and his new name for dtrump instead of POTUS, is IMPOTUS. Conway's new PAC is going to be "fun" to watch. Too bad Colbert will be on vacation until next year.

My concern for conflict in the U.S.A. is if American refugees start coming into Canada and Mexico. Remember they have 340 Million people living there and should there be conflict at least a million or two will leave. We aren't ready for that one.

It's hard to predict how this will play out, e.a.f. When insanity goes viral, no one can predict the outcome.