A Foolish Mission From A Foolish Prime Minister 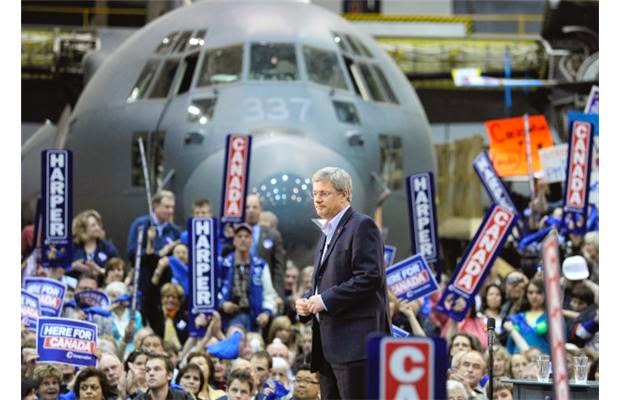 After the Conservatives vote this afternoon to go to war, we will enter the annals of historical folly. Dishonesty and folly are Stephen Harper's hallmarks. They are present in everything he does. But his entry into Iraq is truly foolish, for several reasons. Michael  Harris writes:

When Steve made his war announcement against the beheaders, there was a strange addendum.

Although Canada would join the noble bomb-fest in Iraq, there would be no bombing in Syria without the permission of the leader of that country.

But the leader of that country is the same monster Steve wanted to bomb only a few months back. Remember that guy, the one who used poison gas to kill his own people? Hundreds of thousands of Syrians have died in that country’s civil war. So why does Steve need the permission of the monstrous President Assad to save Scarborough from ISIS?


Besides the problem of asking his enemy's permission, Harper has created the problem of bombing people who could be his allies. How does he propose to distinguish between enemies and allies:

And then there is the small difficulty of identifying who to drop the bombs on. For years, a deadly civil war has been raging inside Syria to topple President Assad. Many factions are involved in the fight, including some that are backed by the United States, and others that are mortal enemies.


Michael den Tandt writes that this is Harper's Churchillian moment. But there is a big difference between Harper and Churchill. Churchill was no fool.

It's no surprise that harper tosses Canada into war without any democratic discussion, as if he's a king.

harper's only passions are his hatreds and he very much hates democracy.

harper pretends that there's not the slightest bit of money available for anything that he doesn't like (such as an inquiry into missing and murdered First Nations women), but he's got money to blow on a symbolic air campaign in Iraq.

That's all this is going to be. harper will have our jets fly around making a few air-strikes, doing some surveillance, and etc. Military analysts have said that none of this is going to stop ISIS. That will require boots on the ground. That will mean yet another guerrilla war that would drag on inconclusively for years.

harper will find the buzz among voters for action against ISIS will dissipate rather quickly.

This is all pretty Aline in Wonderland stuff, though actually, it reeks of people who used Catch-22 as a unser's manual. It also reminds me of reading Barbara Tuchman's March of Folly and finally discerning that the case studies, while about nations acting contrary to their national interests, were actually cases of nations working for the narrow self-interest of the forces behind the governments in question.

And, this time out, thwap, he has no support on the other side of the house. He'll be left to twist in the wind.

There's money to be made in a war, Danneau. And Harper's clients are those who -- first and foremost -- want to make money.

The Highschool War, all of our friends are going to be there, and many of our enemies are now our friends.

This isn't about friends or enemies, Steve. This is about Harper's adolescent need to project power.

All Harper cares about is, being a big shot on the International scene. He sees himself as, this powerful energy King and the world must bow down to him. Harper is rabid to have, all of that power and glory. All Harper ever manages to do is, look a fool.

Besides which, no-one asked Harper to take a bigger role in the war with ISIS, even if he said they did. As for boots on the ground? We know just how Harper treats our WW2 veterans and our Veterans of to-day.

His dream is to be commander-in- chief, Anon.

He likes to see himself as a general.