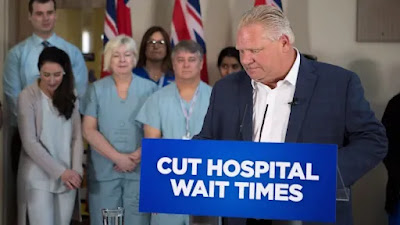 With our health-care system reeling, Ford is charging ahead with plans for further privatization — Ontario health care is already 40 per cent private — and selling this as a way to save the system through “innovation.”

This is just silly corporate-speak. The system’s problems have been thoroughly studied by countless commissions and the solutions do not involve privatization.

Certainly Ford’s plan to allow private medical companies to perform surgeries, paid for by government, isn’t the way to solve the medical backlog.

Ford's key maxim is that the private system works better than the public one. But that maxim doesn't apply to healthcare:

Ontario has lots of unused hospital operating rooms, idled after years of cutbacks. Instead of bringing them back into use, Ford plans to divert public dollars to private facilities. But these private companies will take 10 to 15 per cent in profits and pay high management fees, so they’ll cut corners to the detriment of patients.

That’s what corporations do — they devise ways to maximize profit for their shareholders. That’s their mandate, their reason for existing.

And when they’re allowed access to the public trough — where payment is assured and they don’t have to worry about competition — they’ve hit the corporate sweetspot. For all the hoopla about the rigour of the private sector, what businesses actually seek is a comfortable niche in a competition-free zone with a reliable source of revenue. Thank you, medicare!

It's called Disaster Capitalism. Milton Friedman proclaimed that situations  such as the ones we currently face are precisely the time to implement "market solutions."

And Dougie is just the man to do it.

Email ThisBlogThis!Share to TwitterShare to FacebookShare to Pinterest
Labels: Ford On Heathcare

Every government, corporation and private citizen will capitalise on a crisis. Ford put the healthcare system in crisis by making it possible for doctors to embrace the phone in appointments. If you can get a representative on the phone to even get an appointment. Doctors and walk in clinics were telling everyone to stay at home or go to Emergency if you have a problem. This system under Ford has gone completely for shit under the guise of pandemic management. The foolish people of this province gave this guy a majority and the mandate to walk all over our benefits.In the immortal words of mencken "We get the government we deserve and we deserve to get it good and hard"

I agree, zoombats. This was entirely foreseeable.

What would the price in kick backs be to Ford?

An interesting question, Unknown -- which I can't answer.

It is the same here in Berta (not a spelling mistake) and to my disgust Newfoundland and Labrador…..so much for a
Prov Liberal Government slowing the rest of the country what needs to be done to save Canadian Health Care. As the stomach turns. Anyong

Anonymous Anonymous said...
What would the price in kick backs be to Ford?

Wait for it, Mike Harris is getting long in the tooth and very rich from being Chair of Chartwell and other Boards, he is warming the seat for Doug.

The entire national healthcare system is on the edge, Anyong. And privatizing it won't fix its problems.

Like Mike, Ben, Doug will find a comfortable seat at the big table.