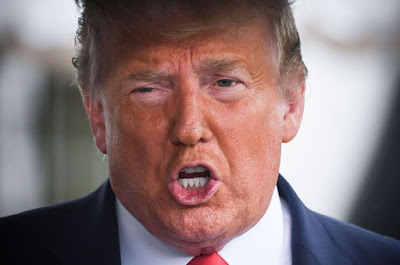 Donald Trump has almost always escaped the consequences of what he has said and done. Michael Harris writes:

Donald Trump has always been too rich, too powerful, and too lawyered up to ever get the comeuppance he richly deserves for a lifetime of lying and cheating.

The most recent example was the decision by the Manhattan District Attorney’s Office not to prosecute him for alleged tax fraud, even though Trump’s former personal lawyer, Michael Cohen, laid out exactly how it had been done.

As a result of putting the investigation on ice, two top prosecutors involved in the investigation of the Trump organization resigned. It’s hard to work in a place where you can smell a rat, especially when you are supposed to be in the truth business.

This time around, the evidence of Trump's crimes would seem to be insurmountable:

Americans now know that Trump knew about the deadly threat to hang Mike Pence. Did he step in? Did he call his own vice-president, who came within 40 feet of the rioters out for his blood? Did he call in the National Guard, the Defense Departent, or his attorney general? Did he make a public appeal for the rioters to go home?

Another thing Americans now know is that Donald Trump was well aware that he had lost the election, but refused to listen to anyone, including his own White House counsel, who told him that. He also refused to make any public statement until it became clear that his coup was not going to work.  Even his own daughter begged him to stop the violence. He kept watching television, taking time out to send out a tweet calling Mike Pence a coward.  That put a target on the VP’s back in the middle of a riot.

Most importantly, people died as a result of the riot that Trump fomented. So, is this it? Will Trump finally be held accountable?

Don’t bet the farm on it. For one thing, Americans tend to mythologize the presidency, and hence the person holding the office. Call it the divine right of commanders-in-chief, or presidential infallibility. Richard Nixon put it best when he said that if your president does it, it isn’t a crime. Trump is still, to some extent, clothed in the same aura of office that persuaded Nixon he was above the law.

Trump also has the advantage of the clock. With criminal investigations underway both by the Department of Justice and at the state level in Georgia, it is doubtful if any of these investigations would be concluded before the mid-term elections, let alone any legal proceedings.

If the Republicans win back the House of Representatives on Nov. 8, as most pundits are predicting, not only will the Jan. 6 Committee be disbanded, some of its members may find themselves under investigation by vengeful members of the GOP.

The last thing in Trump’s favour is pure politics. Remember, this is a one-term president who survived two impeachment trials because of partisan support in the Senate. Should Trump officially announce his bid for a presidential run in 2024, it could have a chilling affect on those who might otherwise be willing to indict a former president.

Tennessee Williams' Blanche Dubois claimed that she relied on the kindness of strangers. Trump relies on the cowardice of many. This is an existential moment for the United States. If Trump is not convicted for what he has said and done, the Americans will lose their republic.

"If Trump is not convicted for what he has said and done, the Americans will lose their republic."
Consider it gone.
The legal system never was involved with truth or justice.
It was merely a man made codification of protections for people with things against people without things with an hourly rate.
Best lawyer/most money wins
Real laws (laws of nature) are ignored or out lawyered- welcome to environmental disaster.
Your morality may stay intact when no money is involved.
It becomes the old "we know what kind of girl you are honey , we were just negotiating a price"

There are lots of examples of injustice, lungta. I keep hoping -- perhaps foolishly -- that Trump will get the knockout punch he deserves.

Once the privileged are challenged no matter what political party ; they will circle the wagons to protect what they have.
The Magna Carta changed nothing!

The wealthy assume that wealth immunizes them from accountability, TB.

What's so alarming in all of this mess is that the US is a short 98 days away from a reckoning that will determine its future. If Repugs win back control of congress, all bets are off- Biden and Harris impeached and convicted, house speaker becomes president and then the next decade or so is spent exacting revenge. Not to mention Trump- who would've conceived a few short years ago that a fraud of this level would bring the country to its knees? I'm in the camp that he walks completely free of any consequences, but at the same time, I don't think he's all that long for this world and will not survive another presidency, but by then, the damage is done and the country is but a pale shadow of its former self. BC Waterboy

If Trump gets in for a second term, waterboy -- even if it's not a full term -- the country is finished.