He's Heading For Lots of Pain 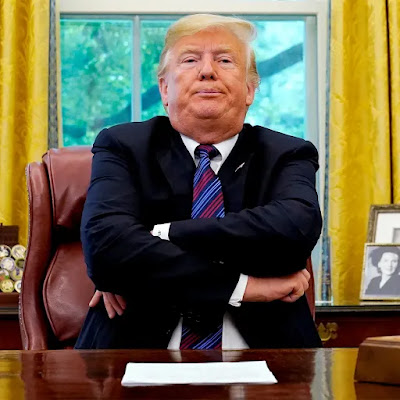 It's been a tough couple of weeks for Donald Trump. After the FBI retrieved government documents from his home, things got steadily worse for Trump. The New York Times reports that Trump was keeping over 300 documents in his basement. Jennifer Rubin writes:

The sheer number of documents previously recovered and their sources (from the CIA, FBI and National Security Agency) raise the stakes considerably for Trump, undercutting his followers’ frivolous excuses and ludicrous accusations of an FBI plot to persecute him.

Even more incriminating, the Times reports, “Mr. Trump went through the boxes himself in late 2021,” meaning he was clearly aware of the contents and could view the classification markings. If the FBI and Justice Department are looking for evidence of Trump’s direct knowledge of the materials and willful refusal to return all of them, this would fit the bill.

If, contrary to what Trump’s counsel said, the government did not previously get back all sensitive materials, the only logical conclusion would be that Trump refused to part with documents he falsely told aides were “mine." This might be the rare case when Trump lacks even a hint of plausible deniability (e.g., the ability to shift blame to his attorney).

If the facts are as damning as they appear, Trump’s risk of indictment is quite high. After the evidence is gathered, Attorney General Merrick Garland will need to decide whether to pursue an indictment from the grand jury. With a discrete set of facts that a jury can easily comprehend, powerful evidence of Trump’s willfulness and the clear interest in protecting the nation’s secrets, Garland will have every incentive to proceed — and surely not wait until the exponentially more complicated Jan. 6 investigation concludes.

And there are other indictments pending -- in New York, Georgia, and DC. There are consequences for fervently believing that you're the smartest guy in the room, particularly when you so obviously aren't.

I think the real issue is if "Washington" wants to really indict a former president. It might be a bit like declaring "open Season" on any number of senior politicians and those weird, politically appointed bureaucrats the US has.

Trump is an outsider so a desire for revenge or just straight dislike of the man may lead to a prosecution.

In British reporter Chris Ayres’s memoir War Reporting for Cowards, he describes the arrival briefing he got from the woman he was replacing as New York correspondent of the London Times: “‘Lift and view, Chris, is what we do here … We lift from the New York Times.’ She held up the copy on her desk. ‘And we watch the news.’ She pointed to CNN. ‘We lift … and view. If you get the hang of that, you too can be a foreign correspondent’.”

As a description of how even prestigious media organizations work, it’s very revealing. Research indicates that the vast majority of English-language media stories are taken, almost word for word, from just two sources: a handful of press agencies (primarily AP), and government or corporate press releases. The existence of a large number of media outlets might lead us to believe that we are getting a wide variety of takes on world events. In reality, no matter what we read or watch, we mostly get the same few stories told in exactly the same way. This is especially true of foreign affairs, as the number of Westerners working as foreign correspondents is extremely small.

Thanks for the link, jrk. I suspect that Trump's need for revenge has cultivated a similar reaction on the other side.

.. I’m currently ‘looking at ‘Media’ as a very strange ‘creature’
Since Marshall McLuhan is one of my Patron Saints.. it’s easy to parse certain Words & Terms.. that Hunter S Thompson is another Patron Saint, as are George Carlin & Alfred E Neuman means there’s a certain ‘flavour’ to my views of Mainstream Media & Social Media. I don’t use the word ‘News’ much anymore.. and the ‘The Slant’ is apropos in my view. I recall when I was a ‘Pinball Wizard’ there was a thing called ‘TILT’ & the art or artifice was how much you could get away with before the machinery declared ‘TILT’ and your game was over (insert money - time)

Also, an old friend from Montreal once said ‘out of the mouthes of babes, often comes Pablum’.. so that kind of sums up the aspect of regurgitation as ‘The Daily News’ .. He had a ‘way with words’ and he shoulda coulda - have become a ‘Journalist’.. Remember them ? ‘They’re pretty much extinkafied’ as he used to say in that laughable ‘habitant’ muddled patois.. He called me one morning and told me ‘Billy went to sleep and woke up dead’ so you can kinda see how he & I now consider what it can mean to be ‘WOKE’.. Did Journalism fall asleep & wake up dead ? I always though one needed that hoary old thing called ‘Ethics’ to be called a ‘Journalist’ or a ‘Public Servant’ .. especially an ‘Elected’ Public Servant.. 🏴‍☠️ 🦎 🏴‍☠️

I suspect that Trump's need for revenge has cultivated a similar reaction on the other side.

Very true but my speculation is correct, on the Trump side, there are not a lot of Washington insiders to be threatened. To some extent they can do all sorts of things because it does not threaten their career paths or their children's acceptance at Yale.

As I recall, there used to be a strict ethical code for journalists, sal. Ben Bradlee was a brilliant practitioner of that code. You can imagine what he would say about Trucker Carlson.

Unfortunately, all too true, jrk.

Hardly a day goes by in the US media without another Trump Bombshell. Indictments here, indictments there, trouble everywhere. The sad truth is that he remains the most powerful m-fu**er in the country. He has total control over the media narrative and has a stranglehold on the sanity of perhaps 100 Million plus people and amasses a fortune from their stupidly handing him free money. Biden, while not the most charismatic president continues to get things done with barely a notice when all the oxygen is wasted on Trump. Despite all of the noise over the "trouble" he's in, I don't buy for a second that he spends as much as one night in prison (where he so desperately belongs) and perhaps even comes through with an electoral college victory or within a hair of the Oval Office again. My money is on he meets his maker in the next couple of years or so, and no, I'm not talking prison, but a special plot beside his ex wife at the golf course. BC Waterboy

"my speculation is correct"

then it is not speculation ~ the oxymoron patrol ;-)

I suspect that jrk forgot to add that little word "if", PoV.

Perhaps Trump will meet Macbeth's fate, waterboy. Both Macbeth and the audience didn't see it coming.