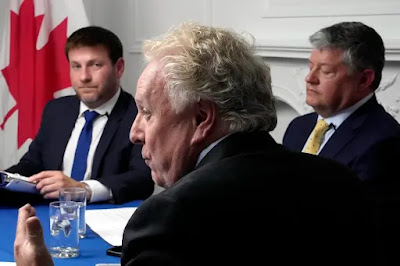 Jean Charest tried to make the case last night that he is the best person to lead the Conservative Party. Althia Raj writes:

The former Quebec premier and current Conservative leadership candidate hoped Wednesday’s third official debate would introduce him to more members and boost his chances of winning the party’s Sept. 10 contest, but his relatively calm performance may have failed to make the case that the perceived front-runner Pierre Poilievre, would be a disaster for the party and the country. It wasn’t until the final closing arguments — 25 minutes after a French exchange — that Charest got to the point.

He lambasted Poilievre — without naming him — for failing to show up and be accountable to members. He contrasted his values and numerous policy proposals — supporting law and order, introducing more private health care delivery and replacing the consumer carbon tax with a tax on large emitters — to his opponent’s offering.

“Anger is not a political program,” Charest noted. “A slogan isn’t going to do the job for us.”

In a scrum following the roundtable exchange, Charest pointed to recent public opinion surveys by Ipsos and Angus Reid which suggest he has a better chance than Poilievre of winning across the country.

“There is a boulevard out there of Canadians who want a fiscally conservative government that’s going to have a real economic plan for the country,” Charest stated.

But what Charest failed to mention is that those polls also suggest the majority of Conservatives want Poilievre to lead them.

Charest finds himself in the same position that Donald Trump's challengers faced back in 2015. When a political party is taken over by the crazies, wisdom and common sense are locked away in the closet.

Email ThisBlogThis!Share to TwitterShare to FacebookShare to Pinterest
Labels: Charest Tilts At Windmills

Introducing more private healthcare delivery doesn't reflect wisdom or common sense. The way to ensure the best healthcare for everyone is to make sure the rich can't opt out and pay to receive better and speedier treatment. There's already a huge healthcare staffing shortage, which would simply be exacerbated by privatization. Charest just demonstrates that even moderate conservative policies are bad for society.

I agree, Cap. Charest isn't a radical. But he's still a conservative.

Doesn't anyone in government know, healthy Canadians lead to a healthy Canada. This equals less health cost and everyone is treated the same, no preferences. For example, some countries charge the same ticket price for attending live performances and they are well attended. Anyong

The problem is that we don't like that kind of pricing, Anyong.

“We don’t like that kind of pricing”. What does that mean Owen? The rich do not want to stand behind the lesser? What ? Cap has an excellent comment too. Anyong

Unfortunately, Anyong, we live in a society where all kinds of us think that, if we all have to pay the same price, we all have to sit in the cheap seats.

Donald Trump's challengers faced back in 2015. When a political party is taken over by the crazies.........

And the crazies won the day an continue to destabilise politics.
Don't underestimate Poilievre, we live in the age of crazies.

Unfortunately, that's all too true, TB.