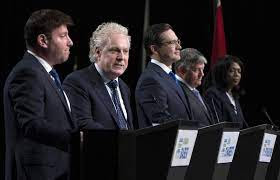 No audience, no podiums and appearances from only three out of the five candidates running to lead the federal Conservatives.

These are the circumstances under which the party's last official debate of the race will take place tonight in Ottawa, before a winner is announced Sept. 10.

Those participating will be ex-Quebec premier Jean Charest, rural Ontario MP Scott Aitchison and Roman Baber, a former provincial legislator who Doug Ford booted from caucus over his opposition to COVID-19 lockdowns.

Rather than standing at individual podiums, the three will be placed around a table for the event, which is being billed as part debate, part roundtable.

Moderated by the party's president, the event will be split into two 45-minute rounds. Candidates will answer questions in English during the first section and then switch to French for the second half.

While Charest applauded the party's decision to make the event bilingual, doing so no doubt poses a challenge to Aitchison and Baber, who are not fluent French speakers.

But even more significant than the format is the fact that neither Leslyn Lewis nor Pierre Poilievre will be there:

The party's decision to organize a third debate after two official ones were held in May drew sharp criticism from some in the party, including the two candidates who have decided not to show: Pierre Poilievre and Leslyn Lewis.

Poilievre's campaign issued a sharply worded statement after the party made the call.

It said the longtime MP and perceived front-runner of the race was going to stay focused on getting members to fill out their ballots, and slammed the earlier official English debate as an "embarrassment" for asking candidates personal questions about their favourite streaming shows and music.

Lewis's campaign informed the party last week she wouldn't attend, saying despite trying to find out more details it lacked details around format or questions.

All this indicates that the Conservatives still haven't got their act together -- and they still haven't figured out why they lost the last two elections.

The CPC has clearly lost its way Owen, now that catering to the Freedumbers is more important than actually positioning themselves as the governing party. So far it appears that only Charest had the courage to distance himself from what is actually a minority of potential voters. Poillevre has positioned himself as the winner, endorsed by Harper himself, and demonstrates an extreme hubris in thumbing his nose at the party apparatus, the trumping figure who thinks he owns the party. While in all likelihood it is a foregone conclusion that he will win, and maybe do better than the last two in Federal matchups, Canadians as a whole will not buy his schick and any increases he gets may come from a small percentage of non-voters or PPC looking for something more tangible. Either way, the whole process stinks and is unwatchable because who really cares what these three think when PP has it in the bag, supposedly. BC Waterboy

There's no incentive for a front-runner to take part in a late debate and Skippy has probably made the right decision by sitting out this round. If the party were truly committed to debates, the penalty for missing one would be instant disqualification. But a Con leader has to show they're into cheating and gaming the system, so expect a snoozefest tonight.

Poilievre is Arrogance personified, waterboy. And, in the end, that will not win the election.

Poilievre calculates that the format turns off viewers, Cap. He doesn't understand that the entire party is a turn-off.