They're Still With Us 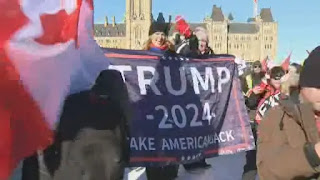 Deputy Prime Minister Chrystia Freeland has responded to an incident of verbal harassment in Alberta after video of the encounter was widely circulated on social media.

The video, which was shared on Twitter, shows a man and two women waiting at the lobby of Grande Prairie, Alta.'s city hall when Freeland and her staffers enter the building and approach the elevator.

What follows is a barrage of insults and swearing from the man, calling Freeland a "traitor" and a "f---ing b----" as she steps into the elevator.

"Get the f--- out of this province!" the man can be heard yelling, while another woman tells her, "You don't belong here."

Freeland was born in Peace River and she went to high school in Edmonton. On Saturday, she responded on Twitter:

"What happened yesterday was wrong," she said in a statement posted to Twitter. "Nobody, anywhere, should have to put up with threats and intimidation."

"I'm proud to be from Alberta," she said. "I'm going to keep coming back because Alberta is home."

The morons are still with us.

Email ThisBlogThis!Share to TwitterShare to FacebookShare to Pinterest
Labels: Freeland In Grande Prairie

I have thought for a long time now that the state of the "human condition" has been steadily in decline. People are becoming desperate and in so doing are lashing out. Greed is more prevalent than ever and cruelty is on the rise. Blame the politicians, the gap between rich and poor or any of the other favourite reasons to make a point but it is just a ritual. Nothing has changed and the old adage of the "more things change the more they remain the same" rings true. We are all very medieval when it come down to it and the fact people like the neanderthal that verbally attacked the Freeland are allowed to behave like this reflects the state of decline.

We are capable of doing great harm, zoombats. That has always been true and is certainly true now.

That man was out of line. Freeland not only is from Alberta, displaying his ignorance, she is also the Deputy P.M. People don't have to like her if they don't want to, but they ought to restrain themselves from making fools of themselves in public.

Freeland was simply walking with collegues into an elevator. Its nice that we live in a country where a Cabnet Minister could feel comfortable enough to do this without a squad of armed people to protect her. The man who hurled the verbal abuse at Freeland might want to remember he lives in a country which gives him the right to voice his opinions in public. It is also the right of politicians to not be threatened in the manner Freeland was.