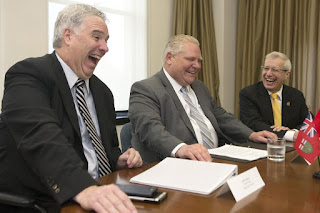 It's been a tough year for Doug Ford. He used to rail about Kathleen Wynne's government. Bob Hepburn writes:

Ford called the former premier’s handling of Ontario’s finances “the biggest government scandal in a generation,” accused her of “shady tricks” and suggested she and others in her government should be jailed for how they had run the province, which led to chants by his supporters during the election to “Lock Her Up.”


Now Ontarians are railing against Ford:

Now, barely a year into power, it’s Ford and his team who are at the centre of a major scandal and whose mishandling of day-to-day governing is so profound that it raises serious doubts about their competence.

Are Ford and his team corrupt or just incredibly incompetent? Or worse, are they a bit of both?


Clearly, the answer appears to be "both:"

The blame for much of the charges of patronage and incompetence lies at Ford’s feet.

To date, seven people have been dumped from their jobs in the current cronyism scandal, including Ford’s chief of staff Dean French. More to come? Stay tuned.

On the incompetence side, embarrassing examples emerge almost daily. This week alone Health Minister Christine Elliott was forced to set the record straight on Ford’s pledge last week that hallway medicine would be over within a year. Not so fast, Elliott said on Monday, it will take many more years than just one.


And, Hepburn reports, Caroline Mulroney hasn't been getting along well with her boss and his minions:

One minister high on Ford’s inner circle’s “bad list” is Transportation Minister Caroline Mulroney, who they apparently feel is no longer playing ball with them. Mulroney reportedly had some difficult interactions with French before he resigned, which Ford ignored when they were brought to his attention.


Some have suggested that there will be a mutiny in the caucus. Stay tuned.

Image: The Toronto Star
Posted by Owen Gray at 8:38 am

A mutiny in the caucus seems an unlikely scenario, Owen, given the craven complicity of people like Mulroney, Elliott, and Fedeli, none of whom, in my view, would have any credibility should they seek to replace Ford.

A good point, Lorne. The price of entry into Ford Nation is -- obviously -- integrity. Once you've lost it, you can't get it back.


Carnival politics. It resembles Theresa May's Tories only without the class.

It is a carnival, Mound, with its emphasis on the grotesque. And it's simply crude.

Geez, with all this fur flying, I would of thought Doogie would have brought in his big fan Kinsella as point man to put things right. A piece of cake for that guy. But, alas, it is not to be; Liz May has already scooped him up. Mac

Kinsella can be an effective political weapon, Mac. But Ford can be one, too. The difference is that Ford scores on his own goal.

Joining a mutiny is tough for the best of us. Joining in the initial stages is a virtual death sentence that may be deferred but never avoided by success of the project. Always be in mind of the Second Rule of the Empire. These guys? Forget it.

Your obervation is born out by experience, John. In the end, it's unclear what a mutiny within the Ford caucus would achieve.