He's No Populist. He's A Racist. 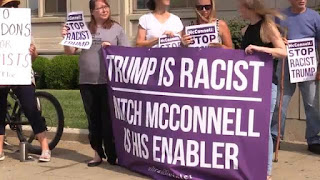 For nearly three years, the conventional wisdom has been that Donald Trump is a populist. His proclamations in the last three days prove that he's no such thing. Paul Krugman writes:

As everyone knows, on Sunday Donald Trump attacked four progressive members of Congress, saying that they should “go back and help fix the totally broken and crime infested places from which they came.” As it happens, three of the four were born in the U.S., and the fourth is a duly naturalized citizen. All are, however, women of color.

Sorry, there’s no way to both sides this, or claim that Trump didn’t say what he said. This is racism, plain and simple — nothing abstract about it. And Trump obviously isn’t worried that it will backfire.

This should be a moment of truth for anyone who describes Trump as a “populist” or asserts that his support is based on “economic anxiety.” He’s not a populist, he’s a white supremacist. His support rests not on economic anxiety, but on racism.


And it's not only Trump who's racist. The silence of his party proves that they are his collaborators. They, too, are racists. If you need  more proof, consider what happened last week in Tennessee:

Last week Bill Lee, the Republican governor of Tennessee, signed a proclamation ordering a day to honor the Confederate general Nathan Bedford Forrest, whom he described as a “recognized military figure.” Indeed, Forrest was a talented military commander. He was also a traitor, a war criminal who massacred African-American prisoners, and a terrorist who helped found the Ku Klux Klan.


And there is another facet to Trump's racism. He links it to crime:

I’m not sure how many people remember Trump’s inaugural address, which was all about “American carnage” — an alleged epidemic of violent crime sweeping our nation’s cities. He didn’t explicitly say, but clearly implied, that this supposed crime wave was being perpetrated by people with dark skins. And, of course, both Trump and the Trumpist media go on all the time about immigrant criminality.

In reality, violent crime in America’s big cities is near historical lows, and all the available evidence suggests that immigrants are, if anything, less likely than the native-born to commit crimes. But the association between nonwhites and crime is a deeply held tenet among white racists, and no amount of evidence will shake their belief.


There can no longer be any defending of the indefensible. Trump is, indeed, an ugly American. More than that, he is the incarnation of a very old American disease -- racism -- in all its ugliness.

Thank you for printing this article. Many of the msm won't and the more people who read it, the more who may have a chance to know the truth.

There are some of us who have known trump was a racist from the get go. For those who had any doubt, his racist comments are now part of the record and American history.

If any one still wonders how some countries went from being civilized to having mass murders now you know. What is happening in the U.S.A. and Canada was the start. the world didn't wake up one morning to find the Holocaust and Bosnia or Rwanda in full murder mode, no, it was a process and both Canada and the U.S.A. are in that process now. The U.S.A. is ahead of course, with their round ups, deportations, and concentration camps, but if we do not stop things, Canada will follow, slowly, more politely, but we will get there. Given the lack of negative response in the U.S.A. from leaders in business, the religious community and politicians we can expect the U.S.A to morph into a full Nazi type country within 2 years.

For those who think it doesn't happen that fast, the Nazi's invaded France 10 may 1940 and within 2 years their citizens were being shipped to the death camps. The Netherlands was also invaded by the Germans in 1940 and within one year only the Nazi party was the approved political party. By 1945 the war was over and millions, upon millions were dead. That is what happens when every one stands by and does nothing.

Remember, the Nazis sent everyone to the death camps, who didn't agree with them, so none of us will be exempt this time round either.

As some commentators have recently pointed out, e.a.f, we in Canada are not immune from the kind of nastiness that brought Trump to power.

"The things that multiculturalists believe will help people appreciate and thrive in democracy—appreciating difference, talking about difference, displaying and applauding difference—are the very conditions that encourage authoritarians not to heights of tolerance, but to their intolerant extremes."

And it's not just authoritarians and the intolerant. The politicians had to know that there'd be a flipside to their relentless exercises in ethnopandering. They won't sell one bowl of Post-National Flakes at the gut-wagons in the Etch Test. The slugs aren't buying and they're starting to think about some of the other stuff they were force-fed. Others might not, but I hesitate to label them on that account as racists.

"The longer they talk about identity politics, I got 'em. I want them to talk about racism every day. If the Left is focused on race and identity, and we go with economic nationalism, we can crush the Democrats."

Bannon feels that identity politcs provides authoritarian politicians with a made to order divide and conquer strategy, John .People claimed that Martin Luther King's emphasis on rqce would be his undoing. But his response to the authoritarians of his day was what made the difference. They lost the argument when they turned the firehoses on protesters.

How the Democrats deal with this will either make them or break them.

Democracy is a fragile thing that is easily destroyed by a 'leader' who wants to be a dictator, we saw it in Germany in the 40s, and elsewhere in other places across the world since. The Trumph regime has no interest in 'we the people' having any say in running the country, but for our electorate making the right choices come fall there goeth Canada....

We are at an existential moment, Rural. There are all kinds of forces these days seeking to destroy democracy. For them, it's simply inconvenient.

Its possible, the only thing to take down Trump
may be Robert Mueller and Jeffrey Epstein
It may be impeachment or a court of law
or he just dies in office.. so sad..

Chuck Schumer is right, sal. Melania and the GOP have made a deal with the devil.