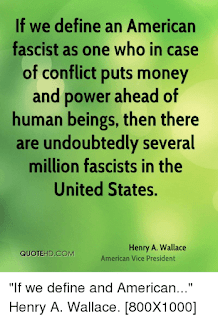 The Republican Party, Arthur Haberman writes, is a fascist institution:

Fascism is first characterized by a virulent nationalism, which is often either ethnic or racist. In the case of Trump, other leaders of the federal party, and many other members of the Senate and the House of Representatives, racist tropes are used all the time, most recently against several women of colour in the Democratic Party. Republicans are nationalist, whether it is “America First,” the insistence on the United States as the world’s greatest country, or in a belief in American Exceptionalism, something that sounds as though it is coming out of middle Europe a century ago.

Fascists attempt to neutralize the courts and take away the independence of the judiciary. Republicans have politicized the Supreme Court and the Republican-controlled Senate in the last few years has approved right-wing judges. who do whatever is bidden by the party, many of them found not competent to serve by bar associations.


Fascist governments have elections. But the elections are rigged. The Republican Party has worked very hard to rig elections in their favour:

Fascists like to have elections, which give the illusion of democracy. Some weeks ago the Supreme Court approved the idea that gerrymandering was constitutional. The decision was 5-4, with the two most recent appointees, Justices Gorsuch and Kavanaugh in favour. Both appointments are suspect — Gorsuch because the Senate refused to fulfil its constitutional duty under Obama; Kavanaugh because he was a clear political appointee who politicized his Senate hearing.


They glorify the military:

Fascists like military might and power, especially its display. The July 4 parade in Washington this year was a Fascist happening.

Fascists don’t like women who are politically active or aggressive. Fascism, as Virginia Woolf noted in the late 1920s, is a masculine doctrine. Women are supposed to be submissive and obedient. One of the ways Fascists display this belief is their attempt to control women’s bodies — males who pass laws to attack birth control and abortion.


They vilify and scapegoat minorities:

Unlike some Fascist parties, the Republicans need not invent the devil. It is the Democratic Party, Blacks and Hispanics, immigrants and refugees, much of the media. The federal Republican Party is a party of white racists.


All of the signs are there. And they're hiding in plain sight.

I don't disagree with your characterizations; however, I think it is the core Democrats who thought up the exceptional and indispensable nation slogan idea two decades ago - Hillary was always going on about "indispensable". It's worthwhile to read Michael Hudson's essay repeated by Canadian Dimension on ProgBlog yesterday. The whole world financial set-up since Bretton Woods is gamed so the US cannot lose and unless people understand the basics, they're flapping their gums needlessly on many issues that are fundamentally American and not attributable to either party - both exhibit the same bigheadedness and lordliness over other nations' aspirations. The Dems are agin Iran and so is Justin.

As for the chief meatballs in charge of the US, the UK and Ontario plus Goebbels Mark 2 out in Alberta and the minor idiotic dullard plenipotentiaries running Saskatchewan and Manitoba, I recently reviewed and read various articles on just what a sociopath is. Fits these unthinking illogical people to a tee. The societal consequence of their being in power is fascism, but nobody should be under any illusion that they're genetically out for themselves and normal rules of logic do not apply. They cannot see logic as most humans do unless it incidentally coincides with their own urges. So they lie a lot but cannot appreciate that they are. Worth having a gander at a couple of articles on sociopathy.

Thanks for the tip, BM. I'll have a look at Hudson's essay. I agree that the Democrats are not blameless. And the disease is not confined to the borders of the United States. We have our own autocrats.

Moreover, the disease has spread around the globe. It's also true that sociopathy is at the root of our current situation. In the end, when we pay no attention to our conciences, we get leaders who don't possess a conscience.

Owen, a book that left a lasting impression on me was Marshall McLuhan's The Medium Is the Massage. In that vein The Internet is the medium to watch. We now have children growing up under the influence of the Internet since birth and it is affecting the way they think.

"We are building the new neuro-anatomy of the human race. In the process we are destroying the human attention system, changing our idea of what it means to be human. The effect on our capacity for freedom and self-government is devastating, but not so bad for those who want to govern us. People are increasingly aware of the problem, but don't know what to do. In this talk, I explain how and why."

Thanks for the link, Toby. A short attention span is the enemy of thought. Donald Trump proves the truth of that assertion in spades.

It can feel like being a spectator at a slow-motion public hanging. We're aghast at what's happening but have a sense that it's already too late to intervene. Nothing can alter the outcome. Unable to divert our eyes to something better we just watch and wait.

It's a train wreck, Mound. And tunnel vision rules the roost.