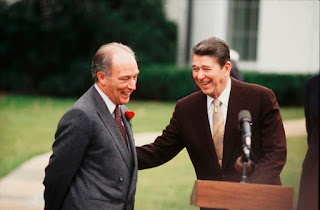 It could be that history is repeating itself -- or at least rhyming. Susan Delacourt writes:

Forty years before Justin Trudeau has been forced to contend with Trump and Johnson, there was Ronald Reagan and Margaret Thatcher — also transformative conservative politicians — and another Trudeau serving as Canadian prime minister.

Pierre Trudeau, like his son today, didn’t have much in common with the leaders chosen to head Britain and the United States, or with the brand of conservative politics that swept Reagan and Thatcher to office at the dawn of the 1980s.


There are differences, as Tom Axworthy -- who was a key advisor to Trudeau the Elder  -- points out:

Axworthy is cautious about seeing today’s U.S. and U.K. leaders as direct descendants of their 1980s counterparts. “Thatcher was extremely intelligent and articulate and Reagan was the greatest communicator I ever met in politics.”


But the parallels are unmistakable:

Pierre Trudeau clashed often with Reagan and Thatcher at international meetings — perhaps not as explosively as the Trump-Trudeau spat that burst into the open last year, but it was a constant tension in the early 1980s. Then, as now, when it came to global summitry, Canada found more congenial, progressive alliances with the leaders of Germany and France.

And with the U.S. and Britain acting as international conservative hawks in the 1980s, Pierre Trudeau spent some of his final term in office on an international peace crusade, after he’d finished patriating the Constitution and bringing a Charter of Rights to Canada.

By 1984, though, Trudeau, his peace crusade and much of his liberal resistance were swept aside. Canadians had gone from scoffing at Reagan and Thatcher to electing a prime minister who would be cosy with them — Brian Mulroney.


Who can say how it will all work out? But there's almost something Shakespearean about the irony.

Email ThisBlogThis!Share to TwitterShare to FacebookShare to Pinterest
Labels: The Rhymes Of History

.. Canada seems caught in some flailing fail.. and the USA deep in its failed flail..
So yes.. Shakespeare applies.. a tragic comedy
Certain politicians are awarded 4 year terms with seemingly no way to be summarily fired - short or no notice.. For failure to deliver legitimate Public Service.. ie whatever Trump, Doug Ford, Moscow Mitch McConnell, Jason Kenney seem to specialize in.. who even really knows what Justin Trudeau really thinks anymore.. its not what he says.. that's just the old 'fabrication for the nation' Gerald Butts style smoke.. and Andrew Scheer just has 'loser' written all over him.. hell, the Conservative party & Liberal party are sucking & blowing mightily for the Great Royal Harper PetroVision.. another recent humumgous Tar Sands 'announcement' right near Wood Buffalo National Park.. zero actual facts provided.. but lotsa smoke re billions upon billions of revenue for fed and prov government.. so that will be rubber stamped in (wait for it) October.. I'm waiting for Andrew Leach - University of Alberta to comment.. so I can actually get informed.. ie a glimpse of reality

What's wrong with these people ? Hell, what's 'right with these people? Are we unable to identify or find exemplars ? One would think, the pay and pension would be an incentive.. but somehow on his meagre pay scale and completely subsidized expenses, domocile - and everything under the sun.. plus future gold plated penision from his employers - US - Mr middle class Andrew Scheer is a multi millionaire.. never really had a real 'job' in his life.. yet has accrued almost TEN MILLION net worth.. with a brood of seven including himself. Seemingly has a bottomless election bankroll for daily smear, screetching, shallow fable, myth.. and chocolat milk, travel to every city across Canada to shout n snout about 'his vision' for Canada eh.. 'under his leadership' - Riddle me that. Almost a cool million per year in personal wealth piling up.. Overpaid never delivering.. in my view (not vision) that's some pretty astute stock market moves.. I had & have no idea that he is even close to that infallible with OUR money.. where do we imagine he got such good inside info to speculate with ??

All in all, it's a pretty dark picture, sal. Surely, we should expect better. But we keep producing the same brood -- albeit with different names.