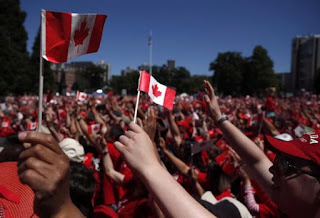 This year, in Ontario, Canada Day will be a bit strange. Doug Ford  has announced that the celebrations at Queens Park have been cancelled -- to save money. The suspicion is that he cancelled the event because his presence there would be greeted by a chorus of cascading boos. He's been running into a lot of them these days.

The Liberals -- who don't possess official party status -- have announced that the celebrations will go on. They will pick up the tab.

It's a reminder of the political landscape these days. Wherever you are in this country, enjoy the day. Despite the presence of politicians like Mr. Ford, we have a lot to celebrate.

It annoys me that he can escape from us but we can't escape from him. No doubt the lobbyists for the privatizers will be even harder at work while Doug and the worms who make up his cabinet are out of our sight and reach.

Dougie now knows, John, that "the people" are not impressed. So from here on in, he'll limit his exposure to them. He'll only appear at events like "Ford Fest," where he knows he'll face a friendly crowd.