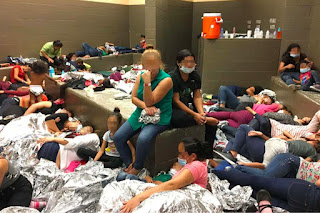 The Trump Administration stands for two things -- cruelty and corruption.  What is happening on the southern border of the United States makes this abundantly clear. Paul Krugman writes:

Privatization of public services — having them delivered by contractors rather than government employees — took off during the 1980s. It has often been justified using the rhetoric of free markets, the supposed superiority of private enterprise to government bureaucracy.

This was always, however, a case of bait-and-switch. Free markets, in which private businesses compete for customers, can accomplish great things, and are indeed the best way to organize most of the economy. But the case for free markets isn’t a case for private business where there is no market: There’s no reason to presume that private firms will do a better job when there isn’t any competition, because the government itself is the sole customer. In fact, studies of privatization often find that it ends up costing more than having government employees do the work.

Nor is that an accident. Between campaign contributions and the revolving door, plus more outright bribery than we’d like to think, private contractors can engineer overpayment on a scale beyond the wildest dreams of public-sector unions.

And what about the quality of the work? In some cases that’s easy to monitor: If a town hires a private company to provide garbage collection, voters can tell whether the trash is, in fact, being picked up. But if you hire a private company to provide services in a situation where the public can’t see what it’s doing, crony capitalism can lead to poor performance as well as high costs.


But cruelty and corruption serves Donald Trump's purposes. It scapegoats migrants and revs up his base. It may also get him re-elected.

Email ThisBlogThis!Share to TwitterShare to FacebookShare to Pinterest
Labels: Trump On The Border

"Between campaign contributions and the revolving door, plus more outright bribery than we’d like to think, private contractors can engineer overpayment on a scale beyond the wildest dreams of public-sector unions."

For a moment there, the name 'Lavalin' flashed through my mind.

And yet, these same contractors seem to need a continual "leg up" in order to compete for contracts, particularly once they try to obtain them outside of our country. Lastly, there is always their final pitch for more financial assistance because, you know, "its the jobs, boss".

It's all about returning to the Law of the Jungle, Lulymay.