A Fool With A Purpose 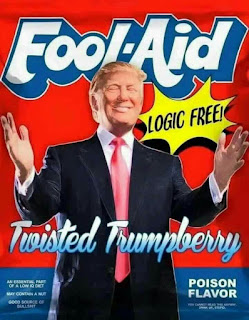 In a recent interview in Truthout, Noam Chomsky declared that Donald Trump is history repeating itself as farce. Jacob Sugerman writes:

Even for Donald Trump, the remarks were almost staggering in their density. Last month, in an exclusive interview with the Financial Times, Russian President Vladimir Putin declared that Western liberalism has “outlived its purpose,” adding that “it has come into conflict with the interests of the overwhelming majority of the population.” When asked during the G20 summit in Osaka if he agreed, Trump offered this gleaming ruby: “[Putin] sees what’s going on—I guess if you look at what’s happening in Los Angeles, where it’s so sad to look, and what’s happening in San Francisco and a couple of other cities, which are run by an extraordinary group of liberal people. I don’t know what they’re thinking.”

Trying to deduce any kind of grand strategy from a president who confuses the West with California and believes the moon is part of Mars can feel like a fool’s errand, if not “the purest acid satire.” But as Noam Chomsky argues in an interview with Truthout this week, “there is a strategy”—one that has empowered the far right across the globe and ultimately endangers human life on earth. If Ronald Reagan’s presidency was a tragedy, he speculates, then Trump’s is history repeating itself as farce.


It's clear that Trump's thinking is a junkyard mess. But Chomsky finds a purpose behind it all:

For Chomsky, Trump’s presidency poses an existential threat, and the evidence is in his embrace of the worst actors in the Middle East. He also cites adviser Jared Kushner’s “Deal of the Century,” which calls for nothing less than the complete capitulation of Palestine.

“These objectives fall within a broader strategy of forming a global reactionary alliance under the U.S. aegis, including the ‘illiberal democracies’ of Eastern Europe [Hungary’s Orbán, etc.] and Brazil’s grotesque Jair Bolsonaro, who among other virtues, shares with Trump the dedication to undermine prospects for a livable environment by opening up the Amazon—’the lungs of the earth’—to exploitation by his friends in mining and agribusiness,” he concludes. “That’s a natural strategy for today’s Trump-McConnell Republican party, well ensconced to the far right of the international spectrum, even beyond the European ‘populist’ parties that were not long ago considered a contemptible fringe.”


In the final analysis, Trump is a fool. Unfortunately, he's a fool with a purpose.

Nobody ever claimed that life was fair, Tal. The trouble is that Trump is in your face, making that point everyday.