The Problem With Billionaires 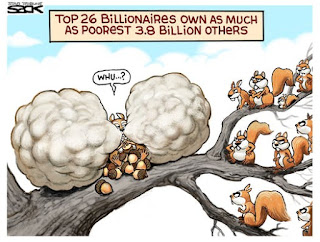 We live in a culture that exults billionaires. But billionaires, George Monbiot writes, are a problem:

All billionaires want the same thing – a world that works for them. For many, this means a world in which they are scarcely taxed and scarcely regulated; where labour is cheap and the planet can be used as a dustbin; where they can flit between tax havens and secrecy regimes, using the Earth’s surface as a speculative gaming board, extracting profits and dumping costs. The world that works for them works against us.

buy newspapers and television stations. The widespread hope and expectation a few years ago was that, in the internet age, news controlled by billionaires would be replaced by news controlled by the people: social media would break their grip. But social media is instead dominated by stories the billionaire press generates. As their crucial role in promoting Nigel Farage, Brexit and Boris Johnson suggests, the newspapers are as powerful as ever.


Recently, Monbiot has experienced the power of the billionaire press:

A month ago I and six others published a report commissioned by the Labour party called Land for the Many. It proposed a set of policies that would be of immense benefit to the great majority of Britain’s people: ensuring that everyone has a good, affordable home; improving public amenities; shifting tax from ordinary people towards the immensely rich; protecting the living world; and enhancing public control over the decisions that affect our lives. We showed how the billionaires and other oligarchs could be put back in their boxes.

The result has been four extraordinary weeks of attacks in the Mail, Express, Sun, Times and Telegraph. Our contention that oligarchic power is rooted in the ownership and control of land has been amply vindicated by the response of oligarchic power.

Some of these reports peddle flat-out falsehoods. A week ago the Mail on Sunday claimed that our report recommends a capital gains tax on people’s main homes. This “spiteful raid that will horrify millions” ensures “we will soon be joining the likes of China, Cuba, Laos and Vietnam in becoming one of the world’s few Marxist-Leninist states”. This claim was picked up, and often embellished, by all the other rightwing papers. The policy proved, the Telegraph said, that “keeping a hard-left Labour party out of office is not an academic ideological ambition but a deadly serious matter for millions of voters”. Boris Johnson, Philip Hammond and several other senior Tories weighed in, attacking our “mad” proposal.

But we made no such recommendation. We considered the idea, listed its possible advantages and drawbacks, then specifically rejected it. As they say in these papers, you couldn’t make it up. But they have.

There were dozens of other falsehoods: apparently we have proposed a “garden tax”; we intend to add “an extra £374 a year on top of what the typical household pays in council tax” (no such figure is mentioned in our report); and inspectors will be sent to people’s homes to investigate their bedrooms.


We've known for a long time that money corrupts. We should not be surprised by what big money buys.

Email ThisBlogThis!Share to TwitterShare to FacebookShare to Pinterest
Labels: Big Money In Politics

One thing that is abundantly clear after each election of a new right winger that this stranglehold is somewhat permanent until sadly, a generation dies off and hopefully saner heads see what the "billionaire class" has done to the world. Blame for all the world's ills lies at their feet and it's well past time that this be acknowledged. One need look no further than the southern border of the US where a puss sack con man has convinced a great portion of the country that dirt poor, desperate souls are responsible for the mess the country is in while the billionaires continue their pillage of everything great the country once stood for.

We have now reached the point where we cannot take anything printed or disseminated by our MSM or by most other 'organizations' large or small at face value Owen. How we can filter the lies and distortions from our daily reading is becoming a dilemma for any and all persons seeking the 'truth'!

.. we are low on credit or paper money..
so may have to eat my boreal caribou quarters ..
Thinking Honey Mustard may improve the alloy taste..
Dash of horseradish ? Or dollop ?

If we have to eat our money or bitumen
can we not solve the taste issue ?
Hell, we invented insulin.. !

For the wealthy, waterboy, the poor are the enemy. Their conditions are a glaring indictment of the corruption of wealth. Every once in awhile, there appaers a wealthy person who believes in "noblesse oblige." But, for most, the prime directive is "rape and pillage."

It's not easy to seek the truth, Rural. There has always been an army of sycophants willing to cloud and obfuscate for what Teddy Roosevelt called the "malefactors of great wealth."

Three examples of men who saw what was behind "the white man's burden," sal. Unfortunately, the "burden" has not disappeared.


In the library of Parliament, beneath a layer of dust, you'll find the Davey and the Kent commission reports on the media in Canada. Both specifically rejected what has emerged in the meantime, the modern corporate media cartel.

Black launched NatPo but CanWest turned Black's empire into a tight, centrally controlled monster. Papers from Victoria to Halifax were all publishing the same editorial written in some strip mall in Hamilton. That was the Aspers.

In major markets it was not uncommon for the dominant TV, radio and newspaper outlets to be cross-owned. Blanket domination of an entire urban market. That was certainly prevalent across the western provinces and the Maritimes.

Here you have a captive audience left with one voice. Imagine the power of that voice not only to the corporate owner but to those it can benefit. That's when the media transformed from the watchdog of government into government's duly pampered lapdog. That's when the media stopped serving the public interest and instead began working for political and other narrow interests such as the Canadian Association of Petroleum Producers.

When you hear but one voice it can be more difficult, for some, impossible, to discern information from messaging. Unchecked it is easy to transform news into messaging and that bit of alchemy is worth a lot of money and favours to those it can be used to serve. Monbiot shows how easily that's done.

Davey and Kent expounded on the vital link between a healthy democracy and an electorate with generous access to the greatest range of information and opinion from across the entire political spectrum. That is the key to enjoying an informed electorate that can give informed consent to be governed when they turn out at the polls.

The corporate media cartel and its patrons work to subvert informed consent. There's no money in that. So they work at cross-purposes to the public interest. There's a reason that, across the land, newsrooms now stand largely empty. Who needs journalists for their purposes?

I had hoped that this Liberal government would tackle this disease on our democracy when it ousted Harper. Then again, I had high hopes it would do many things and it has not.

You often hear the lie that we need a cartel because, without it, there'll be no newspapers. I know you read the Victoria Times Colonist. It fell into the hands of PostMedia and was failing. Local owners got together, a community sort of thing, and bought it. It's doing much better now. The same for the former CBC/CTV television outlet, CHEK. It was going down too. Imagine, a provincial capital without a newspaper or a TV station. CHEK too was bought by a partnership of employees and local investors and it too is doing well.

I rejoiced one morning when I picked up the TC at my doorstep and there, the lead story, Tony Bennett's concert the previous night in Victoria. It was wonderful. I knew you would never see that in a cartel paper. Just the sort of thing with your morning cup of coffee.

Teddy Roosevelt knew long ago, Mound, that wealth seeks to protect its interests by casting a wide net and concentratring power at the centre of that net. He sought to destroy that concentration. But, a century later, it has returned with a vengeance.

Linda had it weighed up some time go.

Poor old Monbiot. Worked on a report commissioned by Labour. Then was attacked like a dog. Now he must know how Labour leader Corbyn feels being labelled an anti-Semite without any justification whatsoever, by all the UK press, including his employer the Grauniad, the dear old establishment Auntie Beeb, and the Labour Blarite neoliberals frustrated by the fact that the damn average Labour Party member has twice reconfirmed his leadership on direct vote against their express admonitions not to do so. That's because you cannot fool anyone with an ounce of common sense that Corbyn is a bigot. It's obvious he isn't. The Guardian is solidly neoliberal as an EU supporter. But from neoliberals up to the aristocrat level in the UK, the media in the UK is solidly anti-socialist, anti Russia, anti China so any bullsh!t you read there is of one voice at heart.

If one feels that not allowing media concentration in Canada is the way to go, the UK shows it hardly matters. Despite different ownership of various outlets, they're all of one voice. All owned by the big boys, or in the government bureaucracy's pocket. The Guardian is at least anti-Boris, but they're Remainers.

The Bighead of Britain leading the polls for PM has threatened China over Hong Kong. How the Chinese must laugh - in 6 months the UK will be a minor nonentity like Canada which can be crassly insulted and sanctioned with total impunity. That'll cause a few heads to rattle around in Whitehall in utter rage until they realize there's not a damn thing they can do about it. Trump will go missing in action as a supposed friend.

Trump is trying to break up the EU because who wants a powerful competitor when you're exceptional? With Blighty gone, and threats to sanction Germany over Nordstream natural gas from Russia, the US is well on the way to breaking up Europe into warring factions. The Chinese like that trend too. They've got the dough and will buy up the really weak states.

It's equivalent to union-bashing and an enforced mimimum wage for individuals with no "friends". The big eat the small and Blighty is happily shooting itself in the foot vying to be the first casualty of a new age.

Doesn't stop the Guardian being

Linda always hits the nail on the head, TB. And, as she and her co-author say, the issue of inequality seems to have disappeared from the public debate.

For a brief time after World War II, BM, we lived with the illusion that the Big would let the Small develop with some independence. That illusion was quickly put to bed.