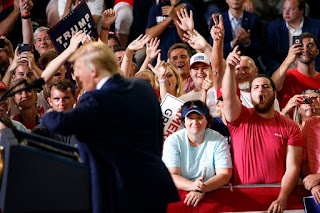 What is it about “send her back” that suddenly crossed a line? Consider the timeline:

Trump tweets that the lawmakers should “go back” to their countries, characterizing them as corrupt hellholes (echoing his “s----hole countries” comment), even though three were born here. That elicits only a bit of discomfort from Republicans.

Trump then says, “if you hate our country, if you’re not happy here, you can leave.” Trump repeats this: "YOU CAN LEAVE!” Republicans defend this framing, piously pretending it has no racial dimension, even though it was directed at only minority lawmakers.

Trump presides over the “send her back” chant. After criticism erupts, including among some Republicans, Trump pretends to “disagree” with it.

Why did the last open the floodgates? The Times tells us Republicans fear telling lawmakers to get out will “backfire” because it appears “personal.” Yet Trump had repeatedly said to “go back” and “leave.”

What changed? Well, the Times also reports that Trump advisers privately warned against letting these sentiments get out of control at his rally.

So I submit to you that the key difference is twofold: Trump’s naked hatred and cruelty was captured on live television, and along with it, so was the seething anger of the hard-core Trump base.


Television exposed Trump's white hot hatred. And it exposed his supporters in all of their ugly ignorance. The whole thing looked disturbingly like a Nuremberg rally.

Image: The Washington Post
Posted by Owen Gray at 9:15 am

Email ThisBlogThis!Share to TwitterShare to FacebookShare to Pinterest
Labels: Trump And Republican Racism

It seems as though the Republican establishment, from McConnell on down, has let this go too far. They're in too deep. Trump has harnessed them into his service. How do they get back out of this rabbit hole unless the Dems take back the White House? Even then what have they got left in their repertoire but subversion on the same scale they exhibited during the Obama years? They're just a bag of nasty. It has consumed everything else.

There are those who have compared the current rhetoric coming out of the U.S administration to that occurring in Germany in the early 40s, whilst the actors on both the sending and receiving side are different now than then the general tone is far too similar to be ignored. I truly hope that I am wrong in my assessment, Owen, but fear that I am not, we must be ever vigilant that the 'rot' does not spread further north than it already has.

You can hear the echoes of Trumpmania here, Rural. It's a virus that spreads quickly.