A Time For Sublime Madness 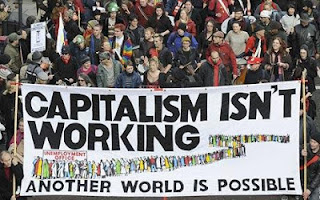 Chris Hedges believes that we face a dark future. What awaits us is an era of upheaval:

The planet we have assaulted will convulse with fury. The senseless greed of limitless capitalist expansion will implode the global economy. The decimation of civil liberties, carried out in the name of fighting terror, will shackle us to an interconnected security and surveillance state that stretches from Moscow to Istanbul to New York.


There is every reason to despair. But, he writes, what has saved us in the past is our power to imagine a better future:

It is the imagination that makes possible transcendence. Chants, work songs, spirituals, the blues, poetry, dance and art converged under slavery to nourish and sustain this imagination. These were the forces that, as Ralph Ellison wrote, “we had in place of freedom.” The oppressed would be the first—for they know their fate—to admit that on a rational level such a notion is absurd, but they also know that it is only through the imagination that they survive. Jewish inmates in Auschwitz reportedly put God on trial for the Holocaust and then condemned God to death. A rabbi stood after the verdict to lead the evening prayers.


At first blush it all sounds rather silly -- a flight into fancy in the face of disaster. But Hedges is serious; and, theologian that he truly is, he turns to Reinhold Neibur to make his point:

Niebuhr wrote that “nothing but madness will do battle with malignant power and ‘spiritual wickedness in high places.’ ” This sublime madness, as Niebuhr understood, is dangerous, but it is vital. Without it, “truth is obscured.” And Niebuhr also knew that traditional liberalism was a useless force in moments of extremity. Liberalism, Niebuhr said, “lacks the spirit of enthusiasm, not to say fanaticism, which is so necessary to move the world out of its beaten tracks. It is too intellectual and too little emotional to be an efficient force in history.”


It is in the imagination that there is salvation:

It is only those who can retreat into the imagination, and through their imagination can minister to the suffering of those around them, who uncover the physical and psychological strength to resist.


Hedges is not preaching a turn the other cheek theology. His creed drove Christ to throw the money changers out of the temple. Like Christ, Hedges does not preach violence. But he does preach resistance -- because, in the end, our only option is to resist.


And that means that the power brokers will claim that we are sublimely mad.

Do you really think the power brokers expect to be exposed, vilified, sued, punched hard in their flabby sanctimonious tummy's, ridiculed or parked on their arses then led from the ivory towers, corporate towers and parliamentary chambers.. to the sobering sidewalk?

When you suddenly park these political animals on the sidewalk, its funny how reticent they would be to call Arthur Hamilton and say they want to take the population of Canada to court, to get their jobs back... and claim that we are all completely mad

When its their money.. and not Canada's money they're spending.. things look awfully different. Not at all rosy

It's all about privatizing profits and socializing loses, salamander.

These folks like to sell the myth that they are only being good citizens.

I am always inspired whenever I read something by Chris Hedges, Owen. Thanks for posting this, as it is a potent reminder that we are never quite as helpless as the powers-that-be would have us believe.

I took note of your recent post which linked to the interview in the United Church Observer, Lorne.

And I remembered what Churchill said about Ghandi. He was, said Winston, "a naked savage."

Churchill's perceptions could be quite accurate. But, when it came to Ghandi, Winston was out to lunch.

The assault on liberal arts and fine arts makes much sense in light of what Hedges says - why fund the education of the "mad people" when training them for business interests is effecient and generally does not lead to emotion, reason, or analyses?

The problem with funding the liberal arts, Chris, is that they train people to think critically. And critical thinking -- whether it be in the old Soviet Union or in modern Conservative Canada -- is a symptom of "madness."

The liberally educated refuse to cow tow to authority. And, therefore, they are dangerous.

Owen, with all due respect "kowtow"- https://en.wikipedia.org/wiki/Kowtow.

As many farmers will tell you 'cows' do not 'tow' well.

Thanks, Dana. I missed that one completely. And I apologize to any cows who, by nature, refuse to be towed.

To see Sublime Madness in all it's glory, PLEASE, check out Mavis Staples- "Keep Your Eyes on the Prize" via Youtube. Thank you...

Thanks for the clip, Linda. You reminded me of the time I was a graduate student -- over forty years ago -- when I lived not too far from that Woolworth's store.

And today Obama is in the White House.

When I watch it, and see the dogs, the fire-hoses, the kicks and punches to the heads, the Klan, their imprisonment, then see how the freedom fighters weren't beaten down or 'captured', it sure moves my spirit; we still have a way to go. You must have seen a lot, living there...

I was a student teacher back then, studying at the University of North Carolina, and they sent some of us to Greensboro.

A little less than a decade earlier, Jesse Jackson had led the sit in at the counter of that Woolworth's.

Owen? Another take on Sublime Madness--Eddie Izzard on Christian singing via Youtube!

Izzard has no patience for Christian hypocrites, Linda. There are many.

But, thankfully, even a flawed man like King was a true believer. And that belief made him sublimely mad.